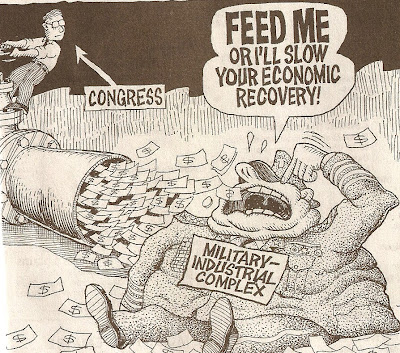 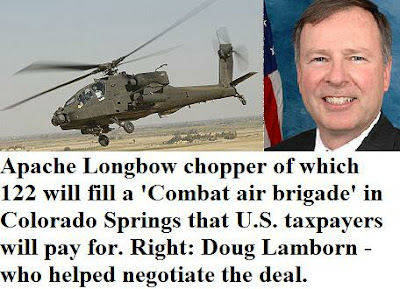 It always amuses me how so-called "fiscal conservatives" ,  numbered among the Repukes,  have no qualms about splurging gazillions on military toys, defense contracts and make -work for those in their districts.  They will be hell-bent against any infrastructure spending - despite bridges, water mains and roads crumbling in front of them - but bring on them F-35 bombers at $600m each! The more the better!

Enter now the city of Colorado Springs, long a shameless suckling on the teats of government to the tune of billions a year for military support and expenditure. The irony is most of its burgers are ideological (social-economic) conservatives who find no irony in bitching, moaning and pissing about the economically vulnerable, kids or homeless receiving food stamps- though they themselves collect hundreds of times as much in terms of fat military contracts, special benefits, pensions or spinoff largesse.....which is essentially the same thing. So while they bemoan the "Nanny" state to which the poor are driven, they overlook the "Pappy" state which sits them on its knees and doles out goodies galore.

The  'doyen'  of the Springs, continually re-elected because of the military welfare he provides,  is Doug Lamborn, who was quoted yesterday in The Denver Post ('Defense Cuts Put Lamborn in Tough Fight'. p. 5A):

Which is bare bollocks, and also provides a nifty cover or excuse to further gut domestic spending - including food stamps for hungry kids - in the next round of the sequester in January.

To me, priority is defined by what comes first. If Lamborn really knew the Constitution he'd also have known that the Preamble comes before all else and it clearly stipulates the government is to PROMOTE THE GENERAL WELFARE.  Not "military welfare" or "corporate welfare" - and that general welfare embodies all those domestic spending components that Lamborn and his ilk would piss on: health care, infrastructure maintenance, social insurance for the poor. Those are also the things, interestingly, that contribute most directly to domestic security. You have a Bird Flu contagion and you really want to see 47 million sick and without care because they can't afford it? Only a nut would argue that is less of a security threat than a localized terror attack.

But this is the shtick Lamborn uses to continually grabbing largesse for his 5th Congressional District, which pulled in $1.2 billion in federal contracts through the 3rd quarter of the 2012 fiscal year, according to the Post article. Moreover, Lamborn isn't satisfied, he still wants more, in the form of  $1 billion for a dubious combat air brigade (CAB) that's putatively there to "support operations in Afghanistan by training Apache helicopter pilots".

This despite the fact that an ongoing environmental assessment hasn't even been completed, and hey - we're supposed to pulling out next year!  Meanwhile, hundreds of questions need to be addressed, including: How is such a unit to be accommodated on the given location and what will be the training parameters? How many flights per day? At how much social, environmental cost? What if two choppers crash into homes per month? How much fuel can be dumped if need be and where? Who will pay for any damages and what about insurance? What are all the impacts associated with this? Of course, the Army could escape all responsibility despite the 285-odd questions that demand to be addressed by simply issuing a FONSI ('Finding of No Significant Impact').

The Post goes on to note that the bulk of the $1.2 b already provided is tied to the military and  the military contractors. In other words, the Springs is now the "hub" of the Military Industrial Complex like Dallas was back in 1963. This is according to the Center for Effective Government.  This included a $246 million contract to Northrop Grumman and $97.6 million to Lockheed Martin. Meanwhile, Springs' roads are pot-holed, the water mains are 100 years old and haven't undergone major refurbishing, and bridges are near collapse in several places.  Oh, and the schools are over-crowded from having to close several middle and high schools last year owing to lack of funds.

Is Lamborn bothered? Hell no! He wants to go full tilt come January when further defense cuts are on the block,  and according to the Post, "intends to find other places to chop, including entitlements like food stamps and Medicare, to shield the military."

Never mind tens of millions of kids across the nation are already having to go to bed hungry thanks to the existing sequester, now having been combined with the end of a SNAP stimulus Nov. 1. I am sure all those kids, appreciate Dougie's manifest "Christian" concern, not to mention all the seniors on Medicare who Lamborn wants to pay more for their drugs, treatments and therapies. Cancer? Hell, let the old farts throw the dice, we can't afford to allow radiation treatments, chemo or anything else. Better them dead than my military defense contracts!

Speaking of which - and according to the Post (ibid.):

"Lamborn receives his heftiest campaign contributions from military contractors. Just in this election cycle, Lockheed Martin and Northrop Grumman- both with offices in Colorado Springs - gave him a combined $10,000, according to the Center for Responsive Politics. He has also received contributions from Honeywell International and Boeing."

Of course, this embodies the very core of the corruption Eisenhower warned about in his January, 1961 Farewell address, referencing the "Military-Industrial Complex" and its "undue influence in communities throughout our nation."

Does Dougie care that roads are falling into potholes, that 11,000 kids in the Springs have to go to school every day on empty bellies, or that sewer lines regularly burst because of disrepair or the schools themselves are over crowded? Dougie's predictable response, as quoted in the Post:

"My votes on the military are for national security first and foremost ....and then I think about the district."

Thanks a heap, Doug. It's too bad we have too many stupid fuckers living in this burg who don't realize what side their bread is buttered on and keep voting your sorry, parasite ass into office.