We return now to the Ridley Scott- directed effort on NATGeo, Killing Kennedy. We resume with the elements it goofed up, got wrong:

In this long since dunned canard, Lee is seen carrying wrapped curtain rods (supposedly his mail order rifle) , and tells co-worker Wesley Buell Frazier the same when he'd been collected for work at the Book Depository on the fateful day.  But as Prof. David Wrone points out, writing in The Journal of Southern History (6), February, 1995:

"100 percent of the witness testimony and physical evidence exclude Oswald from carrying the rifle to work that day disguised as curtain rods. Posner manipulates with words to concoct a case against Oswald as with Linnie Mae Randle-   who swore the package as Oswald allegedly carried it, was 28 inches long, far too short to have carried a rifle. “

This is important  because it shows again how brainwashed many are, especially the media, by the Warren Commission's nonsense.


4) The shot sequence from the Texas School Book Depository:

In the shot sequence we see Lee at his sniper's nest with his Mannlicher-Carcano looking out the 6th floor window. Trouble is, it's a clear, unobstructed view ca. 2013, not with a branch impeding as it was on Nov. 22, 1963.  In other words, not even a top crack sharp shooter could have made the shots in such conditions - and as we will see in part (6) of the FAQ, the highest rating Oswald ever got was 'marksman'.

Anyway, as we behold the shots occurring through the cross hairs of the rifle, we detect:

Shot #1 hits JFK in the base of the neck, then it exits his throat and we see Kennedy (played by Rob Lowe)  grabbing at his throat. Of course, those who have read my FAQ (5)  on the bullets, wounds will see this doesn't play: the base of the neck wound was fabricated when Gerald Ford - one of the Warren Commissioners - altered the original autopsy draft (approved by Kennedy's physician, Dr. Burkeley) effectively raising  the position of the actual bullet wound from the upper back to base of neck. In addition, I noted surgeon Malcolm Perry pointed out that the throat wound was actually an entry wound, not exit.

Shot #2 seen through the cross hairs doesn't appear to land anywhere in the field, so we have to conclude this must be the missed shot that hit the curb near the Triple Underpass and sprayed bystander James Tague.

Shot #3 is supposed to be the head shot but this isn't evident from the cross hair sighting. Also, there's no remote appearance of the rear of JFK's skull being blown out (see FAQ (5))  which is visible in the actual autopsy. The missing fragment of (rear) skull was actually corroborated by Parkland surgeon Charles Crenshaw in his book, 'JFK: Conspiracy of Silence'.

Crenshaw's assessment of the head wounds(more massive in the rear) was fully supported by other Parkland surgeons. Dr. James Carrico, for example, has referred to "shredded, macerated cerebellar tissue" in his Warren Commission  testimony. Later,  in his 1979 House Select Committee testimony he noted  "one could see blood and brains, both cerebrum and cerebellum fragments in that tissue".

Dr. Charles Baxter, in his account, noted: "the rt (sic) temporal and occipital lobes were missing" .

The explicit report of the "occipital bone" missing would comport with the statements of Drs. Carrico and Crenshaw (in his book) and also with the finding of the occipital bone fragment - which had clearly been dislodged. Later work by Dr. Randolph Robertson, reported in the journal  Advance for Radiological Science Professionals, May 16, 1994,  did confirm all of the above, and the original wound placement as the Parkland Drs. reported .

Bethesda lab technician Paul O'Connor also took care to make a sketch of the skull at the Bethesda autopsy: 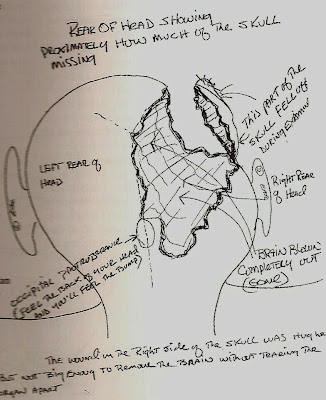 Floyd Riebe, the medical photographic technician who took photographs of the body at Bethesda, also noted the President had a "big gaping hole in the back of the head" . He further indicated it displayed more damage than could possibly be done by a military jacketed bullet. The bullet was more likely the explosive or frangible type.

. A pathologist later identified the Harper bone fragment as a piece of occipital bone. (An image of the Harper bone fragment is shown on page 34 of Killing of a President by Robert Groden.) In her sequestered Warren testimony Jackie said: "just as I turned and looked at him, I could see a piece of his skull  and I remember it was flesh colored. " None of this was shown, nor do we see Jackie clambering over the rear of the trunk.  (Of course, this would have shown the shot had to have originated from the grassy knoll not the School Book Depository)

The flick shows Oswald hiking down N. Beckley St. when a cop pulls up to the side of the road and stops him, eventually demanding he present himself for a search. Oswald takes out a revolver and fires several shots, killing Officer J.D. Tippit.  The trouble is Oswald had nothing to do with it.

Tippit was shot to death in Dallas' Oak Cliff area, at the intersection of 10th Street and Patton Avenue - of that there is no doubt. The question is:  WHO did it? Officer Gerald Hill had custody of the .38 supposedly found on Oswald - but given the existence of the Oswald "ghost" photo (at Dallas P.D. HQ - see my March 13 post for the image, details) this could well have been a plant. Hill testified to the Warren Commission that he'd found six live rounds in the chamber and two empty cartridges  (that came from an automatic weapon) at the murder scene. (Revolvers don't discharge shells after firing)

Given Oswald failed a paraffin test for nitrate residue, and given the preceding account, the evidence indicates Oswald never fired a gun that day, period. Full stop.  Further, all the original witnesses asserted in  their original statements to the Dallas cops that the man who fired on Tippit did not resemble Oswald - but rather a heavy set guy.  The Warrenites, however, made sure to use only the "Oswald dunnit" witnesses in compiling  its specious record. This was a given since they were hell bound to find for the lone nut malarkey.


6) FBI Agent James Hosty shows Oswald a photo of himself in Mexico City:

This is after Oswald was arrested at the Texas Theater, and brought into custody at the Dallas PD - there confronted by Hosty and Police Chief Jesse Curry. Hosty takes out the putative photo and lays it on the table, shows Lee  - but if one freeze frames the image it is obviously the impostor seen in the only available Mexico City photos. (See the FAQ (2) on "Oswald's Sheep-dipping" - also last month's post on "The Pre-Assassination Framing of Lee Harvey Oswald- Pt. 1)

Oh, there was one fleeting scene the flick got right:  when it showed a Dallas cop sitting down at the bar at Jack Ruby's  Carousel nightclub, referring to JFK as "a traitor". It is well known most Dallas cops at the time were either in the KKK or part of the Dallas White Citizens' bunch and they viewed Kennedy as a traitor after he federalized the National Guards in AL, MS to permit integration. (See also Walt Brown's chapter 'Blue Death' in his book, Treachery in Dallas).

Posted by Copernicus at 1:24 PM