So How Bad Is The Trans-Pacific Partnership?

It has come to attention that although I've raked Obama 'over the coals' for his support of the Trans-Pacific Partnership trade deal, e.g.

Few may actually understand why it is so bad and must be avoided at all costs. In this post I want to elaborate on multiple aspects of the TPP and why Obama needs to come to his senses and join the rank and file of REAL Democrats - as opposed to demo-Rats, Republicans (Mitch McConnell actually cheered Obama for standing with the repukes), Wall Street and the multinational corporations.

Let's examine the TPP via a number of questions in a kind of FAQ - or at least SAQ (sometimes asked questions) understanding from the outset that nearly all the information gleaned thus far has come from Wikileaks:

1. What nations are involved and how extensive is it?

Let's take the extensive part first. This is the largest trade deal ever negotiated by the U.S. - dwarfing even NAFTA. In fact, it's been referred to "NAFTA on steroids". There are 12 nations involved including: Canada, Australia, Japan, Vietnam, Mexico, New Zealand, Chile and Peru - all of whose GDP collectively encompasses nearly 40 percent of global gross domestic product.

2. What would the TPP do, in a general sense?

If passed, the TPP would expand trade over the Asia-Pacific region - particularly removing tariffs and investment barriers. In particular, the deal would enormously increase exports of liquefied natural gas. (See my next blog post on the problems with storing natural gas even in the U.S. on account of methane leaks)

Obama and 99 percent of the Republicans and 100 percent of all Neoliberals who want the world ruled by markets in a New World Order where the 'dictator'  of the  marketplace exists everywhere. Specifically, it has the backing of big corporations such as:Halliburton (prime beneficiary of contracts farmed out during the Iraq War), Monsanto (prime producer of GMO seeds and foods, including those that generate their own pesticides), Apple, Facebook and Coca Cola, as well as agro-industry groups.

4. Who opposes the TPP and why?

Ninety-nine percent of REAL Democrats (as opposed to "wine and brie" Neolib dems), 100 percent of liberals and socialists, labor unions, environmental groups, as well as small and local food producers since it will weaken domestic environmental regulations while boosting corporate power. Also, it will pressure lower wages in the U.S. since workers here will have to directly compete against workers in Vietnam who may only earn 68 cents an hour. Thus, like NAFTA, the pressure will be on to expedite a rush to the bottom - with corporations using labor in the cheapest trade partners opposed to more costly home-grown.

5. What are the main opponents' complaints?

-  The Environmental chapter sets a terribly low bar with the measures falling way below U.S. standards for trade deals. Interested people can find out more at:

And also send a message to congress critters.

In addition, the deals rely mostly on voluntary protections.

- We would face unlimited fracking, literally fracking on steroids with jet afterburners - and most of the U.S. turned into a moonscape without available water in 20 years. This would occur becausxe all oil from shale and natural gas would be automatically approved as "free trade goods".

- All local bans on fracking as well as New York's ban could conceivably be challenged since the TPP would allow foreign governments to sue if fracked oil or gas quotas were not met.  According to Jake Schmidt of the NDRC, "the threat of massive payouts to corporations would have stifling impacts on existing and future bans."

Already, in a kind of stupendous joke, the FDA allows the labeling of 64 different fish species as Grouper - the 4th most prized fish served at restaurants in the U.S. This means, in effect, what you may be getting may not be real Grouper at all but a poor substitute for which you're still paying top money. Seems that just as the FDA sees no difference between normally grown crops and GMO crops, it sees no difference between real Grouper and 64 imitations!

But that's not all. The TPP would also undermine the U.S. country of origin labeling (COOL) which ensures packaged beef, pork and lamb is labeled with where it's really from. BUT - what if the beef seeps in (improperly labeled) from a nation where Mad cow disease is still prevalent, or the pork enters from a place where trichinosis is rife? (Bear in mind live animals could be allowed to be imported - bearing foreign parasites, bacteria or other infections.)

If country of origin labeling is compromised you wouldn't know the difference when you dig into that rib-eye or pork chop!


How close are we to this trade holocaust? Close! A fast track vote (which Obama is pushing for along with the Repukes) is already on the line.  Fast tracking means congress only needs to vote yes or no on the TPP once all nations finalize the pact. After this vote no further amendments are allowed. Already the Senate Finance Committee and House Ways and Means Committee have approved fast track legislation this week. The full chambers will be expected to vote in the next few weeks. 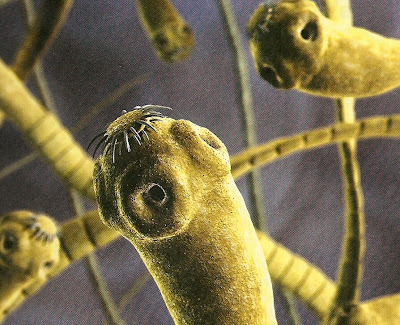 Parasitic worms of the type that could well be introduced with imported foreign livestock if the TPP is passed.

Would you really want these beasties hanging around in your beef or pork?

If not - then barrage your congress critters and tell them in no uncertain terms you want this crap deal nixed....in the bud!

Trade agreements like the Trans Pacific Partnership protect corporate investors but lead to even more off-shoring of American jobs.They make it safer for firms to relocate abroad – the Cato Institute describes such investor protections as “lowering the risk premium” on offshoring – thereby reducing corporate incentives to keep jobs in America