Five and a half years ago my dad, a World War II vet, passed away from pneumonia. Today, he's remembered for not only his war service (36 months in the Pacific Theater) but also his steadfast raising of a large family. Dad's military combat was waged on two fronts: against the Japanese Empire in the Philippines and New Guinea on the one hand, and against malaria on the other - with no fewer than five hospitalizations.

On the war front, Dad fought in the Battle of Buna, which was even bloodier than Guadalcanal, but which gets little attention from WWII historians these days. Dad - and many others - would add that he fought in the only "just War" in recent history - given that the Allies were lined up against a genuine, formidable foe, equipped with warplanes, tanks, destroyers, U-Boats, aircraft carriers - not just IEDs- intent on global domination.

Being a "good" (just) war also meant national sacrifice. It de facto  meant not only mass rationing for then citizens in the States, but also higher taxes to fund the war effort. To fix ideas, some numbers can help concerning World War II:

- A total of 16.1 million served, of whom 6.1 million volunteered - including dad (over a year before Pearl Harbor)

- In 1950, 28 percent of all men 18 and over were WWII veterans - while today barely 1 percent of men and women are active duty military.

The preceding are all based on Census data, but it actually understates the wartime mobilization. For example, looking just at men aged 15 to 39 in 1940 (my dad was 20), between 50 and 60 percent served in World War II.

These stats disclose not only a massive mobilization in response to a real threat - but a collectively unifying dynamic not present today. The effort involved almost everyone, and even if you weren't in uniform you were likely in a factory welding tanks, planes .. .or using your ration books to purchase groceries while also paying higher taxes. NO one complained! As my dad put it, anyone calling for no taxes during the massive War effort would have been branded unpatriotic at best, and a traitor at worst.

Not one person complained about heavy new taxes during the four years of the U.S. fighting in the Pacific theater, or in Europe, though we've seen no similar pay-go with over thirteen years in Afghanistan. Nor did people bitch in the immediate post-war period when the high taxes helped to finance the Marshall Plan - to help pay for the reconstruction of Europe.

Meanwhile, in the aftermath of the War,  tax rates as high as 91 percent at the upper end helped finance the interstate highway system, new schools and other projects.

By contrast, since the launch of the two recent U.S. invasions and occupations (Afghanistan, Iraq), I have not seen one single tax raised to pay for them. This means the sacrifice is not spread out, and it also tells me that the politicians and congressional lawmakers themselves understood these were not real wars. If they did understand (and the wars were real), they’d find the means to pay for them, not impose the burden as a tax on future generations.

Indeed, one of the most cognitively dissonant recollections of the past fourteen years was right after 9/11 when on one side of their mouths the Bushies were describing it as the “worst attack since Pearl Harbor” and on the other side of their mouths, telling Americans to go out and do their patriotic duty by SHOPPING! (Bush also suggested going to Disneyworld. Seriously! The largest fantasy facility in the world and he insisted we take refuge there!)

Dad's final wish - at the time of his 89th birthday in May, 2009, and about two and a half weeks before he died, was that my book on the JFK assassination ('The JFK Assassination: The Final Analysis') be completed and published "even if it means an independent or self-publishing company".  He was that committed to it especially after reading several proof chapters before he fell ill.

From that fatal Sunday (Nov. 24, 1963)  Oswald was shot down in cold blood , he never believed Lee had a role in the vile killing of a President he loved and respected. In his own words: "He's just a workingman set up to be the patsy. Anyone who's ever hunted  ducks or geese knows you always have a decoy. That's exactly what he was!"

As for the Warren Commission Report, he never bought that pile of rotten fishwrap and said more than once it was "LBJ's protection from prosecution" (He'd followed the Bobby Baker scandal closely.)  When I told him I was dedicating the book to him he was overjoyed, "the happiest birthday" he'd had in some time.

Was dad, a decorated WW II vet, a "conspiracy kook"? Not in any way, shape or form - not even remotely. He was a fully trained, enlisted soldier,  familiar with the firing of rifles in different conditions under stress and knew Oswald's alleged feat didn't add up,  "especially with that damned Mannlicher-Carcano".  He knew, much better than the Warrenite fraudsters and groupies, what was feasible and what wasn't. Even before the files were released, and Gerald R. Ford had been shown to have altered the back wound position to the base of neck, e.g.

he knew the "single bullet' theory didn't fly. According to dad, and leaving out the expletives: "It was the biggest, $^#@*&! lie ever perpetrated on the American people!" 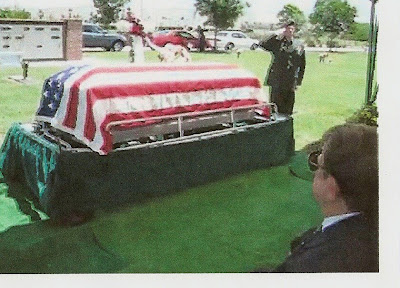 When dad died on July 12, 2009, I learned afterward (from my mom)  he'd left his collection of JFK books and memorabilia - including several mint condition JFK coins from 1964 -   to me.

Each day these items as well as service medals, remind me of his contribution to his country, and also how he will be sorely missed this Memorial Day. (Which falls on his birthday this year. He'd have been 95.)

His last wish was fulfilled with the  publication of my JFK book, for which he saw proofs for the Introduction, and Chapters 1-3 (before revisions in 2013). My one regret is that he never got to see and hold the final published edition.
Posted by Copernicus at 6:22 AM