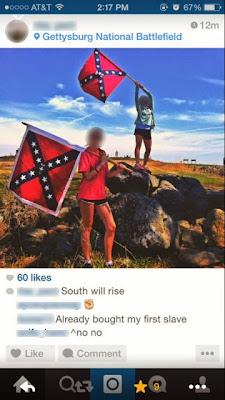 Okay, once more into the breach  - where I will bring up the recent escapade of two East Chapel Hill, NC high school girls who thought it was cool to send up Rebel (Confederate) flags while on a field trip to Gettysburg. To remind readers this was the site of one of the bloodiest battles of the Civil War (NOT the "war of northern aggression") and a rout ("Pickett's charge") sure to live in rebel memory as one of the worst. To be blunt, the Johnny Rebs got their heinies beaten so badly that they likely limped all the way back to the dregs from whence they came.

Anyway, the girls also made comments (on their FB page)  to the effect the "South will rise again" . Perhaps they haven't gotten the memo that essentially it HAS, culturally speaking.  Author Joshua Zeitz in his thoughtful article ‘Dixie’s Victory’(in The American Heritage Magazine, Sept. 2002), observed that although Confederates only got as far north as Pennsylvania, their “great-grandchildren have captured America’s culture”. Zeitz then went on to clarify pointing to NASCAR as well as “Country and Western music”, gun fascination- collection and bible –punching religion. In Zeit’z own words:

“In the mid-twentieth century the arrival of Southern rural traditions in the urban marketplace created a new breed of Southland culture that exploded onto the national scene. At the same time, the millions of white Southerners planting new roots in the North introduced the rest of the country to their conservative religious and political culture and to once-regional pastimes like stock car racing and country music. The consequences have been revolutionary.”

As I've noted before, most Southern idiosyncrasies (like NASCAR, country & western music, hayseed dancing) which I have zero use for, are more or less harmless pastimes, so I don't get off on thumping anyone for pursuing them, even fellow Yankees who embrace these "cultural affectations" (afflictions?). I have much more serious issues with the (now much more extensive) embrace of pro-Confederate style politics, including trying to cut the government down to the bone - oh, except to create armies to occupy sovereign nations- and rendering public workers little better than modern day sharecroppers or indentured servants.

So, let's clarify that I have far bigger issues with these political offshoot matters than a couple of Tarheel state high school girls expressing themselves in their own unique way. Indeed, as a fellow blogger noted, they are manifesting their rights to "freedom of speech". The question then becomes:  Are they aware of the possible future costs to that speech - including the use of a variant of Rebel flag- on what most Yankees regard as hallowed ground?

Well, at least one of the girls later recognized her faux pas and scribbled on her FB page a classic "sorry-not-sorry" effusion, stating,

“I’m sorry that my picture offended people and especially since my initial caption (that I changed once I realized people took it seriously), but I’m currently on the Civil War trip learning about the history of our country and this just so happens to be a pretty (expletive) important part of it. We were reenacting Pickett’s charge in which the South lost 85% of their soldiers. These aren’t the Confederate flags in fact, they’re the North Carolina regimental flags. I’m proud to be a part of my state and I’m sorry my photo was so offensive but I find it appropriate in that I’m honoring heroes that fought to protect their home and families. Thanks though.”

Nice discrimination, girly, re: the Confederate flag vis-a -vis a NC "regiment:" flag,  but I don't know that most yanks would necessarily make any distinctions with the real one! To us, all such crossed bar red flags are Confederate!

Ron Creatore - father of one of the girls -  said his daughter is now “dealing with people threatening her life and calling her some unseemly names,”  so this is not a good moment for the family to go on the defensive about her  actions.  Creatore said, “She didn’t at the time post it with any intention it was going to be perceived as racist… They want to use this photograph and my daughter’s involvement in this photograph as a vessel to promote a particular agenda. I won’t stand for my daughter being suspended because I don’t believe she’s done anything wrong.”

Well neither did Prof. Ward Churchill when he wrote his post 9/11 article "On Roosting Chickens" - comparing those in the twin towers - mainly traders- to "little Eichmanns" He also didn't believe he was doing anything wrong but he paid dearly for that belief in unfettered free speech when he lost his (tenured) job after a selective university witch hunt found evidence for "plagiarism".  This episode showed clearly why the theoretical right to free speech can be curbed, and isn't absolute. This is a lesson the girls and their parents are also learning - and the girls may well learn even more of in the future (more on this later).

Earlier this week, a group of Colorado high schoolers also made national news after they posted a photo on Facebook of themselves on prom night, holding guns and surrounding a Confederate flag. The caption was “The south will rise again.”   So the virus of  misplaced Confederate love appears to be increasing- but that's a separate issue from the fallout that all these misguided  kids are likely to face. Because in this country "free speech" isn't really free, at least in the sense of no future sanctions.

The question is: Are any of these kids aware of the possible future consequences to their current spontaneous free expressions? (Which may merely be done to get attention they're not able to find in a constructive way.)

The most probable blowback  - apart from the immediate social ostracizing and threats (NEVER acceptable!) - is that as adults they may be denied future employment opportunities. As I noted in a number of my previous posts, U.S. employers now -  as a matter of course -  scan Facebook and use Google when considering applicants. They will use those as a basis to exclude applicants if they perceive anything that doesn't fit in with their company or corporate culture.  Thousands of possible job candidates have already been dismissed from consideration based on posing in different stages of undress on their FB pages, or with liquor in their hands. Raising a Reb flag at Gettysburg may not be far behind.

Again, no one is saying kids (especially in high school) aren't entitled to free speech or expression, but they need to be aware that if they post such displays publicly - as on their Facebook pages or via Instagram -  there may be nasty blowback later. Are they prepared for the consequences,  maybe even not getting a decent paying job to pay off that college loan?
Posted by Copernicus at 12:56 PM