The Top Space Feat of the Past 45 Years: Landing on a Comet 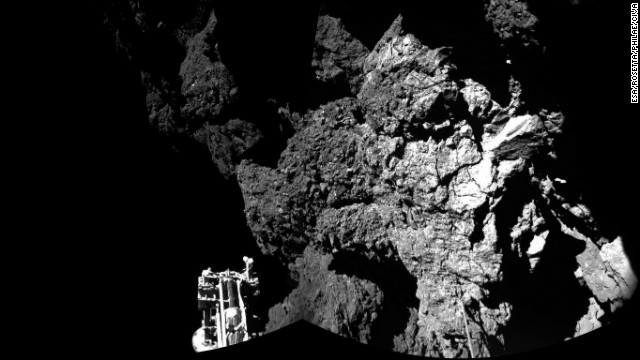 By now most every reader has seen the spectacular scenes of the Philae landing craft setting down on the surface of a comet: identified as Comet 67P/Churyumov with the approach described by the European Space Agency (which designed the craft and planned the mission) as "seven hours of terror" - as contrasted with the "seven minutes of terror" for the Curiosity touchdown on Mars.

Housing the landing craft was the "mother ship", nicknamed 'Rosetta'- which  was launched on March 2,  2004 and traveled 6.4 billion kilometres through the Solar System before arriving at the comet on 6 August 2014.  To say this feat, tracking a comet for 10 freaking years before catching up to it and landing is "astounding",  is nothing less than understatement. 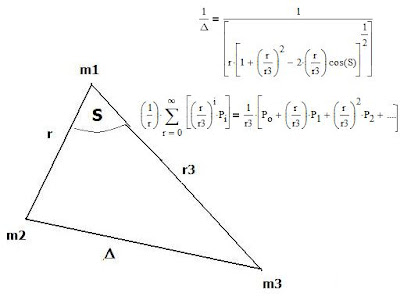 To the layman, unversed in the fine points of astrodynamics or the 3-body problem of celestial mechanics, the wonder may be what all the hoopla is about.

The diagram shown depicts the nature of the extended three body problem faced by the ESA team, long after launch and in the final approach phase. (The original conditions would have matched what we call a "four body problem" involving: Sun, Earth, spacecraft and comet.) In either case the mathematics for plotting an exact trajectory to the destination is formidable. (During my years pursuing an astronomy major it sent many students rushing to the registrar to change  majors - from astronomy to maybe chemistry.)

Thus, at this phase Earth is now at m1, the Rosetta spacecraft at m2 and the comet at m3. For the stage indicated, the m2-m3 separation distance D may be about one million km and closing as the angle S changes with it. (The angle S separates the r and r3 radius vectors and Legendre polynomials figure into the detailed computations).  The actual distance D of the comet from Earth was at 300 million miles.

While landing on Mars is formidable in itself, landing on a comet moving at 84,000 miles/hour over a 4 billion mile transit is vastly more so. Not so much because of the speed per se, which can be matched by the spacecraft using a "slingshot" effect (thanks to solar gravitation), but the time delay between successive command and control signals. In addition, it's because the comet's surface is volatile and vastly more uneven than Mars. The dynamical aspect has been compared to launching a tennis ball in New York and sending it around the world 160,000 times and landing it precisely in a relative's hand in Los Angeles. Think about that!

According to John Grunsfeld, Associate Administrator of NASA's Science Mission Directorate,  interviewed this morning on CBS:

"This is the first time we've ever landed on a comet, and the first time we've been up close and personal. People have cared about comets as long as there have been people. Ancient Chinese writings contain references to 'guest stars' portending bright futures, or wars or crop failures.

In recent years we've realized that comets are the building blocks of our solar system. They may be our only Rosetta stone, of what we are made of. The organics in comets could be the source of the water on Earth."

Heady stuff indeed! When asked what we hope to learn, Grunsfeld answered:

We have to wait and see how ultimately successful the mission is, which would be at least lasting 64 hours to make enough measurements. Up to now, we know the 'harpoons' to anchor the craft failed, so that its continued hold on the 2 1/2 mile wide object may be precarious to say the least.

If the mission fully succeeds, of which I am confident, we may finally see the extent to which comets had a role in contributing to our planet's formation.
Posted by Copernicus at 8:00 AM