In Memoriam: Some Images And Memories Of My Mother's Influence On My Life

The scope,  breadth and influence of one life on another's is often difficult to assess but preserved imagery helps, as when I took out a set of dozens of photos, triggering memories of my mother. Her death has elicited the need for some kind of closure, and since I was denied the chance to mourn her properly (see Monday's post) , the next best thing is to erect this small virtual memorial. This features a number of images from the past each of which gestates a memory of its own. A few photos are not of my mom per se but rather reflect her secondary influence. An indirect "proxy" reminder, if you will, of a choice made (or not made) because of her- or things accomplished (e.g. winning my high school's science fair)

The earliest walking photos reminded me of the time she spent with me not only in mastering the physical aspect of walking but also instilling curiosity. This she did by reading to me, everything she could muster,  Soon after she led me to The Book of Knowledge.   Therein devoured as many astronomy articles as I could.  It was an inestimable contribution to my future education and set me on the course to independent learning.

An early culmination of her efforts resulted in me winning the top Science Fair prize at Pace High:  Below, my project visible in this piece done in The Miami Herald.

Two months later it was the Pace Senior Prom, and I had planned to take Eileen (left-below ) who I'd already taken to Venetian Pool and other Pace dances. But mom wanted me to take Barbara - the daughter of a friend of hers instead. I agreed and we all had a great time at the downtown Everglades Hotel

Years later, I recalled from this photo above- taken in July, 1967-   - how mom arrived at my apartment on Canal St. in New Orleans (with the whole clan in tow) after I'd left Loyola to work for a couple years to save money. At the time she worried my food choices weren't the type needed for health so re-stocked my fridge with her own purchases. The whole family remained in N.O. for 10 days and at the end, she reminded me that while working for an oil company might seem terrific for now - it was not the end- and I had to go back to finish my degree.

I then became determined to do just that and with the push of a friend (who attended University of South Florida and worked at the same oil co.) I applied to enter as an astronomy major - affiliated with a department that had become one of the best in the nation, thanks to the Chairman: Prof. Heinrich Eichhorn, leading figure in the specialized field of astrometry.

Flush with enough cash, I left the oil co. in 1969 and completed my degree in astronomy with a minor in mathematics. The photo shows my proud mom with me outside the Beta dorm at the Univ. of South Florida.    Then four years serving in Peace Corps followed by my wedding to Janice, and the image below shows the two of us standing with mom and dad near the main table at the reception

The talk of everyone at the wedding reception was how mom - unable to control the mother in her- patted my hair (she sat in the church row behind us) to help eliminate some wild strands. After the wedding we got to show her and dad some of the island, before we went on our honeymoon.

They  got to see much more of Barbados when they returned in  December, 1988 - even going to Harrison Cave,

and Mom learning to surf while we stayed at a Bathsheba beach house.. 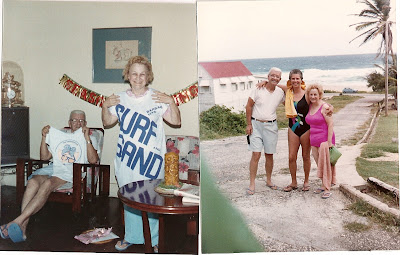 My last in person contact with mom was in July,2009 at the time of my dad's death and funeral. Two days after the funeral, I visited her in her Port Charlotte retirement home apt. and we poured through old family photo albums. The occasion was almost magical in the sense that her memory was vivid and she was lucid enough for us to have an extended conversation. Within two more years, this ability was lost as she grew more afflicted by the Alzheimer's that ultimately would claim her life.

Granted that none of us can really bring back the past , but let us agree that certain photos can trigger significant and not so significant events which thereby better help us to remember a loved one, especially a parent.
Posted by Copernicus at 7:27 AM