A Bad Omen Emerges From Senate Dems : Voting for Keystone Pipeline to Try To Save Landrieu 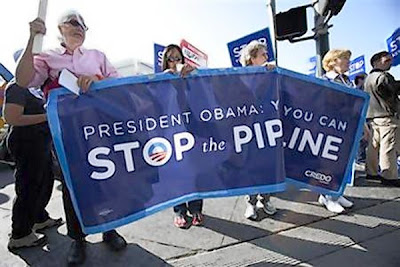 The idea that a minor political gain can create an opportunity for environmental catastrophe is one that now must be reckoned in by Democratic voters, as they behold Senate Dems prepared to cave in on the Keystone XL pipeline in order to (hope) Louisiana Sen. Mary Landrieu can retain her seat as that state election moves to a runoff. This was announced this morning on CBS Early Show as we learn - incredibly - that a number of Senate Democrats have "changed their minds" on the pipeline and the reason appears to be to toss their female D-counterpart a bone in the hopes she can keep her seat. (Louisiana is a huge oil and gas state as I can attest, having worked two plus years in New Orleans for an oil company in the late 60s).

But if this is what we can expect from the Dems as the Reepos assume a majority in the Senate next year, then we are all for the high jump. We can likely expect them to turn on a dollar on a number of key votes (maybe even the "Ryan Budget"), giving the Repukes the filibuster- proof majorities they need to even survive Obama vetoes. Sickening is the word that comes to mind, but again, why I left the Democrats to become an independent. (Back in 2002-03 when Tom Daschle's Senate Dems gave in to Bush on almost everything- from wars to budget -busting tax cuts.)

Why is this a misbegotten move?  As noted in an earlier blog: http://brane-space.blogspot.com/2012/11/bill-mckibbens-prediction-of-nightmare.html

Climate scientist Bill McKibben has developed models disclosing mathematical limits showing we have roughly 550 gigatons (gT) left of carbon we can deposit anthropogenically into the atmosphere before earthly hell is unleashed. That “hell” includes the runaway greenhouse effect, to turn our planet into an endlessly burning pile of ash and refuse. Given a current 30 gT/year deposition rate - and assuming we don't add to it, don't increase its rate - that leaves us roughly 18 years- give or take a fraction, before we end up in a likely runaway greenhouse world. It's a world no one or their offspring would want to inhabit.

Prof. McKibben,  in his November, 2012 appearance on Chris Hayes’ 'UP', noted the major contributor to push us into this hothouse hell is none other than implementation of the Keystone XL pipeline because of the concentrated carbon (from tar sands oil) it will unleash over years. To remind readers, this pipeline will deliver tar sands oil from Alberta, Canada to Gulf Coast refineries for export to an international market. The pipeline would have an initial capacity of 830,000 barrels per day and would leave a carbon footprint equivalent to building more than seven new coal-fired plants. By the time it reaches full capacity the enhanced carbon deposition will be nearly 3 gT/yr. In other words accelerating the timeline to reach the 550 gT maximum carbon load the planet can bear.

Despite misleading claims of “benefits” by TransCanada, the downsides of this ill-conceived project remain the same and include:

1)  Building a future of dirty energy,  hastening our pace toward an uninhabitable world. The fact is the Keystone XL is a massively detrimental dirty energy project that would open a major export artery for toxic tar sands oil across the for at least 50 years. In that interval, massive spills and contamination of our water supply (already threatened by fracking) will accelerate cancers and other endemic health problems.

2)  It’s an unnecessary risk. The itself doesn’t need this crap oil especially since we’ve reduced our oil consumption by nearly two billion barrels per day over the past five years. This stat will continue to improve with the growing number of electric and hybrid cars.

3) Water pollution: A planned Keystone XL pipeline would pass through Nebraska’s Sandhills region, endangering the Ogallala Aquifer, which forms the drinking water for millions as well the water source for one third of American agriculture. In other words, a massive tar sands oil spill could pollute not only the water but crops used for food consumption. During the tar sands oil extraction process, vast amounts of water are needed to separate the extracted product, bitumen, from sand, silt, and clay. It takes three barrels of water to extract each single barrel of oil. At this rate, tar sands operations use roughly 400 million gallons of water a day. Ninety percent of this polluted water is dumped into large human-made pools, known as tailing ponds, after it’s used. These ponds are home to toxic sludge, full of harmful substances like cyanide and ammonia, which has worked its way into neighboring clean water supplies.

4)Higher gas and food prices: TransCanada has admitted one of its goals is to raise oil prices in 12 midwestern states thereby increasing revenue to the Canadian oil industry by $2b to $4b. Meanwhile, farmers, who’ve already spent $12.4 b/ yr on fuel, could see expenses rise to $15b  if the pipeline goes through,  a cost which will surely be passed on to Americans as higher food prices.

5) Increased respiratory disease and cancer: The pollutants released by mining and refining tar sands will incept acid rain, smog and haze as well as other effects associated with lung disease and cancer. The solid or semi-solid waste, embedded in the toxic sludge, will unleash astronomic rates of kidney, breast, colon, pancreatic and liver cancers by the ingestion of the water soiled by the tailing ponds.

6) Climate disaster: Any future tar sands development – say via Keystone XL- will mean “game over” for the planet according to NASA climate scientist James Hanson. I already noted earlier how much extra load of carbon will be added and how it impinges the 550 gT critical threshold.

To his credit Obama has so far nixed this odious deal, which will only bring jobs for the very few (maybe 21,000 if that) and major hellacious environmental costs that would be a hundred times greater than the Exxon Valdez disaster if major leaks occur. Now, Obama must use his full authority (which no repug can stop) to kill this project once and for all, i.e. if the Senate vote falls short of the filibuster proof majority of 60 votes.

Just WHO is pushing this abomination on us? Giant oil corporations invested in Canada's tar sands and who have, as Bill Moyers stated in an April, 2012 appearance in on Bill Maher's Real Time, already contributed more than $47 million of campaign donations to Repukes and lobbying money to try to make it so. They are hoping that Americans will be too dumb or dense to see the hidden (and not so hidden) costs that will be extracted.

But evidently the Senate Dems don't see it that way. According to the CBS account:

"Louisiana is an oil and gas state and pipeline is very popular there. So Democratic leaders thought that giving Mary Landrieu something that she has been demanding might boost her chances back at home."

In other words, fuck the planet to (try to) preserve a Senatorial seat for the Dems. What kind of malignant political calculus is that? It's one that only a compromised political party - by too much corporate cash infusion- could dream up.  Even now the Repukes in the House are grabbing the language advantage for their own version of the bill by calling it the "Cassidy Keystone Solution" after Landrieu's opponent.

Make no mistake that this is serious. Approving this abomination (especially in a blatantly cynical political move)  will speed this planet toward an earthly hell partly captured in the initial scenes of the scifi flick 'Interstellar' and will be a threshold from which there is no turning back.

At that point the polar vortex, connected to instability of the Arctic ice cap from global warming, will be the least of your worries.
Posted by Copernicus at 6:45 AM