Harry Reid: Another Useless Punk Ass Wimp - As We Suspected. 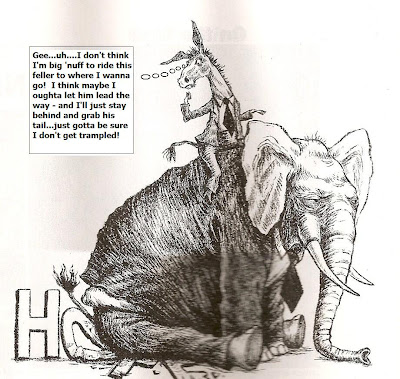 Why is it every time the Democrats are in the minority, especially in the Senate, they lose spine, become whores....errrrr....worms, and surrender power by refusing to do what the Repukes did when they were in the minority? OBSTRUCT! (In the repukes case it was to obstruct everything, while we need the Senate Dems to block only the most odious legislation - such as the Keystone pipeline and Ryan budget)

We saw this play out before with Tom Daschle's Dems in 2002, as they all rolled over and let the Bushies have their way  - allowing his odious tax cuts to go through (fully realizing how they'd make future funding for social needs problematical) and then approved Bush's illegal invasion in the Iraq War Resolution. It was enough to make a long time liberal puke and launched my departure from the Democrats to become an Independent (member of Democratic Socialists).

According to The Hill:

Reid: 'No desire' to obstruct GOP

Senate Majority Leader Harry Reid (D-Nev.) on Wednesday pledged to work with Republicans when they are in the majority and eschew the strategy of obstruction he has accused them of using against Democrats.

“I am ready, Mr. President, to work with him in good faith to make this institution function again for the American people. I saw firsthand how a strategy of destruction was debilitating to our system,” he said, addressing the Senate chair.

With Republicans set to take control of the upper chamber in January, it has raised questions about whether Democrats might seek revenge by blocking Republican initiatives in order to run against a dysfunctional GOP Congress in 2016.

Reid said that would not happen.

“I have been able to strike compromise with my Republican colleagues and I’m ready to do it again. Regardless of how you may interpret last week’s election results, it’s clear the American people want us to join together to get things done for the middle class and all Americans,” he said. ...


So Reid is a punk ass, weak-kneed weasel. We ought to have forecast as much with his tinny little weasel voice you can barely hear when he speaks.

If this is the tone and tenor that we can expect from him come January then it's time for the Dems to replace him with someone with real balls, like Elizabeth Warren. Someone who will give no quarter to the Reepos and expect none. Someone with a spine who is willing to fight for us, and not roll over for the poppets who he refers to as "the American people" - in actual fact, those yahoos that came out in their numbers while Demos slumbered.

As one smirking chimp blogger put it, reacting to the Hill story:

"Harry Reid is up for re-election in 2016, along with 33 of his millionaire buddies. Feel like un-rewarding him? "

Damned straight! This is exactly the problem (money influx from corporations, lobbyists removing the balls of pols) and why we need to weed out useless weeds like Harry Reid, who have outlived their usefulness - to the real citizen, or the nation. If he wants to be a punk or the Reepos' bitch, let him do it on someone else's time and dime.

I don't know how much more clearly I can express myself on this!