Keystone Stopped For Now - But Why Are So Many Dumb Americans For It? 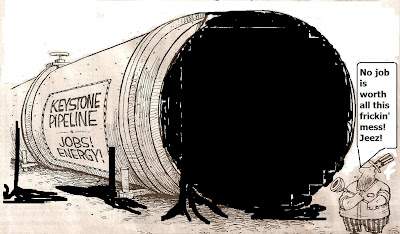 "Every dollar that we spend today in developing and using more fossil fuels, is another dollar spent in digging the graves of our grandchildren. I don't want to dig that grave anymore" - Sen. Tom Harkin, on the Senate floor in debate over the Keystone XL pipeline

As the news was revealed recently  that the Keystone XL pipeline approval fell one vote short, one wonders just how much longer it will be before this Canadian abomination materializes. How many Dems will hold out before turning whore, and how long can Obama sustain a spine and use veto power - especially come January? These are questions that keep me up at night, and should also keep you up too,  given how the approval of this monstrosity would allow likely deposition -via spills- of some of the most polluted effluent as well as sky high CO2 emissions. If you think the emergency snow event in Buffalo has been a disaster, wait until even bigger and more prolonged polar vortices are formed (as a result of global warming), and the icy air encounters warm lakes!

What is even more incredible to me is how the Democrats could have wasted so much precious lame duck time dealing with this issue (all to try to secure the Senate seat of Mary Landrieu - which is hopeless, imho) when they could have instead been approving Loretta Lynch, Obama's choice for Attorney General. Do they really believe her chances will be better when the Reepos have a 54 vote majority? As Rachel Maddow put it, she'd like to know what they're smoking. I would too, since it sounds a lot more powerful than what's on offer her in Colorado.

Back to the Keystone: Another gripe I have is how many Americans have consumed the bullshit that this pipeline will actually provide any benefit. According to current polls, cited on Chris Hayes' 'All In', some 59 percent of Americans (the 'Dumbo' brigade)  approve of the Keystone XL, and only 31% are against it. Which means the majority have swallowed the propaganda hook, line and sinker.

These bozos have no clue, not one,  that virtually no benefits redound to our nation's favor- and the few paltry benefits that do, are grossly exaggerated. The pipeline is essentially Trans Canada's and to be put in using OUR land (which will also be at dire risk for spills) and piped to the Gulf where it will be offloaded to tankers and sold ELSE WHERE - not here in the U.S. Most likely to places like China and India. Hence, the crappola that it "lowers energy costs" and "promotes energy independence" is blatant bull pockey. Only a halfwit or ignoramus would buy that! So, it looks like 59% of 'Muricans are halfwits or ignoramuses.

What about the jobs hype? As reported by Chris Hayes, a State Dept. review showed that nearly all the projected jobs (maximum 42,100 or barely enough to satisfy the needs of a town like Pueblo, CO) nearly all would fill only one position for ONE year. In other words, they'd be gone, as in vamonosed at the end of a year. Big deal, all temp jobs! A grand total of 35 permanent employees would be needed once  the pipeline commences service. This is about half the staff needed for your average mid-level department store. Yeah, the pay will be much better, but the health costs will also be a lot higher - and one wonders if that pay will cover all the pancreatic and liver cancers when they appear.

The hype that costs will go down is also bullshit. A study out of Cornell, cited by Hayes, shows that consumers in the Midwest alone could be paying 10 to 20 cents more per gallon for gasoline and diesel fuel if the Keystone is approved.

Obama last week hit the nail on the head when he stated:

"Understand what this project is. It is providing the ability for Canada to pump their oil and send it through our land, down to the Gulf where it will be sold everywhere else."

So, in non-euphemistic terms, one is led to ask why so many Americans (the 59 % for) are willing to bend over and allow their nation to be so egregiously used.  Do they really want our country to be reduced to being a "bitch" for the Canadians? On the future promise of thirty five permanent jobs? Come on! Seems that they do! I can understand the Repukes' stand on this - but 59 percent of the people? Give me a freaking break! And as Chris noted, the biggest beneficiaries of the pipeline would be the fossil fuel companies who are increasingly spooked by plummeting oil prices. Thus, it's evident the approval of Keystone assures them of a way to jack the costs up again, and when dumbo 'Muricans howl it will be too late.

Idiot John Boehner, of course, has warned Obama not to use his veto against it, which is exactly why he must.

Boehner bloviated in a recent appearance aired on Hayes' show:

Sorry to have to bust your nuts, Johnno, but the American people in favor of it ARE stupid! If they haven't read about the consequences, and don't know enough of who is really benefiting, then why the hell should Obama follow the 'stupid' sector and allow this nutso pipeline to pass?

We the opponents, then, are the ones that need to be listened to, since we know  - based on all the facts available- that it is sheer madness to assume the development of new sources of carbon-intensive tar sands oil. This is when we know we can only burn about one fifth of all the known reserves of existing sources and hope to keep the planet from frying in the runaway greenhouse..

Posted by Copernicus at 6:59 AM