Brittany Maynard Ends Her Life - And Had NO Fear Of Hell 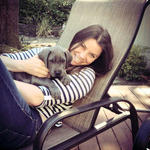 Give all credit to 29 year old Brittany Maynard who terminated her life on November 1st as she planned. Recall she'd moved to Oregon to take advantage of that state's assisted suicide law. Brittany took the lethal dose of drugs her doctor had prescribed and died Saturday night, according to a spokesman. From the account in the LA Times she passed away in her bedroom, "surrounded by loved ones in Portland."

After some hours delay some opined she might have been having "second thoughts" perhaps even about her own "salvation" - but that wasn't even remotely on the table, and in any case the only salvation that truly exists is that which one can provide for oneself. Brittany doubtless understood that so wasn't intimidated by what death might bring. One can only be one's own 'savior' by appropriate choice of action at the moment to die with dignity. Let's be frank that there is no "divinity" out there offering it, or ready to punish if one does not oblige. Humans have to make that decision!

And so, Brittany ended her life the night of the day she'd originally planned, not delayed for a few hours out of any second guessing, but more likely to ensure all the arrangements could be made to ensure her family was at her side when she took the lethal dose. Thus, it was travel times etc. that caused whatever delay may have been perceived by some nabobs,  not out of any worry for the disposition of some "immortal soul" that doesn't exist. For we are, when all is said and done, physical beings with a consciousness that is also physical.

How this can be was explained in a previous blog post two years ago, e.g.

It is a supposition based on the existence of a quantum potential, viz.


for which  a discrete  "phase-locking mechanism"  operates for a localized consciousness. When a physical body dies then, its component B-waves (de Broglie waves) are dispersed and merge into a nonlocal consciousness. There is no individual "soul" here only manifest energy at a sub-quantum level, inherent in what is known as the "Dirac ether".

As I said before (in other blogs) this isn't really positing any kind of recognizable "after life". Indeed, it is impossible to even remotely describe what a nonlocal consciousness might perceive, if it perceives at all. It also leaves a decided negative slant on the question of preserving any sense of self. How can one, if the "self" is no longer separable?

But it is this that Brittany might have to look forward to, as opposed to any kind of "Hell", which of course is nonsense.

No, Brittany wasn't afraid of any boogey Hell or "demons" but of the very real excruciating pain she suffered as her brain tumor progressed. And it was a pain that would become even worse, as she descended into  the next thing to a vegetable. She didn't wish to endure such hellish existence, nor have others exposed to it  - so she chose this way to end her life- and ought not be questioned or criticized for it.

In the end, Brittany made the only authentic choice - one of true ultimate salvation for HER- that each of us will also one day have to make, leaving out any and all phantoms of superstition and supernatural bunkum!
Posted by Copernicus at 10:10 PM