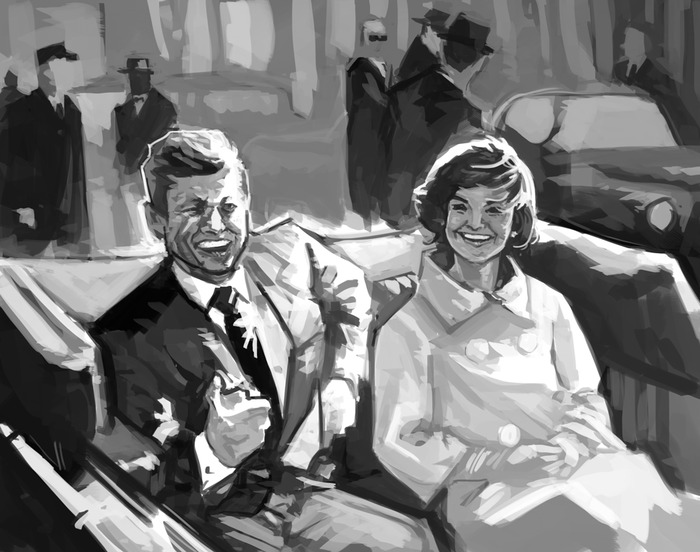 Image from proposed graphic novel seconds before the head shot.

"JFK and the Unspeakable has sold more than 70,000 copies since it was published in 2008. But, judging from recent polls, increasing numbers of Americans are ignorant of the hidden truths behind the assassination. As we move further away from the event, a kind of amnesia seems to be settling into the collective memory of the nation."  - From the Intro Page to the Graphic Novel Adaptation of James Douglas' book, JFK and the Unspeakable .

"Jim Douglass has unraveled the story of President Kennedy’s astonishing and little-known turn toward peace, and the reasons why members of his own government felt he must be eliminated. This disturbing, enlightening, and ultimately inspiring book should be read by all Americans. It has the power to change our lives and to set us free."—MARTIN SHEEN


I read James Douglass' book more than two years ago, but it remains the absolute best book on the assassination to show Americans what happened to Kennedy, why it happened, and how that dreadful event has warped our nation ever since. In this sense, one can argue that this book is perhaps the most essential contribution to recent American history in the last half century. The problem is that despite Douglass'  masterful writing, the deep politics insights may be too formidable a hurdle for many readers, especially the young.

To surmount this impediment, an energized group has now been committed to producing a serialized graphic novel based upon Douglass' book.  Named the "Kickstarter Project" its objective has been described by Hope Hamilton, one of the founders, thusly:

"We are attempting to reach the next generation of peacemakers and truth-­seekers. Here's the Kickstarter page for the project: http://www.kickstarter.com/projects/1450964693/jfk-and-the-unspeakable-the-graphic-adaptation"

The site encourages monetary donations to help fund the project, as well as outlines of what it is about.  The essential summary of the warp and woof of the project is stated below:

"We believe a graphic novel will remind those who have forgotten and inform those who never knew-- dramatizing what Thomas Merton called “the Unspeakable” – the truth that JFK was murdered for becoming a peacemaker.

Using a graphic story-telling approach, we will present many elements of the JFK assassination in a straightforward style that will be easily understood by readers. Our goal is to get the story of JFK’s assassination as a peacemaker to a newer, younger and perhaps more visually inclined audience. Every important conflict President Kennedy had with his own war-making state will be covered here.

The story will dramatize the bold and often secretive diplomatic efforts of JFK to forge peace with world figures, such as Fidel Castro and Nikita Khrushchev.  We’ll watch as Kennedy, in his moving search for peace, traverses a minefield of obstacles and possible acts of sabotage generated from within the State Department, the Pentagon and the CIA. We’ll look with a clear eye at the case against Lee Harvey Oswald, and the evidence that there was cover-up of epic proportions to find him guilty of acting alone. JFK was struggling for the lives of us all and these efforts ultimately cost him his life."


Make no mistake that a graphic novel approach to the Douglass' book is more than needed, and welcome, given it can help spread fundamental historical insights  much wider. Accessing early chapters of the novel is critical in the weeks ahead as the mainstream media is already mounting a massive propaganda effort to re-sell the "Oswald did it" lone nut myth.  Indeed, one of the most mammoth efforts will be Tom Hanks' forthcoming 13-part HBO series based on Vince Bugliosi's book 'Reclaiming History' - a 2,646 page monstrosity since  pared down to 634 pages and renamed: 'Four Days In November: The Assassination of President John F. Kennedy'.


I had already exposed Bugliosi's book for the PR nonsense it is in earlier posts, i.e.
http://brane-space.blogspot.com/2012/05/reclaiming-historyor-redacting-it.html

I also pointedly remarked that all Vince Bugliosi has proven is that his pro-Warren Commission, lone nutter speculations deserve to be remaindered just like his book. I additionally suggested, in an earlier blog, that if Hanks was a genuine truth seeker as opposed to a supporter of patent tripe, he'd have based his series on James Douglass 'JFK and the Unspeakable'. But, of course, Hanks lacked the courage to go that route. It's easier to stick with the "accepted story" and Hanks himself is determined to "de-snooker" (sic) fellow Americans.

Thus, in the wake of such a storm of codswallop, a graphic novel (even serialized) to introduce more readers to the JFK assassination is more than welcome.  The effort is to be published serially, with the target date for the final chapter included in the e-book by Nov. 22 next year (and bear in mind it entails distilling the original 500-page book of Douglass with 1,000 footnotes into a 158 page graphic novel).  In the course of reading the novel, readers will learn about:

-  Gen. Curtis LeMay and others pushing JFK towards attacking Cuba during the Cuban Missile Crisis

-  JFK’s efforts and strategies to make peace with the Soviets, including 21 secret correspondences with Khrushchev

-  JFK’s determined efforts to get U.S. troops out of Vietnam and the forces within his administration that resisted and ultimately prevented this effort

-  Kennedy standing up to U.S. steel interests and the bitterness that this lead to among U.S. business leaders, including Henry Luce, publisher of Fortune

-   The underreported plot to kill JFK in Chicago, stopped and bungled by the Secret Service one month before Kennedy was killed in November of ’63.

-  The latest forensic evidence that shows beyond any reasonable doubt that the published autopsy x-rays are composite fakes.

-  The stories of many witnesses who saw things differently than the official story, who were sometimes killed, died of mysterious causes, or had their stories changed or their lives threatened.


Meanwhile, those who want to learn more should try to read Douglass' original book, available at amazon.com. They can always fill in assorted blanks later after the full graphic novel is published.