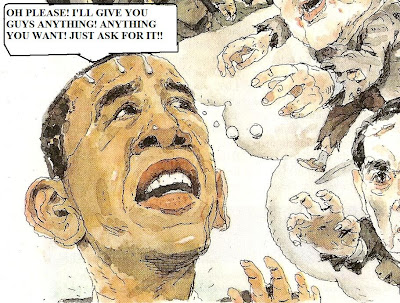 Depiction of Obama from two years ago when he basically allowed the country to be extorted by the Reepo Economic Terrorists. This time he needs to approve the debt ceiling limit increase under Executive order- under the 14th amendment - even if brings on a constitutional crisis. The nation's interest must trump political interests and elections next year!

Incredibly, it appears that - despite strong advice from former Clinton aides- Obama does not have any intention of using the 14th amendment to raise the debt ceiling limit unilaterally, if the Tea Bagger driven Reepos continue their shutdown foolishness into the debt ceiling deadline of October 17th.  This despite the fact that according to a Financial Times article yesterday, the IMF has warned of a "debt catastrophe" if the U.S. doesn't pay its bills.

Let's be clear of the impact if the debt ceiling isn't raised by the due date. First, we may have about two weeks 'grace period' but then on Nov. 1st the Treasury must make a $25 billion payment to Social Security. This cannot be made if the ceiling isn't raised and that means that Social Security payments likely will be seriously delayed or not go out at all. Next, the Treasury must make a bond interest payment (on Treasury securities) of $30 billion by November 15th.  This payment assures creditors that the U.S. claim that bonds are "protected by the full faith and credit of the U.S. government" is honored. If it is not, and it won't be if the money isn't available via debt ceiling being raised, the markets will freak out. That includes the bond markets and the stock market. Two years ago, the latter dropped 17% as a result of GOP terrorism. What will it be like this time? Who knows?

Meanwhile, The Treasury Department has stated in a report:  "A default would be unprecedented and has the potential to be catastrophic. The negative spillovers could reverberate around the world, and there might be a financial crisis and recession that could echo the events of 2008 or worse."

As I noted in a previous blog (last month) The Constitution (Amendment XIV, Section 4),  is clear on the U.S. debt responsibilities:

But according to a UK Guardian article, Obama has no intention of doing so, thereby taking his most potent 'weapon' off the table. According to the Guardian:

" 'Using the 14th would show the Republicans he means business,' one former aide to Bill Clinton told the Guardian last week.

But the White House ruled out the option on Thursday, ending days of Washington debate about whether this obscure legal authority might provide a way out for Obama – at least from one half of Republicans' fiscal pincer movement.

'The administration does not believe the 14th amendment gives power to the president to ignore the debt ceiling,' said spokesman Jay Carney.

'The fact that there is significant controversy around the president's authority to act unilaterally means that it would not be a credible alternative to Congress raising the debt ceiling and would not be taken seriously by the market.' "


But this is nonsense, and Carney's blather doesn't even pass a basic laugh test. Is Carney serious?  First, the President would not be "ignoring the debt ceiling"  - but rather respecting it given that a dysfunctional element in congress has obstructed its being raised!  Second, Carney's excuse that, 'There is significant controversy around the president's authority to act unilaterally'  is codswallop given  this is a prez who regularly (and unilaterally) orders drone strikes on targets from Yemen to Pakistan to Afghanistan - without any "approval" from congress.

While his drone strikes putatively address American security compromised by terrorists, clearly invoking the 14th would address Americans' domestic financial security compromised by the GOP and the incipient threat to the economic stability of the nation. Certainly, if Yemen merits a drone strike owing to incipient terrorist threats, the Repuke congress merits the 14th landing on their asses, given the Constitution clearly states. debts incurred for payment of pensions ....and shall not be questioned

So is Obama not obliged to uphold the Constitution, and in WHATEVER manner is required? I believe he is, given that the refusal to honor the nation's debts is a basis for intervention by an adult - and making specious arguments to avoid taking that responsibility  (to probably avoid political repercussions in the mid-terms next year) does not cut it. Not one bit!

Those who encourage Obama to grow some cojones believe 100% - contrary to Carney's PR blatherskite - that the power to use the 14th does inhere in the Executive if congress forfeits its own responsibilities.  In that case, Obama is obliged as the last adult in gov't to step in and seize the power to use the 14th. So yes, the power to use it  DOES EXIST IF Obama takes it. If he projects authority, and goes on the air to make clear the reasons for this extreme action, he will be as legit as JFK when he faced down U.S. Steel in 1962 and stopped them from raising steel prices.  Many in the corporate world at that time believed he "didn't have the authority to interfere in the markets" - but he did. Because he had balls, and he knew the national interest trumped petty political concerns.

Will Obama have the balls to act, or will he allow the Repuke anarchists and terrorists to get the better of him again? We have to wait and see! In the meantime let's hope there are no further smokescreens giving BS reasons not to act, and more intelligent justifications for doing so. To give the Reeps a shot over the bow and show them the WH isn't going to come to a gunfight with a sling shot this time around.

Posted by Copernicus at 7:11 AM