Why Boehner is a Liar, Weasel, Punk and Traitor 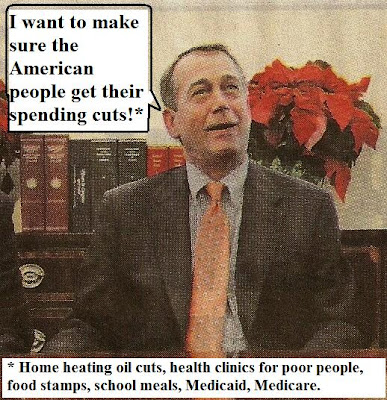 "They wanted to defund Obamacare, and they lost, and they know it. Now, thanks to the fact that they are frightening everyone, they want the prize they've been seeking since the days of Franklin Delano Roosevelt.

For the record: if the Obama administration, in its bottomless desire to Do Something Really Big And Bi-Partisan, actually goes and takes this bait, they should be brought up on three hundred million counts of negligent homicide, because they will have killed the country for all time.-  William Rivers Pitt,  'Boehner, Obama and the Triple Dog Dare', smirkingchimp.com


So this whole freaking shebang shutdown has been all for show, to show the Obama administration, the country and the world that the old South is ascendant again and will call the shots (using 'hostage politics')  whenever the hell it wants. Tea Bagger nation, make no mistake, is the reincarnation of the Confederate traitors in modern form with John Boehner as Chief Enabler.

We now learn, as per the analysis of Chris Hayes last night on MSNBC, the GOP always felt the repeal or defunding of 'Obamacare' wasn't feasible and what they wanted all along was a ransom to extract "entitlement" cuts without having to raise taxes. Who'da thought? Well, we should have realized it was all an act.

As per a recent article in TIME ('Loss Leaders'. p. 24) Boehner never believed that challenging Obamacare (the Affordable Care Act) was a viable option since two days after Obama's re-election. According to the article:

"Two days after Obama's victory, Boehner was asked whether Republicans would continue to pursue a repeal of health care reform.

'I think the election changes that', he said, 'Obamacare is the law of the land'.

He flatly rejected the idea of tying funding for the bill to the larger fiscal battle.

'Trying to put Obamacare on a budget resolution risks shutting down the government."

So why in the hell did Weepy Johnno turn around and do just that? As TIME notes it was because his Tea Party Caucus wanted nothing less than Obamacare defunded. Since all those reprobates are invincible in their districts - never having to worry about being 'primaried' on the Right, so long as they adhere to the Teapee line-  it didn't matter to them. It did to the weasel punk  Boehner, who stood to lose his Speakership if he refused to cooperate. So despite his earlier refusal to put the ACA on a budget resolution, the little traitor did just that:  placing his Speakership above the national welfare, to appease his proto-Confederate minions.

Hence, pushed by his whiny punk zealot TPs, here we stand at the precipice of a possible credit default. And a never before event: The nation failing to honor its bond responsibilities for the first time in American history.  Is this "harsh language"? You're damned straight because harsh language to call these cretins out is what's required. Being "civil" is exactly what they don't grasp, and what they interpret as weakness. This is a point Obama needs to comprehend as I noted yesterday.

But lo and behold the demands have now changed. No longer does the GOP- at least its saner elements-  demand defunding Obamacare, , but  rather the full scale slicing and dicing of Social Security and Medicare - with no tax strings attached. Only then will they allow the debt ceiling to be raised and national economic catastrophe to be averted.

Of course, Obama can't give in to this new variant of extortion any more than the old. As blogger William Rivers Pitt has aptly put it ('Boehner, Obama and the Triple Dog Dare', www.smirkingchimp.com):

"President Obama's most significant achievement, his legacy for all time, will be facing down these cretins, holding the line against any and all concessions on elemental pieces of legislation like the budget and the debt limit, and ending the vile and vicious cycle of hostage politics that has done so much damage already.


To which I totally agree. For Obama to even remotely consider doing a "grand bargain" that includes cutting Social Security and Medicare to allow even a temporary increase in the debt ceiling would be an abomination to tarnish his legacy permanently.