Does Obama Understand That He's in a WAR, Not Leading a College Debate Team?

"It does seem like this group of really hardcore Tea Party types may not really be impressed (by a stock crash). They seem to believe that the cause of justice is on their side, and that they are making some sort of glorious last stand or avenging the surrender of the South in 1865 or something. They may not listen."
- Doug Henwood interviewed in salon.com piece, 'Tea Party's Shutdown Lunacy: Avenging the Surrender of the South'

On the line is the full faith and credit of the U.S. government, and the restriction of payments such as to Social Security ($25b due on Nov. 1st) and for Medicare providers, as well as disability for vets. Already, death benefits have ceased. Meanwhile, the nation’s largest creditors, China and Japan (to the tune of over $2.14 trillion) have warned of the consequences of a default, or failure to raise the debt ceiling. Meanwhile, asshole Tea Baggers compare the ACA to the “Fugitive Slave Act” of 1850 and some of these nincompoops even profess that a default won’t be any biggie!

How much more of this bullshit is Obama going to take? How long will he yap with these Teabag Confederates before he understands they are just game- playing him? Already, a new AP poll shows his approval rating is in the tank, at 37 percent, barely 2 points above Bush Junior’s before the 9/11 maneuver to jack it back up .

But all I hear is rhetoric and blather. Why is it the man refuses to boldly act as a leader against these traitors? By that I mean doing one of two things: 1) minting a trillion dollar platinum coin and depositing it in the Treasury, de facto raising the debt limit in one fell swoop on his own, OR 2) invoking Section 4 of the XIV Amendment via Executive Order to do the same. Obviously, neither can be termed 'prosaic', but letting us become a deadbeat nation and allowing a stock market crash, not to mention credit default ….merits extraordinary action…..to my way of thinking. Which is preferable under the circumstances: a constitutional crisis (acknowledging the Civil War is active once more), or a worldwide recession? I will take the former any day of the week, twice on Sunday!

As the great former Barbadian Prime Minister J.M.G.M. 'Tom' Adams once noted, after one of his several constitutional debates in 1972:

“When ordinary means are insufficient to change those who would seek to undermine our polity, then the true leader must use extraordinary means to re-establish it.”

Is Obama a true leader, like John Michael Geoffrey Manningham ‘Tom” Adams? (Who used fiery street oratory as he traveled round the Barbadian nation to mobilize public opinion against a plan to change the Barbadian Constitution). I don’t know, but so far the indications are he is not. He fears conflict and “unintended consequences” which is exactly what a real leader must not fear. And despite avoiding what he might assess as “precipitate actions” (in minting a $1T coin, or invoking the 14th) his approval polls keep falling like a lead weight.

Nor does he see his opposition for what they really are: rabid, proto-Confederate rebels who’d rather trash the nation than see his signature law gain traction. Instead, he continues to labor under the delusion that he’s dealing with reasonable and rational men. Hence, the endless rounds of confabs …never amounting to squat. It almost makes one believe the narrative that Obama is a consummate campaigner but a leader…..not so much.

As a recent salon.com article already pointedly noted, this standoff on the debt isn’t about fiscal issues or debt at all, it’s about the Old South (via the old Confederacy) attempting to “avenge the surrender of the South”. See e.g.

In an earlier, similar piece on the Tea Party's Southern heritage it was observed that the Civil War never really ended. A "truce" or armistice was merely signed, similar to the one halting the Korean War. What we now see, is the Civil War re-activated via the Tea Party's government shutdown and soon enough, refusing to raise the debt limit.

In their terrific book, Banana Republicans, Sheldon Rampton and John Stauber observed that the reason Republicans usually emerge victorious in political battles is because they treat them as "warfare", while Dems typically treat them as "college debate society meets". Hence, adopting a milder modus operandi etc. they consistently get their asses beat. It's time for this shit to cease, especially now with our financial future at risk.

The sooner Obama grasps the dynamic here, the sooner he will also grasp that talking with unreasonable, ideological puppets is useless, so is rhetoric via presidential speechifying. The time for timidity is over. Either mint that damn coin, sir, or invoke the 14th. Don’t dismiss them if you don’t want the nation taken to perdition by these latter day Johnny Rebs! ACT!

“Yesterday, the Republicans were using the Affordable Care Act as the reason why they had to shut down the government and not pay our bills. Today, it’s ‘reforming’ Social Security, Medicare and Medicaid. What will it be tomorrow?

“Social Security, which is independently funded through the payroll tax, has nothing to do with the deficit.  The deficit -- which has been cut in half since 2009 -- was significantly caused by the Bush wars in Iraq and Afghanistan, the Bush tax cuts for the wealthy and the Wall Street-induced recession, which led to a significant decline in federal revenue.

“The Republican Party and Paul Ryan cannot be allowed to get their way by threatening the American people with a continued government shutdown and a default unless Congress cuts Social Security, Medicare and Medicaid.  That is not what the American people want.  Rather, we should be passing legislation which rebuilds our infrastructure and creates millions of new jobs, address the crisis of low wage employment by raising the minimum wage, make college affordable and fight for equal pay for equal work."

Below is a recent interview that Bernie did on CNN with Wolf Blitzer which discusses these issues. 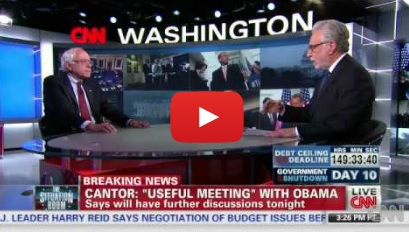 Posted by Copernicus at 1:50 PM