Obviously, NO Real Atheist Can Be A Republican....OR A Libertarian! 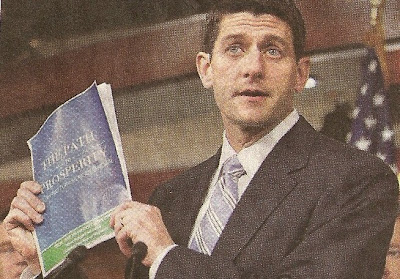 Paul Ryan, Libertarian Randite with his Ryan Budget - he still hopes he can fob off on us in a "grand bargain". No atheist ought to have anything to do with this character or his ridiculous philosophy.

hits the nail on the head - given the Reepos are all about pushing heavy religion on its denizens, and using that as a hammer to also halt abortion, contraception, gay marriage and even state assistance to the poor ("If the poor had faith, then they wouldn't need welfare.") But the piece also nails the Libertarian crap, i.e. when stating:

"Atheists are secularists, and a secularist cannot be a member of today’s Republican Party. You’re either one or the other. You cannot be both. Now, I am acutely aware that a great number of atheists identify with the libertarian wing of the Republican Party, but this is comical. A lack of evidence is why atheists don’t believe in God. But to believe in libertarianism is in itself an act of faith, because libertarianism has not only never been tried anywhere, but an overwhelming number of economists reject the philosophy as little more than “capitalism with the gloves off” — a condition that would only exacerbate the winner-takes-all society we have today."

I can't dispute  this take which is why I have no truck or tolerance for Libertarian atheists, and dismiss Republican atheists like S.E. Cupp as essentially fakes. To me they're an anomaly like a two -headed,  walking carp.  Most Libbie atheists probably were drawn into their version of atheism by virtue of noting Ayn Rand's famous quote in her book, The Virtue Of Selfishness', p. 38:

"Faith is a malignancy that no system can tolerate with impunity, and the man who succumbs to it, will call on it in precisely those issues where he needs reason the most. "

But this is a minuscule support on which to build a coherent, "grown up" atheism.  The same salon.com article also notes that hyper-militant zealous atheists are equally immature, and give atheists a bad name to boot. A particular brand of these includes the likes of Sam Harris, and the late Chris Hitchens who pounded an incessant anti-Muslim theme in assorted writings.  As the salon.com piece observes, again accurately (and this was a topic brought up on Bill Maher's Real Time Friday night)the problem with these anti-Muslim zealot atheists is:

"rhetoric that not only ignores our long history of foreign policy blunders in the Middle East, but also echoes the neo-conservatives, the Israel lobby and the entire right-wing echo chamber"

Which was the exact same point guest Michael Moore was trying to make to Bill Maher, who echoed many of the anti-Muslim lines. Moore tracked our history in actually recruiting Bin Laden to our own ends - to make him our special "puppet" - to attack the Soviets in Afghanistan, as well as setting Saddam up as a separate puppet, to use against Iran. Oh, also toppling Iran's original President Mossadegh in 1953. Is it any wonder so many Muslims hate our guts? If you were pissed over at every turn, by a meddling nation full of hubris, wouldn't you not be exactly pleased? But this is the point the anti-Islamics miss.  Those who wish to see former security specialist Chalmers Johnson's take on it, can go here: http://brane-space.blogspot.com/2013/09/have-americans-especially-thier.html

Where he supplies answers regarding 'blowback' and why too many Americans are totally in the dark. Maher and the anti-Muslim atheists ought to read that, as well as Johnson's book, "Blowback".

In his brilliant article Atheism Wars[1], the eminent economist John Gray, author of False Dawn- The Delusions of Global Capitalism,   argues that “evangelical atheism has so aligned itself with illiberal economic values that it’s joined forces  with the Christian fundamentalists in the Republican Tea Party.”

If this is so, why on Earth would I wish to make common cause, especially as I’m a 1960s-style Kennedy liberal who hasn’t moved one iota toward any specious “center”, especially since Kennedy’s murder at the plausible hands of a rightist-based conspiracy? Such affiliation, despite the much ballyhooed meme of “atheist diversity” is an insult to me.  Indeed as Gray notes, it would no more occur to Richard Dawkins that an atheist would reject liberal values than that he or she would take up witchcraft. But the unsettling fact is too many do!

As the 2012 political campaign revealed, the GOP budgetary doyen Paul Ryan (an ardent acolyte of ’s) basically sought to adopt her views in his Ryan Budget. This would have replaced standard Medicare with vouchers with which the elderly would seek their own medical assistance each year, as opposed to depending on a government secured co-payment. I can just imagine how I’d have fared in my HDR prostate cancer treatment last year if Ryan’s vouchers were the extent of  assistance available! With a $10,000 per year voucher allocation, I’d have ended up in major debt. Five figure debt!

So pardon me if I regard any self-proclaimed atheist who embraces the Ryan budget or his  minimal government (except for defense) politics as stupid, delusional or both.

Beyond this, according to Nobel Prize-winning economist Joseph Stiglitz[2], “the upper 1 percent of Americans are now taking in nearly a quarter of the nation’s income every year and control 40 percent of the nation’s total wealth”. Conversely, the bottom 80 percent of Americans own just 7 percent of the nation’s wealth. Stiglitz notes that “while the top 1 percent have seen their incomes rise 18 percent over the past decade, those in the middle have actually seen their incomes fall”[3]. By any measure this economic inequality is a corrosive, long term evil, given it reduces people’s choices and indeed can incept criminal acts for economic self-preservation.


This dovetails with the salon.com quote of Walter Bristol, an atheist interfaith activist, who wrote,

“Economic inequality is one of the most imminent issues facing Western society today. Any progressive movement that chooses to dismiss it is and will be rightfully dismissed themselves.”

Ouch! Any atheists paying attention? They had better be! Atheism in this view, and one shared by me in my new book, cannot be some mere abstract philosophizing position but must be in common cause with larger social justice movements  - and that by its nature- also excludes aligning with Reepos and Libertarians in economic policy issues. (Though one can strategically align with them when it comes to opposing NSA spying overreach - a subtle point Melissa Harris Perry was seemingly lost on in her show this morning.)
Since I am also foursquare opposed to laissez-faire capitalism and especially the Neoliberal variety that worships the global free market, there is really nothing I have in common with the new breed of pro-free market atheists.  We could as well be from different planets.  Reading John Gray’s excellent essay  showed me that my position is genuinely more implicit atheism, or what George Smith (The Case Against God, p. 9 ) described as agnostic atheism, than the more hard-edged variety of Ayn Rand, or Madalyn Murray-O’Hair. In Smith’s words:
The agnostic atheist maintains any supernatural realm is inherently unknowable by the human mind. And further - not only is the nature of any supernatural being unknowable, but the existence of any supernatural being is unknowable as well
After all, if one cannot truly know anything supernatural, then how can one arrive at a supernaturally –based morality? It is preposterous. One then must work very hard to fashion a natural ethics, which features test markers and attributes based in the natural world. This, of course, is the heart of my Materialist ethics!
The problem is that a libertarian atheist’s ethics aren’t likely to agree with mine, any more than his definition of Materialism will agree with my own. I had warned about this division of interests and ethics in my first book (The Atheist's Handbook to Modern Materialism).    As for S.E. Cupp, I don’t regard her as any bona fide atheist at all, but rather someone who’s been able to parlay a purely nominal atheism into becoming a high profile media person. She basically found her special media niche by being the ultimate conservative, religion-friendly atheist! As Ian Murphy so aptly describes her shtick, in an Aug 4, 2012 salon.com essay:
"Cupp’s self-loathing-token-atheist-in-the-conservative-media routine seems so geared toward delegitimizing atheism, and selling books to fundie Fox types, that is strains credulity"
She’s also disqualified from being an atheist I’d ever associate with by her comment, "I would never vote for an atheist, ever."
Murphy once more: "In an atheist integrity contest, she loses to Stalin by a mustache."
Is it possible the aggressive memes of dogmatic religions have called forth equally aggressive memes of non-belief to combat it? This is possible, but sadly hasn’t helped atheists win the battle for hearts and minds. In the meantime, atheists need to develop a more cogent, political dynamic that embraces the social justice aspect rather than ignores it.  To quote the salon.com article again:
"It’s time for the atheist movement to get off the political sidelines. It’s time to truly help this country become a better place to live for all its citizens"

Posted by Copernicus at 9:05 AM