YES! The Tea Baggers Are Nuts Enough to Crash The Government! 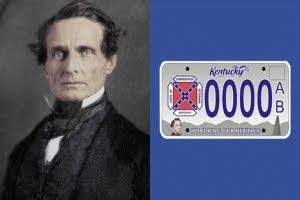 Rebel traitor Jefferson Davis, whose visage still appears on many Southern license plates, must be smiling from his grave at how his neo-Confederate ideological descendants have brought the government to the precipice and will now likely toss it over the cliff.

"If you listen to right-wing radio, watch FOX News and read their online media and take it seriously (because they do) then you would know that many on the right don’t want to live in a country that has Social Security, Medicare, Obamacare, the minimum wage, Food Stamps, immigration, public schools, infant nutrition programs and the rest of the things government does to make our lives better. And they don’t want anyone else to live in a country that has those things, either."-  Dave Johnson, 'Misunderestimating Who They Are', smirkingchimp.com


Okay, I admit I was wrong. Way wrong! In my fulsome over optimism (which only occurs a few times a century) I had actually predicted the government shutdown would end after a week and never ever bleed into the debt ceiling deadline. I had somehow expected rationality to eventually prevail so we wouldn't have reached this point. But, alas, I'd underestimated the supreme idiocy and insanity of the Tea Bagger neo-Confederate band of loons holding this country hostage. Many of whom, let's be clear, don't even think a default matters or will have consequences. Thanks to these assholes, all of us will experience real consequences!


Ol' Jeff Davis must be smiling from his grave, to see his ideological and other economic descendants (in the Tea Party especially) are on the verge of crashing the federal government into what many financial analysts have called "Armageddon" if the debt ceiling isn't raised by midnight tonight.

Already credit rating service Fitch has put the U.S. on a watch list for credit downgrade, below its current AAA bond rating. If that happens, and if no solution is reached by midnight, then we are headed to default. The U.S. Treasury will be able to borrow no more money, and risks not being able to pay Social Security, Military Vets benefits, or bond interest. In this case, which could transpire by Oct. 31- Nov. 1 (as Steve Rattner noted on Chris Hayes' All In on Monday) then people will see pain across the board. Start with your student loans, home loans and car loans all going up. As Rattner noted, every 1% increase in interest means $20b not available for purchase of goods and services. One financial analyst firm already estimates the shutdown has cost this fragile economy $22b.

Meanwhile, this morning, John Chambers -   Chair of the Sovereign Ratings Committee at Standard and Poor's -  has noted that each week of shutdown has cut 0.3% of GDP from the 4th quarter output This alone is parlous, given the GDP in any given year remains unbelievably low at 2-2.2%.  Chambers noted that if we go past the point the government can't borrow any more, "one of two things can happen": 1) You'd have to cut government spending (other than debt service) by over a quarter of gov't spending, which would put the economy in recession, OR  2) refuse to pay bond interest coming due  -leading to absolute default. In this case, the outcome would be "much worse than Lehman in 2008". For those who don't recall, Lehman paved the way for the massive stock market crash (and credit meltdown) that year,  with most 401ks losing up to 40% of their value - from which many ordinary citizens have just started to emerge.

Chambers also dispelled a long standing myth among the ignorant Tea Bagger crowd, i.e. that the debt ceiling being raised allows spending.  In fact, as Chambers pointed out, "the spending has already been approved as per acts of congress, but now elected officials are balking at funding that spending."

And let's get it straight WHO these assholes are: they are entirely the Tea Bagger nutsos who have threatened Goopr  weak sister John Boehner with his Speakership unless he conforms to their idiotic, insane agenda - defunding the Affordable Care Act.  This is why Boehner, wussie that he is, turned down the reasonable bipartisan solution worked out in the Senate yesterday- which was really the last best chance to conclude a deal.  That deal would have re-opened the government at least until January, and raised the debt ceiling without any major strings attached, until February. So anyone prepared to blame the inability to go to military monuments (including Vietnam War Memorial) in D.C. on Dems or Obama needs to get their heads on straight about who the real culprits are here. (Oh, and stop watching FAUX News!)


Because as soon as the rational re-opening solution was sent to the House, Boehner's rebellious crew warned him it was a no -go. No way would they vote for it, because "it didn't go far enough". Now note- this was after GOP Senate stalwarts like Mitch McConnell, had already backed it. So WHO are the crazy whackjobs here? WHO are the ones responsible for this bullshit? They comprise a kernel of about 44 -odd,  recycled proto-Jeff Davis backers in the House - about 1/30 of the whole gov't holding the rest hostage.

Chris Hayes had a feature segment on 'Who Is Shutting the Government Down?'

At the top of the list, Rep. Paul Broun of Georgia's 10th district, about whom Chris played several clips, including showing this asshole stating:

- The South was victimized by "Yankee Aggression" in the Civil War

- Climate change is the "biggest hoax of the century"

- " Evolution, the Big Bang Theory and Embryology are ALL lies from the Pit of Hell".

Get this, this delusional psychotic jackass sits on the House Committee on Science, Space and Technology! You want to know why your government is shut down, look no further than under -educated Tea Party pawns  like this. Though he claims to have an "M.D." degree, it could only have been awarded by Smokehouse Online Bible College since he professes the Bible governs and dictates science. And no real scientist would ever make a statement (following his fulminations against evolution, etc.)  like:  "It's these lies that try to keep me and all the folks who are taught from understanding that they need a savior".

Again, HOW the fuck can this fool be a member of any Science and Technology committee? Shit, how the hell could he even be a member of congress? The only explanation is half wit goobers in his district no more educated or informed than he is, electing his sorry ass!  And it is because of 44 such districts across these United States (mostly in the South), with hundreds of thousands of such halfwits (many pining for the glorious days of Jeff Davis and his lot) that we have 44 Tea Bagger traitors in the House ready to turn this country upside down to try and get their way. Are we now into appointing blithering imbeciles? Well,  figure it out for yourself when you next consider another Tea Pea moron backing the shutdown and default: Doug Lamborn.

Lamborn hails from El Paso County, Colorado, where he's been re-elected by the goober hyper military nuts ensconced here. Though these goobers piss and moan about "welfare" (Medicaid) for a pregnant mom working at Walmart unable to make ends meet from a piddling wage, they are quite happy to snatch military welfare benefits.  This includes defense contractor benefits such as Lamborn has proposed to construct a $1 billion 'combat air brigade" here in the Springs, defended as "necessary for training support in Afghanistan" - despite the fact the U.S. is supposed to be leaving next year.

In other words, $1 b down the drain, and that's not even figuring in the tens of millions wasted each year in fuel costs with 122 choppers flying hither, thither and yon.

Lamborn has also gone on record to defund any health care act, especially the ACA, which allows birth control. He also is against contraception, period, and demands a "personhood" amendment to "protect the unborn citizen".  Thus, he advocates passage of a new personhood amendment currently on offer, which penalizes any pregnant woman with up to 5 years behind bars if she is caught riding on a motorcycle, skiing, or drinking alcohol - which would be "voluntary manslaughter of the unborn citizen."

Now you know the basic psychological profile of the Tea Bagger assholes shutting the government down, and holding a gun to our collective heads as we near the 11th hour. Don't fucking blame Obama for any of this! He's finally standing his god damned ground as he should have the first time these fucks tried to extort concessions in 2011. Blame the Jefferson Davis, neo-Confederate dickheads who are hell bent to avenge the South's surrender to "Yankee aggression",  by taking down the current federal gov't led by the first African-American President.

To read more about the issue under discussion, see: