Enjoying the End of a Mild Winter? Get Set for Summer HELL! 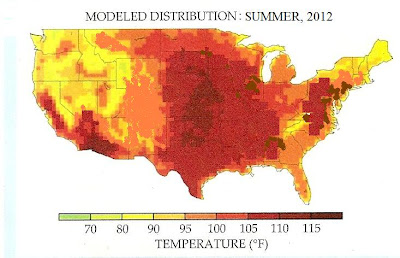 There will be even more climatic catastrophes in 2012, and we've already seen this partially fulfilled in the sheer number of devastating tornadoes spawned since January. Meanwhile, though many people (especially the irritating weather folk) praise the "beautiful" weather, and temperatures 25-35 degrees higher than normal - most thinking people understand this is as welcome or normal as a two-headed baby. Do you see people awwwwing and oooohhing over those? Hardly! Because they're understood to be an abnormality, disjoint from the natural or biological order.

At least it's good to see some of the meteorologists, like Sam Champion on ABC- highlighting the downsides including: much earlier and more intense pollen distribution (a charming welcome for allergy sufferers) and an increase in the insect population, especially ants, ticks and mosquitoes. This also means new waves of mosquito borne illness will likely follow including from West Nile virus and likely (now) dengue fever.

The latter is especially bad, since one becomes so susceptible after the 2nd bout of the disease that the 3rd time is usually not a charm but death. They call it "dengue hemorraghic fever" in the West Indies, because you bleed profusely from every orifice. In the W. Indies the fatality rate is usually 65% or more. The announcement of some 19 cases of dengue in Jacksonville, FL last year was therefore worrisome news, since at that far north it means an inevitable spread - likely to the Gulf states and maybe even all the way to Texas.

Apart from this, Vermont has seen much of its maple syrup crop degraded on account of the sap rising prematurely from the early high temperatures. One of the main consequences, according to long time tappers, is that the sugar content is down by 70%. Not much point in bringing this batch to market because consumers expect maple syrup to be sweet. Meanwhile, other food crops are at risk from a too early ripening.

Strangely, many who relish and embrace the freakishly warm weather in winter are failing to process that if it's 85 in St. Louis or Cedar Falls, or Minneapolis now, it will have to be like bloody hell in late spring or the summer. You're not going to typically enjoy 80s now and then 80s going into May, June, July and August.

A plausible model for the summer - starting from about Memorial Day all the way through Labor Day weekend - is depicted in the map graphic shown. The temperature distributions indicated are highs for those geographical areas that I worked out based on the 2008 Nature paper written by Dr. Noel Keenlyside et al, and specfically their future projections graph, labelled 'A1B'. Recall this was the same paper that skeptics tried to use to claim that warming has "stopped since 1998" - but as I showed in numerous prior blogs, they misinterpreted the statistics. (I.e. each point in the primary 'Hindsight/foresight decadal variations figure represents a ten-year centered mean. That is, each point represents the average temperature of the decade starting 5 years before that point and ending 5 years after that point. Thus, the statistics for potential “cooling” could not possibly have been justifiably extrapolated beyond 1998 + 5 = 2003.)

Making a long story short, the future projections graph A1B disclosed rampant heating beyond 2010, with the Hadley Center UK prognostication line linking up with those from the IPCC and Keenlyside et al. And that's exactly what we've seen - with 2010 the hottest year on record since records were kept, and last year featuring more than 3,800 heat records broken in hundreds of cities and towns across the U.S., with more than 750 records for night time high temperatures broken in Texas and Oklahoma alone.

So, to compile my map distributions I used a program I devised for my Mathcad 14 software, and input data from the past two years to project what can be expected (guided by the A1B graph projections of Keenlyside et al). Even so, it's likely the map shown doesn't tell the whole dreadful story. For one thing, it doesn't indicate how long those blistering temperatures will endure in the regions indicated. But my best guess is that they will last longer than they did last year- when both Texas and Oklahoma endured not weeks, but months of temperatures over 90 degrees, with night time temperatures barely edging into the low 80s. This time around the northeast and east as well as midwest will feel the punch too, and I am predicting a lengthy heat wave for Chicago that may well rival the one some years ago.

This, of course, is all the obverse side to the "wonderful weather" you hear people bragging on now. They fail to understand that this "wonderful" weather comes at a horrific cost. And what you saved in heating bills you're essentially going to give back (with interest) in air conditioning costs. And believe me, you will need it - and that's assuming our twitchy power grids don't come down from the increased demand.

The paradox of global warming, and especially the runaway greenhouse scenario when considered in conjunction with Peak Oil, is that just as temperatures will be ramping up to frightfully high levels - requiring enormous use of a/c- the energy costs will be soaring because of dwindling supply. This means that inevitably multiplied social and environmental costs will emerge. Most likely these will come from trying to stretch the grid beyond capacity, or feverishly accelerating oil shale and natural gas extraction via fracking.

Just bear in mind that the balmy winter you're cooing over now, with temperatures near 80, will likely convert to an insiduous hell of endless days topping 115F or higher (with humidity factored in) - this summer. Don't say you weren't warned!
Posted by Copernicus at 10:25 AM