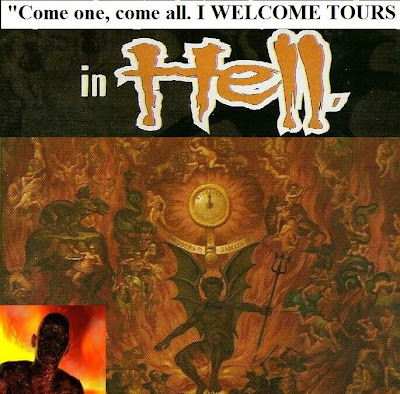 It is well known that capitalism in its most amped up version in the US of A, aims to deliver to every imaginable service or product desired within the law. Thus, it really ought not surprise us that assorted "entrepeneurs" will come up with services or products that are downright outrageous - including the recent efforts to auction off the paraphernalia of serial killers, as well as "products" which defy imagination and common sense .....such as "porker porno" in which sweating 300- pounders are featured engaging each other like over-sized, snorting rhinos on giant mattresses. Of course, other execrable products precede these, such as the fake vomit used by pranksters, fake dog poop with odor simulators to place on an unwary office worker's desk and "poop cushions" to place on sofas and simulate human flatulence.

But now a new low appears to have arrived in the guise of guided tours (3 per day) over serial killer Jeffrey Dahmer's former haunts, in which he picked up dozens of innocent victims before luring them to his apartment, butchering them and eating them. See, e.g.

The saga of Jeffrey Dahmer, make no mistake, is one of the most appalling in the history of Milwaukee (writing as a former resident, also born there). Dahmer redefines what a human beast is, as he not only drugged his hapless victims, but butchered them after sexual congress, then ate selected body parts and often stored the heads in his fridge.

Hence, any revisiting is cause for alarm (never mind the idiots that carp "History is history and we need to own it!" -- sorry, nope!) and indeed has caused a firestorm of outrage in the city, e.g.

The tour begins at Milwaukee's former Club 219 and costs $30 for the one mile walk along with the description of which victims were picked up where, started yesterday on Milwaukee's South 2nd Street. According to Amanda Morden of BAM Marketing and Media:

"We are actually looking at different areas on the tour, where he has actually picked up seven of his 17 victims"

Even as tickets on Groupon already sold out, the doctor who examined Dahmer and testified at his trial says the tour is "in poor taste," and "could cause post-traumatic stress for the victims' families".

According to one news item:

"Dahmer Tours hasn't reached out to any of the victims' families.They say they're responding to the curiosity that's already out there."

But of course this is the byword and motto of "anything goes" capitalism! Thus, the manufacturers of artificial dog poop and human vomit are "simply responding to the existing demand and curiosity" for such, even as the sick makers of "porker porno" are only meeting that demand. Well, how about not feeding such demands or curiosity in the first place! Must every skewed, sick desire be met by some capitalist service or product? If another city, say Chicago, expresses an interest in conducting "John Wayne Gacy" tours will another marketing outfit take up that banner - complete with a Gacy imitator dressed as a clown and luring young victims to his rat-infested redoubt?

Give me an effing break!

The truth is that we are seeing manifest what author John Kenneth Galbreath noted in his terrific 1955 book, The Affluent Society, that the entrenched capitalist system has now gone beyond delivering to needs, but is catering to and even feeding an unending vortex of "wants"!

This can't be healthy for any society, and as Buddhism teaches, the only way for the human to possibly approach any kind of happiness in this world is to try to reduce all wants to zero. Every want left festering as well as instantly gratified leads to an even more dire and perverse want which will ultimately acquire a life of its own. The person harboring such wants then becomes a slave to them and is entangled and manacled as his capitalist providers seek to satiate them.

What will be next after these Dahmer tours? Will sick people demand "tours of Hell" after being hooked up to an auto-suicide device such as devised by Jack Kevorkian? One is left to wonder!
Posted by Copernicus at 11:00 AM