The Trayvon Martin Case and the Dogs of American-Style War 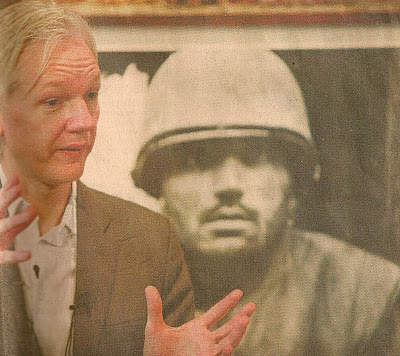 Julian Assange defends Wikileaks release of documents two years ago, mainly to do with the conduct of the occupation of Afghanistan. It is doubtful that such releases can have any substantive effect on war policy or conduct until the documents NSC 10/2 and NSC-68 (which green light never ending wars and meddling) are each mothballed!

"And Caesar's spirit, raging for revenge, with Ate by his side come hot from hell, shall in these confines with a monarch's voice, Cry "Havoc!" and let slip the dogs of war, that this foul deed shall smell above the earth. " (Julius Caesar Act 3, scene 1, 270–275

"The hallmark of a great civilization is its ability to wage peace, not war."

Incredibly, throughout the media blitz on the Trayvon Martin killiing, none of the pundits commenting have brought up the obvious parallels to the mode of American, pre-emptive warfare since 2003. To summarize briefly: the very least we know (before Sanford police PR began insinuating itself) is that "Neighborhood Watch" guy George Zimmerman encountered Trayvon Martin - a young black kid in a hoodie, and suddenly felt his life threatened. We don't know how many more details there are, but based on 911 calls this is the least we know. The claims that Trayvon "attacked" Zimmerman are still under investigation and as yet no hard proof has emerged to sustain them.

The point is, prior to Zimmerman's overt action of firing his weapon, the State of Florida already had in place a reckless law known as "Stand your ground" - which basically conferred the right of ultimate self protection if one felt or sensed that his life was threatened. On this basis, one can argue that Zimmerman acted "pre-emptively" to neutralize a vague threat that had become entrenched in his sense perceptions - triggering the fear circuits in his amygdala.

Now, think of laws like this all over the nation (we also have one in Colo. called "Make my Day" after the famous catch phrase in the first 'Dirty Harry' flick - where you can shoot and kill anyone entering or already inside your home if you believe he poses a threat to your life) and the inevitable results. We'd had mass bedlam and anarchy! The rule of law as it should be would be incessantly trumped by the perception of a "threat" requiring lethal force. Or "pre-emptive lethal force" if you will.

But as odious as such laws are in terms of the lethal license they give to the feeling threatened, let us admit and concede that they have precedents on the national level! I am talking of course of the "Bush doctrine" and its prescription to justify any form of "pre-emptive war" if the U.S. feels itself threatened. (Note: the Pentagon's PR mongers like to use the term "preventive war" but I am not buying into that bollocks. This again is a form of collaterial language designed to gut critical thought, reason. Please see the book: Collateral Language: A Users’ Guide to America’s New War (2002) )

Referring back to the preceding parenthetical, the alteration of the language (including use of the term "terrorist" and "war on terror") was crucial in order for the Bushies to launch their assorted 'dog and pony' shows (including with Colin Polwell at the UN) to try to show Saddam was getting ready to have a nuke and then who knew? Maybe mushroom clouds! The impetus was then to try to drive American public opinion into embracing an absurd, unjustified invasion and occupation which ultimately transmuted into an 8 ½ year long "war" (which was obviously still an occupation).

In other words, like George Zimmerman confronted with the "threatening" (in Zimmerman's mind) hoodie-clad, tall black kid, the Bushies were confronted with a lone nation (Iraq) they perceived (in their minds) as a "terrorist" (or part of the "Axis of Evil") which had all kinds of weapons and therefore this demanded a first strike. In other words, pre-emptive action, hence striking an initial lethal blow at a country before it could strike- thereby sending its economy into carnage and slaughtering over 600,000 Iraqis according to World Health Organization estimates. (Which are, of course, lowballed by the Pentagon to no more than 100,000).

Needless to say, based on what transpired from the fall of 2002 to March 15, 2003 (public support for the war went from barely 34% in December, 2002, to more than 67% in February) it is incumbent on all Americans now to be aware that when they passively comply with collateral language pushed on them like crack (as it was by the corporate media in the runup to the Iraq invasion) they become no better than useful idiots for the military-industrial complex and perpetual war state.

If Americans instead persist in a state of false consciousness and allow their brains to be PR-dumbed down, then they assist in mutating language and thought toward an ideological agenda, rather than shedding light on the issues themselves.

Nevertheless, the PR residue from 2002-03 which fueled that Iraq invasion bubble of unreality via jingoistic illusions (and inadequate security delusions) continues today with assorted similar pressures to strike Iran - despite the fact there's absolutely no hard evidence they have any nukes, see e.g.

Thus, unlike with the drumbeating in 2002-03, Americans must now do all in their power to resist the flood of media sound bites, from every yammering pundit, assuming ab initio an attack or war on Iran is morally justified, correct and "preventive" (instead of pre-emptive). Let's also reiterate once more, such pre-emptive attacks, as in the case of the U.S. invasion and attack on Iraq, and Nazi Germany's pre-emptive attacks on the Sudentenland in 1938, and Poland in 1939 (based on Poles being a "terrorist threat" to Aryan females) can't be countenanced under international law. These are guided by the Nuremberg Laws which were written after the conquest of the fascists in World War Two. Most particularly we have:

PRINCIPLE VI The crimes hereinafter set out are punishable as crimes under international law: (a) Crimes against peace: (i) Planning, preparation, initiation or waging of a war of aggression or a war in violation of international treaties, agreements or assurances; (ii) Participation in a common plan or conspiracy for the accomplishment of any of the acts mentioned under (i).

Note especially (i) which most directly embodies the entire pre-emptive war concept. It means exactly what it states, so that any nation found guilty of "planning, preparation, initiation or war of aggression" is thereby violating that principle.

The fact that so few Americans are aware of the above shows how ripe we are as a people to become even more PR-deformed.

Sadly, in the old days, before the disastrous implementation of National Security Council (NSC) Directive ‘NSC 10/2’ on June 18, 1948, this nation valued honor and only initiated wars unless first attacked. Thus, Pearl Harbor paved the way for our just entry into World War Two. Because honor underscored initiation of war, it thereby became a matter of honor to also have everyone help PAY for such using higher taxes and-or rationing of foodstuffs, gas etc. Because at that time we were on the side of moral right, we had the nation and the world with us.

Not so since that NSC 10/2 was enabled! The scope of activities enumerated under the directive included: “propaganda, economic warfare, preventive direct action – including sabotage; subversion against hostile states including assistance to underground resistance movements, guerillas and refugee liberation groups and support of indigenous anti-Communist elements in threatened countries of the free world.”

Ratcheting up the effect, and consolidating the impetus to Empire building was the document NSC-68, prepared by Paul Nitze of the National Security Council – completed by 1950. The document essentially contained the blueprint for unending strife and undeclared wars, all of which would be invoked on the basis of a zero tolerance threshold for foreigners’ misbehavior. The putative basis? To enable U.S. agitation, overthrow (or assassination) of democratically-elected leaders, and large and small occupations (ranging from the few thousand troops in the Dominican Republic in 1965, to more than 200,000 in Iraq by 2006.)

Thus, we lost our way as we invaded nations (e.g. Dominican Republic, Iraq, etc.) with no reason and engaged also in the overthrow of democratically-elected governments (e.g. Iran's Mossadegh in 1953, Jacobo Arbenz in Guatemala in 1954, assassinating Salvador Allende in 1972.) Thereby we lost honor, so that "war on the cheap" or more accurately "wars of choice" became the norm, to try to justify whatever was in the NSC 10/2 directive.

The motivating force of the Nitze document was clear in this regard:

“a defeat of free institutions anywhere is a defeat everywhere”

In other words, any place for which the U.S. even remotely construes a “defeat of free institutions” gives it license to intervene at will. This critical aspect is described thusly by Morris Berman (Dark Ages America: The Final Phase of Empire, W.W. Norton, page 118, 2006)
"Nitze emphasized the importance of perception, arguing that how we were seen was as crucial as how militarily secure we actually were. This rapidly expanded the number of interests deemed relevant to national security”

In other words, it provided the pre-emptive formula for unending war even before the Bush doctrine arrived. Gore Vidal pinpoints the emergence of the American Empire when he notes (Dreaming War: Blood for Oil and the Cheney-Bush Junta, Thunders Mouth, p. 124, 2002)

"Since 1950 the United States has fought perhaps a hundred overt and covert wars. None was declared by the nominal representatives of the American people in Congress…they had meekly turned over to the executive their principal great power to wage war. That was the end of that Constitution"

One would have hoped that MSNBC pundit Rachel Maddow in her new book, 'DRIFT' would have covered more of this backstory, but evidently not. Her focus was more on how "cheaply" war has been waged over the past 4-5 decades, effectively insulating the civilian U.S. populace from any real consequences. But she did not dig into the underlying deep causes, the offensive and dishonorable documents: NSC 10/2 and NSC -68. Well, maybe in a follow-up.

Maybe....at some juncture... one is connected with the other.
Posted by Copernicus at 8:44 AM