DO We Need A Missile Defense System in E. Europe? NO! 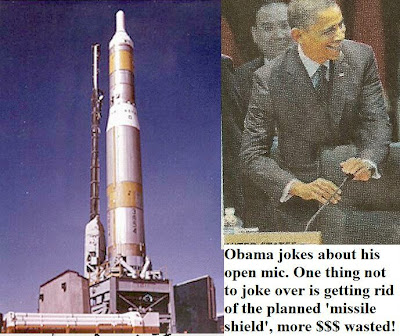 As the pundit gasbags on the Right continue to bloviate about Obama's "missile gaffe" (arising from an open mic in a recent meeting with Russian President Dimitry Medvedev, all sorts of conspiracy theories are being churned out. One (from Romney) implies our prez made some secret, slimey deal with the "Reds" that compromises national security. At least a few sane voices, mostly drowned out, observe (correctly) that there's nothing sinister at all, and Obama was simply delivering a stark political assessment. That is, given the nature of Reep-fomented gridlock in Washington, it's highly unlikely any new policies, or legislation or treaties will be passed before the elections in November.

But all of this bloviation and punditry overlooks the larger point: that the need for any "missile defense shield" in eastern Europe (mainly based in Romania and Poland) is as empty and bankrupt of value as the Reagan "Star Wars" bullshit of 25 years ago, and as stupid as Bush Junior's idiotic "national missile defense" system from ten years ago. (Of which this new system is really a makeover holdover- displaced to Europe). The fact is that none of these missile systems-shields really works, as particle physicist Wolfgang Panofsky first noted in his articulate chapter 'MAD vs. Nuts' in Particles and Policy (American Institute of Physics, 1994).

No such system has yet been devised (other than the limited "Patriot" batteries used in the 1990-91 Gulf War) that consistently can take down incoming missiles. (The Patriots worked about 50% of the time 'cause they were mainly going up against the crappy Iraqi SCUD missiles). In nearly every instance, as Panofsky points out, you are merely injecting a de-stabilizing force into a situation, and also one which - technologically - is always easily defeatable by appropriate counter-measures (which invariably are cheaper to employ that the measures that the anti-missile requires to nullify them!)

Even Stefan Niesiolowski, chairman of the defense committee in the Polish Lower House of Parliament has noted such a missile system is not needed in Poland. As he points out ('Missile Gaffe Leaves Europen Unfazed', WSJ, today, p. A8):

"There's no military threat and we haven't had a situation as secure as this in 300 years. The level of U.S. military engagement in Poland therefore is not of top importance."

WOW! No military threat? Then WHY do it?

The answer is simple: the military -industrial complex ensconced in the U.S. wants to invent ever more specious reasons to piss away ever more billions of our taxpayer dollars. And just like "Star Wars' and Bush's stupid system before it (where 11 of 12 intercept attempts failed and the only one that worked relied on a radiofrequency beam attached to the target missile), this Missile shield redux won't work either. Thus, it boils down entirely to monetary waste (for taxpayers) coupled with astounding extra profits for defense contractors and pork for congressional leeches. These are the sole purposes of this so-called "missile shield", which in the end, likely wouldn't shield the Poles or Romanians or anyone else from a raft of giant boulders fired by ancient Roman catapults.

Apart from that, the notion of Iranian missiles being lobbed into eastern Europe is totally ignorant. This is something that some moron brain stormer in the Pentagon would have dreamed up hoping the typical American would bite. First, Iran - even assuming it does possess enough quality IRBMs or ICBMs (say of a level comparable to the U.S. Titan I shown) wouldn't waste them on Eastern Europe! Second, they'd know in a heartbeat any such daft attack would be met with devastating counterforce, and maybe even tactical nukes. In a word, they'd be risking their own extermination.

Third, given these manifestly obvious reasons (and the fact that for such anti-missile systems to really work they need to nail the targets in the boost phase as Panofksy observes) the only conclusion left is that they're not really directed against "Iranian missiles" at all but against putative Russian missiles. THIS is why the Russians are eager to get this farce shut down, because they view such a shield as a threat to them. They interpret the shield as an effort by NATO-U.S. forces to neutralize any possible Russian attack, say if hostilities did erupt over Iran. (See the movie 'Threads' in a previous blog, i.e
http://brane-space.blogspot.com/2012/03/anxious-to-start-war-with-iran-see-this.html

Add to that the historical fact - which clearly escapes the U.S. military-industrial complex- that the Russians have been highly paranoid of any military activity around their borders since the time of Peter the Great, and you have a made for demolition derby on the international scene. One that any knowledgeable Russian observer will assert that will not be tolerated by the Russians no matter how many "security" or "shield participation" PR bones get tossed their way.
This is why Ellen Tauscher, Obama's envoy for Strategic Stability and Missile Defense is dreaming when she claims (ibid.) that "the U.S. is seeking to get Russia inside the missile defense tent now".

This will not happen, not now or ever, because quite bluntly the Russkies do not see missile "defense" as a tent but as a THREAT! And there is no amount of diplomacy or whatever..that will convince them otherwise.

The best thing for the Obamanites therefore, is to drop this idea entirely, and tell the Pentagon and MIC to stuff it where the Sun doesn't shine. Don't even remotely consider using this as some form of political policy leverage vs. the always ready for war and increased defense -spending Repugs. They will ALWAYS want more military spending for any and everything - from missile shields, to more Mideast bases, to combat air brigades in Colo., to another 2,800 F-35s - in order to bleed down domestic tax revenues to enhance and justify their demand for deficit hawkism and austerity!

The worst part isn't the alleged "missile defense" unworkability, but that others (e.g. Russians) may bite and think it is feasible and a very REAL threat. This is the point made by Wolfgang Panofsky in his monograph, Particles and Policy, Chapter 'Mad vs. Nuts') wherein he observes that any U.S. missile defense system - practical or otherwise- will spur numerous counter measures and fully offensive nuclear systems. THIS is the stark danger we face!

The ultimate effect being to massively destablize the nuclear balance. Perhaps this is why the 'nuclear clock' (which gives a metaphor to the proximity of nuclear holocaust) has moved a full minute forward since the Bushites pushed the original missile shield. (See The Bulletin of the Atomic Scientists,Vol. 59, No. 6, 'Neocons: The Men Behind the Curtain', p. 62)

This is even more reason for Obama not to fall into the same snare.

Bottom line: we don't need a phoney-baloney, pork-program 'missile shield' that will only enrich the defense contractors, destabilize geo-politics and alienate long term allies. What we need is what I've said many times before: building security from the ground up, by people to people transactions, and engaging serious talks on dismantling remnants of Cold war nuclear warheads (especially in the former Soviet states) and rational settlements as opposed to political pandering.

Anything else is really just a deflection and distraction from the more important tasks and objectives, which lays a destabilizing groundwork we don't need, period. It is time to tell the military welfare queens (including the congress critters who stand to reap the pork benefits) behind this Rube Goldberg scheme to piss off.
Posted by Copernicus at 10:15 AM