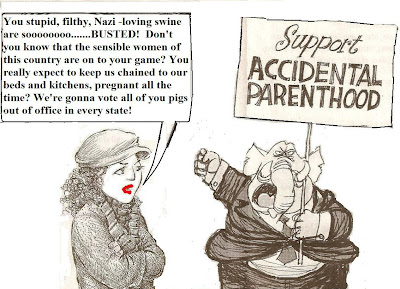 Even as it appeared that after Rush Limbaugh's exposure as a vile swine, the pro-Woman side of America might prevail, subsequent news items disclose this war on the nation's women continues unabated. And it continues on multiple fronts, disclosing that women - especially in the age group 18-29, cannot let their guard down. Because it is clear that the GOP agenda intends to link up with the anti-birth control zealots of the RC Church and condemn them to perpetual chattel if they (GOP-ers) get control of all branches of government again. (Which is possible if 2008 Dem voters slack off and don't come out for Obama in November!)

1) In Texas Gov. Rick Perry has suspended all operations of Planned Parenthood which had hitherto provided some $35 million worth of free health care, including free breast, cervix exams. Now, more than 1.6 million poor Texas women will have to do without, though Perry insists he will find other private sources or state monies to make up the slack. And if anyone buys that I have 3,000 acres of Barbados' prime coastline property to sell you at $1 an acre!

The fact is, these women will now likely have to go without at immense future cost to themselves and their families. But....what can you expect in a state whose governor earlier declared Fed Chairman Ben Bernanke guilty of "treason" and had actually 50 years earlier murdered a sitting President (JFK) after plastering "Wanted for Treason" posters all over Big D because he intended to pull out of Viet Nam and oh yes.....remove the oil depletion tax allowance.

2) Women in Arizona, thanks to a bill now nearing passage (The Denver Post, today, p. 5A) in the state's Republican led legislature will be required to prove they are using birth control prescription drug exclusively 'for medications such as acne' - rather than to prevent pregnancy - if they hope to be reimbursed by their insurance companies. If it is discovered they're taking birth control pills to try to impede pregnancies, they will receive not one red cent back.

This is because the Arizona bill will allow any employer - not just religious institutions -to require women to reveal what's being taken and why in order to get reimbursed.

Now, women of America, imagine this on a national scale! If the Repukes claim all branches of gov't in November, it can easily become a national reality. Or better, a nightmare for you!

3) in Virginia, that governor has gone ahead with plans to require any woman seeking an abortion to have an invasive ultrasound, in which a large probe is inserted into her vagina - which many female Virginia protestors have rightly compared to medical rape. This governor, Bob McDonnell, had pulled the bill back after a righteous outcry, but his knuckle- dragger legislature re-approved it without much fanfare. He defends it as a "small price to pay" if a woman is determined to have an abortion. To which I say, 'Bollocks!'

4) In Wisconsin, an "abstinence-only" bill has now been passed 60-34 by that state's Gooper legislature according to a story appearing in yesterday's WSJ ('Abstinence Push Wins in Wisconsin', p. A7). According to Sara Finger, executive director of the Wisconsin Alliance for Women's Health (ibid.):

Indeed, and one can compare the 47% increase in out of wedlock births in this country to near 0 % in the Netherlands, where kids learn first hand about contraceptives - including condoms- from the age of 5th graders. The Dutch, at least, pragamatists that they are, harbor no illusions on how youngsters will behave and the power of their hormones once set in motion.

Meanwhile, this egregious bill comes barely a week after Utah Reep lawmakers approved the nation's most restrictive sex education bill and a year after North Dakota required that sex ed classes instruct students exclusively on the merits of abstinence. All of which paves the way for "paper virgins" but definitely contributing even more to the explosion of out of wedlock births and likely to unwanted infants.

Lost, of course, are all the fell ways this will impact our nation's long term health, e.g.

Meanwhile, a 2008 federally-commissioned study by the non-partisan Mathematica Policy Research Inc. found that students enrolled in abstinence -only programs were as likely to engage in premarital sex as their peers who weren't enrolled. The difference, of course, is that the peers were more likely to be familiar with and use protection and hence prevent unwanted births, while the condom-averse were not. Hence, this would explain a lot of the increase in births to unmarried under -30 women the past three years.

Even beyond the serious issue of women's autonomy over their bodies stands the larger moral issue of over-population of this planet. The fact is, over-population is aggravating all the most serious environmental problems we face from global warming to the accumulation of toxic wastes to the poisoning of our water from fracking, oil shale drilling. In this sense, humanity's ultimate well-being is threatened by the consequences of an overpopulated world. As one letter writer put it in yesterday's Denver Post:

"No matter what your religion: to pretend not to see the consequences of uncontrolled births, which are all around us, is not just short-sighted, it’s heading toward catastrophe. Religious “freedom” that forces families to have children they cannot afford or care for is not freedom; it is tyranny."

Indeed! But the tragedy is that it seems for every intelligent person (such as Anne Culver, the writer) there is an idiot, usually a male, who writes bollocks such as the following appearing in the same edition, complaining about an earlier DPost piece showing women protesting with signs reading 'Birth control is health care':

"One woman is pictured (mouth agape, perhaps yodeling) with a sign that reads, “Birth Control is Health Care.” Great. Agreed. But so are toothpaste and soap. Does the government owe us these? Aren’t aspirin, vitamins and Band-Aids elements of health care? If so, where does it stop? When everyone gets a pony?" - Kent Karber, Colorado Springs

Note this twit hails from Colorado Springs, redoubt of the Far Right nutcakes and home to such fundie bastions as 'Focus on the Family'.. The guy is obviously an idiot, since he conflates toothpaste and soap with birth control, not understanding all the serious medical conditions (such as ovarian cysts, and endometriosis) that the latter treats ......which bear no similarity to plaque on teeth....or grime on skin.

But this is what we can expect from the other side, most often (I'm ashamed to say) males! (Such as the assholes leaving comments about Sandra Fluke on the C-Span page with her public statements to House Dems.) Makes one wonder if another lineage of American males was born directly from chimps, or maybe orangs or baboons. No, wait, that would be an insult to those primate species.

All of this leaves unanswered the question of why the Repukes have such boners to keep women in thrall, subservient, pregnant....as the planet is overpopulated even more than it is.

One plausible answer was provided by author Russ Bellant in his stunning book, 'Old Nazis, The New Right and The Republican Party', South End Press, Boston, 1991, p. 77. Bellant painstakingly documents how Nazis, former S.S. infiltrated the Republican Heritage Groups and Council from the time of Reagan's ascension in 1980. He provides actual letters written and received as well as how their agenda is spelled out. He also notes a key figure who had established connections many decades earlier, i.e.

"Philip Guarino helped establish the ethnic division of the GOP in 1952. He was vice-chair of the Republican Heritage Groups Council from 1971-75."

By April 8, 1980, Guarino "was a senior member of the Republican Party National Committee, which at the time was concentrating all its efforts on getting Ronald Reagan elected President." (Recall Reagan also gave a nod to these vermin when he visited the grave site of a Waffen S.S. in Bitburg, W. Germany. The PR at the time was that it was "an accident", but don't buy it for a fucking second!) The "ethnic division of the GOP" refers to Ukrainian and Latvian assistants and associates, or members of the extension group affiliated with the German Waffen S.S. which had helped carry out pogroms during WWII- usually butchering Jews and communists in their own nations. (Recall, Hitler often conflated the Jews with Marxists, communists based on the fact Karl Marx was a Jew.)

To make a long story short, part of the GOP agenda dating from this Nazi infiltration, included banning birth control methods (as the Reich Courts did under Hitler) as well as all abortions. We see the same sort of plans now being carried out in the state courts, and no doubt the intent is to parlay these nationwide, in the GOP hopes that they can unseat Obama, while also retaining the House and grabbing the Senate.

Alas, most of these Repuke -Nazi affiliations would have been laid bare if a particular law ('The Nazi War Crimes Disclosure Act') were to have passed, but a GOP-controlled congress voted it down in 1998. Had it passed, tens of thousands of top secret documents from many federal agencies would have been declassified and transferred to the National Archives. These would have included the earliest connections of S.S. - Nazis to the Republican Party.

In perspective, as many pundits have tried to parse and explain why or how the GOP has turned so far right, they'd have been provided with all the explanations available in Bellant's book. The Nazi seed having been sown, the far right move as exhibited by today's GOP was all but foretold.

American women, refuse to be GOP-Nazi slaves! Do NOT vote Repuke in any elections this year!
Posted by Copernicus at 10:23 AM