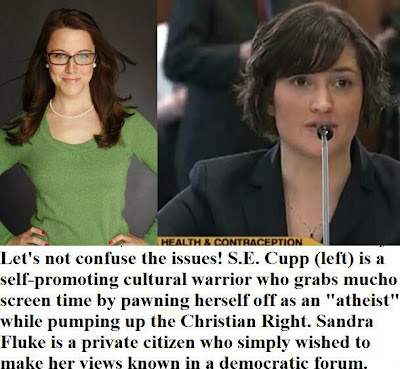 Well, we knew it wouldn't be long before the Reich Wing and its sock puppets came out again with the only pseudo -defense that they can muster (after the outrage that erupted over El Rushbo's vile attacks on Sandra Fluke): "Na, na, na.....them nasty lefties did it too ....to Sarah, and Michelle, and and all kind of conservative women and the media gave 'em a pass!"

And isn't this game getting old by now? I mean we already saw it played out nearly two years ago as hundreds of tea bagger outrages reached fever pitch, including cutting gas lines, and tossing bricks through Dem legislators’ windows. The corporate media - spurred on by the Reich blogosphere (including the late Andy Breitbart) then switched into false equivalence or “the incivility is on both sides” mode, as it dredged up incidents of past leftist abuse and attempted to place both right extremists and its concocted left extremists on the same spectrum of misbehavior.

It wasn't until salon.com punctured this crap in a lead story, for March 26, 2010 (‘Eric Cantor’s Phony Victim Story’), that the truth emerged and scales fell off the public's eyes as they beheld it was all a ruse designed to distract from the ongoing right wing violence and portray conservatives and the GOP as much victims as the Democrats. Meanwhile, the Richmond, Va. Police confirmed the bullet was a stray. Salon also noted the building was totally nondescript so there was no indication that Cantor or anyone else lived there. Cantor invoking his Jewish heritage made his spurious charges even more reprehensible, painting the putative “angry leftist” as also anti-Semitic.

But the kibosh was delivered on this "mutual incivility -rage" idiocy long before the tea bagger displays of intermittent explosive disorder appeared. Thus, in a special issue of the Southern Poverty Law Center’s Intelligence Report ('Rage on the Right’, Spring 2010 (Issue137), page 43) the extent of right wing hate groups throughout the country was firmly documented including their locations by code (for Patriot Groups, White Nationalist, Ku Klux Klan, neo-Confederate-Secessionist, Racist-Skinhead, Neo-Nazi and Christian Identity. A total of 932 hate groups – all on the Right, documented by the SPLC staff (this number is now well over 1,300).

My point is that just as the faux outrage of the Right back then was exposed for what it was ('Blame the Lefties! They did it too!') so also is their response now after El Rushbo exposed himself as the bombastic, reckless jerkwad he is which his favorite party worships then asks permisison of before they even take a dump. Yet we have commentators who ought to know better, like Denver Post op-ed columnist Vince Carroll in yesterday's Section B, opining that the media have allowed "Bill Maher, Keith Olbermann, Jimmy Fallon, Ed Schulz" and other left -leaning males to get away with murder in putting down Sarah Palin, Michelle Bachman, Michelle Malkin, S.E. Cupp, Laura Ingraham, Ann Coulter and other Rightist female poppets, puppets and imps.

Now, let's set the record straight and indicate why this false equivalence is also false analogy. First, there is the issue that all the conservo females verbally taken down were powerful public figures, who either were running for high office (as Palin was in 2008) and had access to the media or who themselves operated within a powerful media realm where they had open access and hence could blast anyone any time they wished. Some (e.g. S.E. Cupp) even were granted access by virtue of false positioning, e.g. pretending to be an "atheist"(but spieling for religious liberty etc.) and thus open to more objective presentation of cultural issues than a normal person. Thus, I already dismissed the likes of Cupp and her fake "I'm a real atheist" road show in a prior blog:

As for Palin, let's recall Maher's most aggressive attack on her (which was only incepted and prompted by The National Review's Rich Lowry bloviating how "hot" she was - along with other conservo males) was right after she'd appeared at a fall 2008 campaign rally somewhere in GA and a number of her hangers-on, groupies and applauders had strung up an effigy of then candidate Obama and ....hung it! What did Palin say? Nothing to deter or stop them! Instead she fed the frenzied mob with her own rhetoric on "terrorists" and dragging in "William Ayers" to link to Obama. She merited no quarter, and she got none.. (Though I will admit in retrospect that SNL's Tina Fey did a much more thorough number on her with longer lasting effects - see also the upcoming HBO movie, 'Game Change')

As for Michelle Malkin, I've ripped that little floozy a number of times over her despicable columns and in any case, Keith Olbermann was a lot more generous than I was ...because as Keith noted on his Current TV two nights ago, his references to Malkin (e.g. as a "sack of meat") were actually from an old HBO series and the reference was not gender specific, but specifically emphasizing a lack of humanity! As Keith noted, the same phrase would have been apt for male or female.

As for Sandra Fluke, unlike the Reepo female power brokers and players who've been rightly attacked, she is a young private citizen who has NO radio or TV show, and no syndicated column (read by millions) by which she can rip others to smithereens. Nor does Sandra have any pretensions to any public power or public office - or have major political parties or Super-PAC money funding her!

She is merely one lone, private individual speaking out from her heart from the seat of what is putatively a democracy....and for a right she believes all women should have. But the beastly Right has projected their own fell ambitions and motives onto her, the latest is that she's doing all this for "attention" and "self-promotion". Puh-leeze, give me a fuckin' break already! Would anyone in their right mind, other than a foursquare truth teller, put themselves out there for this much public abuse based on the flimsy basis of ego aggrandisement? Only a moron would believe so but evidently plenty on the Right do!

This compares with Limbaugh's rant, which as one Denver Post letter writer pointed out in today's paper, was rendered:

"while hiding out alone, in a tiny radio room somewhere ...spewing his faceless bile to a like-minded audience".

Will people be intelligent enough to understand the differences here? We don't know, but to put it Keith's words: "I'm not holding my breath!"
Posted by Copernicus at 10:25 AM