Rugrats On Planes: Is There A Solution for Toddler Meltdowns? 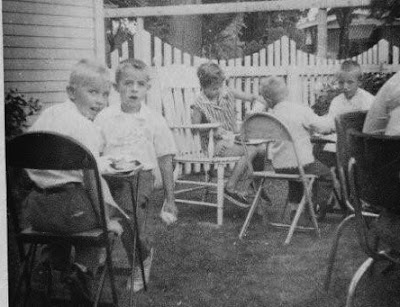 Top: Five siblings eating quietly at a 1959 Milwaukee, backyard family picnic. From the time you were a rugrat you didn't act out back then...or your heinie paid for it! 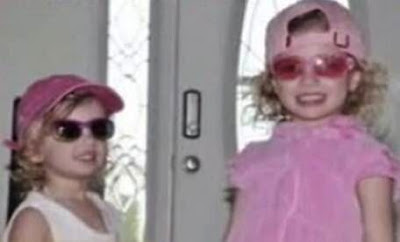 Bottom: the two Vieau kids involved in the Jet Blue Feb. 18 incident. Do these kids look entitled, or what?


Back in the day, maybe the late 60s, when economy class flying wasn't such an onerous chore - flyers were in a more generous mood when confronted with the occasional toddler outburst or meltdown. After all, you had aisles that you could easily walk down, a decent backseat pitch so you could actually put your chair back without clonking the guy's noggin behind you, and there was halfway decent airline food. (At least on the National Airlines flights I usually took out of Miami to New Orleans).

But all that's gone now. Aside from the lengthy waits, the indignities suffered at check-in TSA inspections, and then having to fight with other passengers for luggage space above the seats, there is the absence of even a semblance of food (ok, maybe the occasional pretzels) and your seat pitch is so stuffed (sardine -style) that if you try to recline you are likely to initiate an "incident". And who wants that?

So to put it bluntly, most passengers by the time they do get in their seats are in no mood for toddlers screeching away, hurling their nappies or sippy cups or anything else - least of all pitching a screaming fit. And oh yes, the passengers so affected will be directing the "evil eye" - or at least rolling normal eyes - at the guilty parents of the uncontrolled rugrats...errr...offspring. And don't even think of delivering the chippy come back: "Well! You were once a child too!" If you don't want to precipitate another incident.

All of this comes to mind as we hear once again of an incident, in this case of one Rhode Island family, recounting the tale of how they were kicked off a JetBlue flight—headed to Boston from Turks and Caicos—because their two-year-old child didn't want to sit safety-belted (restrained) in her seat and instead wanted to be held by mommy. (Against airline policy).

As the kid melted down objecting to the restraint of her seat belt, and the mom did her best, the pilot decided to turn the plane around and return the family, Dr. Colette Vieau, her husband, 2-year-old Natalie and 3-year-old Cecilia, to the airport. There were no other flights to Boston that day, so they ended up spending $2,000 for a hotel and a new flight back.

Vieau told Providence's NBC affiliate that Natalie was "having a tantrum" on the February 18th flight and it took some time for them to get her back in the seat, with seat belt, "We were holding them down with all of our might, seat belt on."

The JetBlue response said, "Flight 850 ... had customers that did not comply with crewmember instructions for a prolonged time period. The Captain elected to remove the customers involved for the safety of all customers and crewmembers on board."

Mom Colette Vieau wasn't mollified and insisted she complied and did all she was asked to do. Maybe, maybe not. I have been on flights - such as one memorable one from Atlanta to Fort Myers in 2001, when a toddler was temporarily controlled, then ten minutes after takeoff, pitched a steady fit for the duration. The kid's high-pitched 140 dB whine still reverberates in my ears when I recall it. It was pure torment - and that was having been seated just forward of the tyke. Other passengers were obviously also affected, including one guy who grumbled on exiting...."Damned good case there for retroactive abortion!"

In the Feb 18 Jet Blue case, Dr. Vieau herself admitted, “I don’t know that I could blame JetBlue, to be totally fair. I just feel like it’s airplane travel today in general.”

Well, yes! Which is why today, parents may have to be encouraged to think not once or twice but multiple serious times before lugging one or two or more rugrats on a trip where they will have to act at least semi-human for a prolonged period, and not meltdown or make everyone else miserable. Not all people today believe in or accept the child-centered American way of raising kids, after all. (See the new book, 'Bringing up Bebe!" by Pamela Druckerman, which one niece brought to my attention- on how French parents do not cater 24/7 to their rugrats.)

Meanwhile, salon.com columnist Mary Elizabeth Williams in her piece on the incident and its aftermath observes:

"We all have to navigate a pretty crowded planet together.Kids don’t make it easy – they are volatile, difficult and often really annoying beings, it’s true. But they can’t stay home until they learn not to scream and poop in their pants. Sometimes they have to travel for family reasons, and frankly, they’re entitled to for recreational ones. They’re people, and as such, they can be jerks just like everybody else. A parent doesn’t always know, on the morning of a flight, whether she’s going to get Quiet Little Napping Girl or Hellspawn Baby for the day"

This may well be so, but it begs the question. When little Katie, Katniss or Eldredge DOES have a mighty meltdown, then what? Do you just let the miniature human carry on disrupting everyone else or ....what? No one disputes a toddler, or tyke may have to get on a plane - say for granny's funeral- at some point, but there must be solutions in place to deal with a tantrum that don't mean sacrificing everyone else's sanity!

There are likely two ways to deal with such situtations, neither of which may be appealing to modern kid-centered Americans, but which I believe are better than getting boffed off a flight and having to pay for another.

First, there is the physical intervention. In today's PC climate, of course, "child abuse" is the first thought that enters a kid-centered culture's collective mind, even if the parent dispenses a light whack on the seat of the pants. But it need not be so. In the 1950s kids were whacked for any and everything. Hell, the nuns that operated the Catholic elementary school my brothers, sister and I went to, found an excuse to whack your ass, or pull you up by the ears, or apply a 3' pointer to the hands, if you were even slouching in the seat. No one came off the worse for wear, even those kids (unlucky few) who got on the wrong side of Mother Enda's paddle. That's the way it was - bratskies weren't tolerated! If you copped an attitude, you GOT attitude!

Kids were also disciplined from the time they were knee-high to a grass hopper. I can recall the time as a four year old cutting up and laughing during a Mass, and afterwards got a solid spanking for it. Not abusive ....but rather effective. The same thing for my 2 -year old brother Mike, when he acted out, and my other brothers. On one trip I took - to Atlanta in 2009 for my dad's funeral, I recall a toddler pitching a fit two rows ahead when his mom gave him one warning to stop...then, when he refused, whacked his ass a couple times. That shut him up for the duration, which shows me that often it's a case of the kid matching his or her will against a parent's. The trouble is, if the kid is allowed to get away with it, the peace of mind of dozens of other people is sacrificed. Worse, the absence of sanction reinforces the bad behavior to make it more likely to happen again!

A last alternative, is to knock the kid out with some kind of mild sedative. This is obviously a last resort, but hell ...most dentists demand it or they will not work on a toddler's teeth. Obviously, if a kid is resisting any kind of seat belt restraint on a plane, and the alternative is pitching a fit and screaming bloody murder for 2-3 hours this option must be considered, if a hand swat or spank is ruled out. (Personally, I'd prefer the swat or swats to the sedative.) This way, the kid sleeps or is out for the duration, and then on landing....up and at 'em. The passengers, meanwhile, are spared the histrionics.

The one downside of this is I know of no specifically-directed sedatives - of the explicitly correct dose - for such a purpose as temporarily chemically subduing an unruly rugrat. Maybe here is where Big PhrMA can finally put all that free money they get to good use ....and come up with a solution both feasible, and safe! The downside is we may have to wait 5 years for the FDA to render it "safe and effective".
Posted by Copernicus at 10:48 AM

Thanks for sharing two very interesting posts in your blog ("Middle-Class American Parents Need to Stop Being Wimps" and the one above, linked there), both very helpful to my research on behavior. I fully agree with your opinion and am saddened to see it's turning to be a tendency in our modern society the ubiquitous presence of extremely licentious parents.