WHO is Waging the REAL War on American Women? 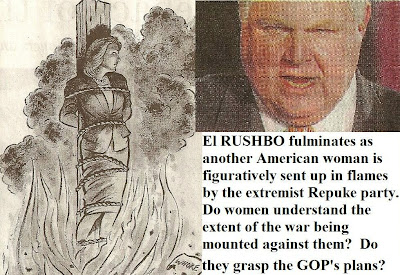 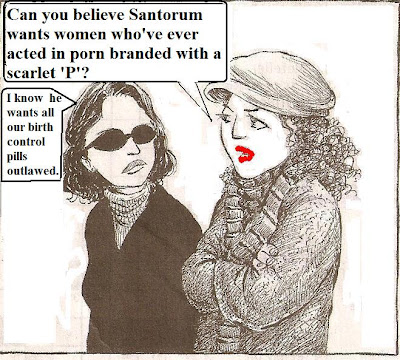 As I write this, an insidious psychological warfare is being ramped up against women, to attempt to subvert their willingness to vote for President Barack Obama. The warfare is being conducted by an elite phalanx of GOP-backing women columnists who want American women to believe it is the Democrats and the Left conducting the actual war on all birth-age females, never mind the GOP has pronounced all contraception an unholy and ugly strategy and demanded women be subject to accidental births.

But this thinking is not new, and actually goes back to Ben J. Wattenberg's (1985) book, The Birth Dearth, in which he argued that American women are under-reproducing and "the resulting missing babies translate into missing producers and consumers, soldiers and sailors, mothers and fathers". In his message of stark insanity, he warned that unless American women win the demographic numbers battle against the black and brown peoples of the planet, we will "be faced with a world where the U.S. will no longer be the most important country in the world". In the same book, he designated that black Americans be invested in reproducing for soldiers, and white, for consumers.

That this execrable book got any attention at all is a wonder, but its memes are still with us, as when assorted pundits writing out of their asses, proclaim we need to 'make more babies' to support those on Social security. (Never responding as to how the supporting workers will be supported themselves, unless one allows the floodgates of immigration to open and the U.S. to end up with nearly as many people as China).

Now, fast forward more than 25 years and we find a polished veneer of moralistic opprobrium has been superposed on the arguments for consumption and warrior units. Women still aren't producing up to snuff, never mind we have way more people than resources to supply them - especially with the 1% grabbing so much- and also assorted "Christians" are getting involved to try to shame women and make them passive in the wake of ferocious attacks against their right to use birth control - and have it affordable.

Ms. Sandra Fluke made the original case, and she was a private citizen, with no outstanding radio or TV show by which to defend herself against a savage 3-day attack by El Rushbo, the Swine, Limbaugh. She spoke her heart and mind before House Democrats and Limbaugh attacked her for "demanding U.S. taxpayers subsidize her sex life"! He then used horrific, vulgar language to describe her, which I refuse to repeat here.

Now, the name calling was bad enough, and that's what aroused the fury of the Left and many millions of women. But more insidious than that - or certainly comparable - was Limbaugh's vile lie concerning "forcing government to pay for birth control, or subsidizing women to have sex." This lie, as a number of liberal pundits have observed (e.g. Doug Allen in The Aspen Daily News ('Pants on Fire', March 14) was also one that 20 million of Rush's zomboid-dittoheads were prepared to accept. The memetic shorthand is as decribed by Allen (ibid.):

"Obamacare is forcing the government to pay for people to have sex."

How could anyone with even the most menial intellect believe such utter, unadulterated bullshit? Well, millions of "dittoheads" could, because they're incapable of critical thought. If Rushbo bellows it then it must be true. And as Allen observes: "Repeat a lie often enough and it becomes true for a certain segment of the population."

The truth, meanwhile, doesn't revolve around any question of “religious liberty” at all – or of government forcing taxpayers to pay for anything they do not want. It is rather a matter of religious enterprises operating in the PUBLIC domain and attempting to place themselves above public laws that apply to all other public-operating institutions enterprises etc.

Thus, I have no problem if the Roman Catholics want to deny use of contraception (which btw is NOT a fundamental belief or teaching – as it issues from the Magisterium or teaching office not ex cathedra or infallible) to THEIR own followers – but if they operate hospitals, schools in the public arena and offer health insurance in that arena then they’re obliged to offer the same standard of health care – including contraception (which btw is used to treat many other medical issues such as endometriosis which affects 1.5 million women a year) as other insurance to their workers (e.g. teachers, nurses etc.) who are NON-Catholics or even atheists.

If they don’t want to do that and declare “religious exemption”, then fine – withdraw their tax exempt status and let them operate as strictly RELIGIOUS institutions.

It ought to be noted too, that in many of these plans, the bulk of the money is paid in by the employees themselves, so there's even more reinforced basis for them to have the final say on what they can get ...or not. And again, the issue is standardization of health care, not a "cafeteria" style of care dictated by religious preferences which aren't even based upon core beliefs. (In terms of Catholic core beliefs, transubstantiation qualifies, but not prohibition of artificial birth control!)

Now, we come to the psychological warfare of the conservative phalanx as embodied, for example, in one of Peggy Noonan's recent pieces ('America's Real War on Women', WSJ, March 17-18, p. A15). According to Noonan's rubbish- pile column, it is the jesters of the Left and also its pundits making war on American women, not the darlings of the Right or the pederast priests and their Bishop enablers.

Top of Noonan's hit list for "prize pig" is journalist Matt Taibbi who she claims "becomes emotional and can't control himself when writing about women". Of course, after this whopper of a generalization she gives only one example- where he (rightfully, imho) lambasted a female conservo media figure noting: "When I read her stuff I imagine her narrating with [male genitals] in her mouth." First of all, that snarky response was not delivered in a column, but on satirist Bill Maher's show some months back. It was aimed at Michelle Malkin who is as notorious and odious as Ann Coulter in terms of female stormtroopers of the Right -who also possess their own media soap boxes and can defend themselves very well, thank you! (Recall in one of Coulter's books, she demanded we invade Muslim nations and give them the choice of either converting to Xtianity or being slaughtered.)

Malkin, recall, earlier (ca. May 24, 2011) had penned a horrific column ('Adult Baby Syndrome: It's the New American Waaaahh') in which she basically compared all those on Social Security Disability - like my younger brother with multiple sclerosis, and now blind from diabetic retinopathy, to "infants" suckling on the teats of the "Nanny state". Her gross depictions, in a syndicated column going out to millions, certainly merited a takedown, and she got it - and she deserved it!

But make no mistake that Taibbi's one time short, colorful oral aspersion on someone like Malkin in no way compares with Rushbo's 3 day diatribe on Sandra Fluke, including comments that she "could barely walk" after sex. Ms. Fluke, again, was a private citizen testifying as such before a House sub-committee, she was not a media star, didn't have access to the radio or Tv airwaves, or access to her own column (like Malkin) to properly defend herself. So, it's comparing chalk and cheese.

As for her rant against Keith Olbermann, I already noted in a prior blog:
http://brane-space.blogspot.com/2012/03/here-we-go-againfalse-equivalence.html


that his description of Malkin as a "sack of meat" was actually from an old HBO series and the reference was not gender specific, but specifically emphasizing a lack of humanity! As Keith noted, the same phrase would have been apt for male or female. Certainly, anyone who'd mock a person with MS and also blind as an "adult infant" dependent on the Nanny state on account of receiving Social Security falls into the inhumans category,.so KO's turn of phrase is even mild compared to what I'd have used.

Lastly, with cheap arrows left in her quiver, Noonan turns her sights on who else? Bill Maher! She ignores or dismisses the fact he's a comedian, a satirist, and hence has much more latitude than Limbaugh does who rants in a deadly serious capacity over 640 stations to his political soul mates, if that's what you can call them!

"Bill Maher has become so rich on sexism he had a million dollars to give to Mr. Obama's re-election campaign."

Which is bare bollocks, because Maher's wealth has not come from "sexism" but from a snappy, smart and funny shtick (featured on HBO's Real Time) in which he has re-invigorated what he did best on the old ABC program 'Politically Incorrect' - from which he was tossed out. Not because of "sexism" but rather the honest remark that the ones who flew jets into buildings on 9-11 had to have had some balls to do so than those firing drones long distance from 5,000 miles away. The Powers that Be on the network let Maher know that such incorrect thinking was not acceptable, and he could take a hike. He reinvented his show on HBO, and also in his stand up routines...again with the prime objective to take down sacred cows in our dishonest culture ...not singularly focus on sexist jokes!

Does he have a few? Yes, but they're only directed at powerful female conservative figures (e.g. Ann Coulter, Sarah Palin, etc.) who have the power to fight back from their own media stages, unlike the unarmed Sandra Fluke with Limburger.

As for Noonan making much ado about Maher's $1m donation - that wasn't given to "Obama's re-election campaign" but to a super-PAC. She can't even be technically correct on her descriptions when she has the chance.

And nowhere, not in one sentence, do we hear a word from her about the hundreds of millions of dollars being given to the repuke campaigns to undermine women's reproductive rights, or to mock global warming as "unproven" or to launch thousands more fracking and oil shale drilling sites despite the latest news (reported four days ago by the CDC) that the air in towns where such drilling occurs, is 5-20 times more contaminated within five miles of the drilling.

Obviously to the likes of Peggy and her friend Michelle Malkin, thousands dying of cancer from toxic plumes near fracking sites, or MS-impaired citizens dying from lack of Social security disability, are trifling by comparison to an occasional "sexist" joke aimed at conservo harridans who rightfully deserve them.....and have the power to rebut them any time they wish!
Posted by Copernicus at 11:29 AM