A Guy From Barbados Who Has NO Clue on Reality! 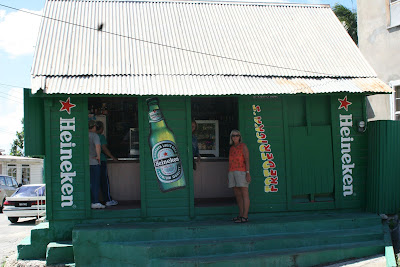 Probably 50% of working Barbadians are entrepeneurs with their own small businesses, such as this corner rum shop owner. In many cases, their property ownership arrived via inheritance not purchase!

This morning I read an article appearing in The Barbados Advocate News, e.g.

with open-mouthed disbelief. The article ‘Population the Problem- Not Land’ (March 24) quotes Managing Director of Terra Caribbean, Andrew Mallalieu as asserting that in order for more property to be owned on the island, its population needs to be increased! Is he serious? He can’t possibly be!

According to the 2010 CIA World Factbook, Barbados has amongst the highest population densities on the planet with over 654 per square kilometer (1,692 per sq. mile)! The issue of "unused land" therefore cannot have anything to do with "too few people" inhabiting the island nation, but rather the distribution of wealth which allows the few (often wealthy foreigners) to own large mansions- say in St. Thomas- but the masses to have to crowd 8-10 in one chattel house in the Bayland.

That Mallalieu doesn’t grasp this discloses he doesn’t comprehend the roots of the island’s land-ownership issues or, I would argue, the distribution of incomes! Obviously then, the reason more plots of land aren't occupied, or subject to ownership (including home ownership) is primarily because the incomes of would-be owners is too low, and they can't obtain a mortgage or credit. This is the same reason that's hamstrung many would-be owners in the U.S.

The article then notes:

"Mentioning China, a country which has seen great economic growth credited mostly to the size of its population, as an example, the Terra Managing Director suggested that Barbados is in fact capable of sustaining more people. "

But this is arrant bollocks! Comparing Barbados to China is ludicrous, because first China’s land area is thousands of times larger (21, 640 times, actually), and moreover the population density is very much LOWER (according to the same CIA Factbook it is 142 per sq. kilometer). In addition, China has the innate natural resources to support affordable building of domeciles for most of its people - and also a large industrial manufacturing base for them to earn enough- Barbados must import nearly all its materials (and most food stuffs) and now relies mainly on offshore banking & tourism for income.

Thus, if even food imports were cut off, Barbados with even more population would surely suffer starvation on scale even worse than Haiti. With so many people, even as many as it has currently, it would not be able to feed itself!

While true, a number of nations have attempted to grow economic prosperity via population (e.g. Nigeria) an analogous increase has not existed for China over the last 3-4 decades since it's implemented a firm 1 –child per family policy. This also explains why it's population density is so low, thereby imploding Mallalieu's arguments for Bim to take China's path.

Indeed, the Chinese understood (as the late Clyde Gollop did when he launched the Barbados Family Planning Association in the 60s) that unless something was done to curtail excess population growth, China would remain an under-developed, overpopulated 3rd world backwater whose resources wouldn't match the numbers. China’s success, in other worlds, has come precisely from population control not license.

Mallalieu is correct that economic prosperity – or rather the lack of it – is at the root of property ownership imbalance in the island. But adding more people is not the solution to acquiring such prosperity, essentially overturning Clyde Gollop’s efforts! What is needed is to address the economic retrenchment ongoing since the 2007-08 recession which still affects many nations. Thus, it is capital that must be grown and distributed more equitably, which can only arrive via outside investment.

This external capital must be applied not just to warehousing in offshore accounts but to actual, active investment in jobs for the Barbadian people (well paying so they can afford to be property owners) and also investment in construction of affordable homes.

Why isn’t Barbados attracting outside investors to construct affordable condos, or homes on the available lots? Instead of expending so much energy on tourism, organize to make sales pitches to real estate investors in the States! Also, adjust laws to make construction beneficial to would be investors! At the top of this list, as pointed out recently by The Economist, is the fact so many Caribbean states lack laws to ensure completion of projects – i.e. if raw materials are short, labor input just ceases and laborers vanish to move to other projects. Thus, hotel builders (as in the Dominican Republic) have found multi-million dollar projects languishing uncompleted while being out tens of millions. Thus, they are disinclined to begin new projects.

Where is the island's pitch also to bring jobs to Barbados, to supply the adequate income needed to buy the homes? These are the questions Mallalieu and his group need to address.
In short, the problem is not too few people in Bim, but too little investment capital needed to support major capital works housing projects, and jobs.

If Barbados and Mallalieu’s group can attract that capital, they will not have to resort to a draconian population growth solution which ensures Bim’s prosperity dwindles over time because its numbers are permitted to outpace its limited resources.
Posted by Copernicus at 1:34 PM