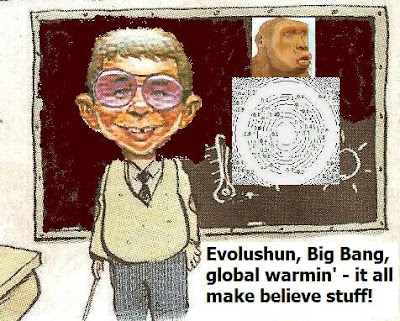 In a recent Washington Post piece by Chris Mooney, the author seeks to make sense of the incredible resistance of major portions of the U.S. population to the latest scientific findings. This is important, because our nation is already becoming a laughing stock for most of the advanced world - who mock our defiant anti-intellectualism and specious comebacks to everything from evolution to human-induced global warming.

As a point to be made here, a Pew Research Center survey in 2009 - 84 years after the Scopes trial - found only a third of Americans accepted evolution. Millions of Americans might harbor vague worries about antibiotic-resistant super bacteria evolving in hospitals, yet they insist that a "supernaturally created", evolution-free universe clocks in at 6,000 years. And it's not as if there isn't ample reading material around, since dozens of popular texts on evolution can be found in any library.

Meanwhile, Americans happily sit down to their laptops and other electronic gadgets and text or blog away, unmindful that quantum mechanics properties reside at the roots of much of the inner functioning. I am referring, of course, to quantum tunnelling! And yet in a different context, they will reject quantum mechanics if it remotely implies or asserts the universe could have manifested via spontaneous self-inception.

In terms of global warming, we've already seen this summer on track to be the hottest ever, with over four straight weeks of 90-plus temperatures in New York City, and multi-day heat waves in much of the rest of the eastern seaboard. Meanwhile, Pakistan is being deluged with over a fifth of the country under water, while vast tracts of Russia are burning from some of the fiercest heat in 130 years. And yet we behold über-Dumpkopfs like Sen. Jim Inhofe of Oklahoma, stating in public we are really in a "cooling period". Reality check anyone?

In his piece, Mooney acknowledges the knowledge gap (more like a chasm) that inundates much of the public, from the topic of Darwinian evolution and the Big Bang (never mind most Americans haven't take even a high school physics course- that they purport to deny it!) to global warming and even the notion that the Earth revolves around the Sun (23% believe the Sun revolves around the Earth!)

Mooney then cites a meeting of the American Academy of Arts & Sciences - which convened workshops on the topic of American backwardness over the past year and a half. He notes that "many of the scientists and other experts who participated concluded that, as much as the public misunderstands science, scientists misunderstand the public".

"In particular, they often fail to realize that a more scientifically informed public will not necessarily more frequently side with scientists. "

He then cites the example of global warming, observing that while debate has "raged for more than a decade" (In fact only amongst the public and pundits, there is NO debate in prefessional scientific organizations that do climate research) the opponents still distort scientific conclusions. While some scientists dismiss this as downright ignorance, other more perceptive ones see it for what it is: that the education of these misfits....errrr....deniers....has been deformed and marginalized by their political outlooks. Thus, the latter trump whatever educational benefits they may have had.

A study published in the April issue of The Proceedings of the National Academy of Sciences found that global-warming skeptics "comprise only 2 percent of the top 50 climate researchers as ranked by expertise (number of climate publications), 3 percent of researchers in the top 100 and 2.5 percent of the top 200.'' This parallels the study-survey by P. T. Doran and M. Kendall-Zimmerman (Eos Transactions, Vol. 90, No. 3, p. 22 ) who found that a full 96.2% of specialists concurred "temperatures have steadily risen and there is no evidence for cooling. Meanwhile, 97.4% concur there is a definite role of humans in global climate change."

So why is so much attention paid to the loudmouth, brash detractors - like Richard Lindzen, S. Fred Singer and others? Think here of the old saw that "the squeaky wheel gets the attention". Well, it applies here! Ideologues rev up the volume on climate warming "alarmists" until two percent overwhelms the 98 percent. Here in capitalist America, to save a little money in the short run (instead of paying 50% gasoline taxes), we're willing to bet our children's potentially hellish future (a three- to seven-foot rise in sea levels, desert temperatures, mass extinctions and widespread drought) on two chances out of a hundred that global warming isn't worth worrying about. No wonder the Europeans look on us with pity, even their laboring classes!

Mooney goes on to also point out that conservatives with higher degrees are still less likely to accept global warming, or evolution, or the Big Bang than their liberal counterparts. But is this really news? We know for a fact, based on a study done some years ago, liberals read more books per year and more weighty tomes than conservos.

In addition, the Goopers are more prone to intellectual subversion via agnotology. Recall in an earlier blog on global warming I noted that the trend of skeptic science sown for political or economic ends - e.g. in imparting ignorance and faux skepticism, depends on a mode of sophisticated, repetitious propaganda and PR that falls under agnotology. It is achieved primarily by sowing the teeniest nugget of doubt in whatever claim is made (and as we know NO scientific theory is free of these 100%, even such rich theories as quantum mechanics and special relativity).

Agnotology is derived from the Greek 'agnosis' and hence the study of culturally constructed ignorance'. It is totally independent of educational level attained, the degrees or experience. Once one bites into the agnotology apple none of his knowledge or education matters. He may be, as Mooney claims, "a much more voracious consumer of the relevant material" but it is all for nought- since the objective isn't to master said material, but to use it to support preconceived specious beliefs.

This isn't suprising. When I gave a difficult astronomy course in determining positions of the planet back in 1978, two astrologers were in attendance. They both had master's degrees, one in economics, the other in biology. I asked them after the class what they hoped to do with the knowledge gained and they replied: "Construct better horological charts!" In other words, mastering or consuming knowledge or education means nada, if one is simply going to pervert it toward spurious ends.

Global warming isn't the only rejected "stepchild" research area of modern science, we know evolution follows close on its heels. In this case, the PR and agnotology is less directed to economic or political ends than religious ones. Never mind all the facts unleashed to prove evolution, such as the chimp and human possessing the exact same cytochrome-c protein sequence. The fundies and their ilk have their eyes glaze over as they point to their ancient texts and squawk: "The Truth is in here!"

No surprise either, that the most backward beliefs are retained in the Bible Belt South - from about Miramar, Fla. to Joplin, MO. We know this cultural chasm was spawned during the Civil War when Confederates - already distrustful of the "damned Yankees" and their "educayshun" - sought refuge in their good book, even as Sherman's cannons bombarded Atlanta and the Johnny Rebs were routed at Gettysburg. To this day, the Southern American holds his bible dear, almost as much as the rifle on the back of his pickup, or the Stars 'n Bars hanging in his living room. And no way in tarnation will any foolish "Yankee atheist" convince him that his grandma "came from monkeys".

Mooney's take has some good points, but it offers too much apologia and rationalization for massive public ignorance. Yes, it is important that we (as any kind of scientific experts in any field) "understand what motivates public concern. At the same time, that "public concern" can't be invoked as an excuse to mount spurious "arguments" and avoid the facts, any more than public concern should be allowed to trump our national security interests, in terms of the Park 51 project (prior blog). (In the latter case, we are really over with as a nation when we permit polls of popularity to trump the rights enshrined in the Constitution).

When a nation fails to process and adhere to priorities, it is but one step - maybe two- from being consigned to history's dustbin.
Posted by Copernicus at 12:50 PM