A Primer on Logical Fallacies: Part One 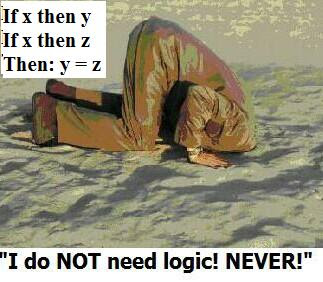 Perhaps the most onerous burden shared by atheists is having to argue or debate people with minimal skills in logic or critical thinking. The first means that we can expect all manner of logical fallacies, flaws, and bogus arguments to be hurled our way. The second means that, rather than a genuine effort at uncovering truth, most of our detractors or critics are invested in promoting their own ideology at our expense. Ask them to consider one single fact, within a logical context, and watch them erupt.

It follows that the atheist can do no better than to stock his armament with all the logical, critical thinking strategies available. The more this is done, the greater the likelihood of fending off attacks. In today’s hostile climate of increasing Christian evangelical hegemony, this can spell the difference between survival and being totally marginalized and rendered a scapegoat.

What I’d like to do is examine each of the main logical fallacies in turn, including examples of how they might be used against an atheist and ways to respond to each. None of this is intended to be complete, or self-sufficient, since there are already a number of excellent books available to help people to navigate the waters of logic and critical thinking.

Of all the fallacies, I think this is the most endemic and pervasive within the U.S. cultural war landscape. This dates from as far back as 1925, when Christian “design” model creationists argued the best “cure for atheism” was the structure and design of the eye. Well, hardly! Since, after all, the eye “sees” optimally at a particular wavelength (~ 5500 Å) of light, precisely because it evolved on a planet with a star whose maximum radiation output is at that wavelength!

What is the logical fallacy of ignotum per ignotius? Basically it translates from the Latin to mean: “seeking to explain the not understood by the less well understood.” In this case, attempting to account for the alleged grandiose “design” of the human eye by appeal to totally unknown constructs (e.g. a supernatural or unknown "designer"). This, after all, would have to be the subtext if the eye’s design is being viewed as “a cure for atheism”. (E.g. the atheist is compelled to surrender evolution via natural selection, since the inherent nonrandom survival features are alleged to be unable to account for the splendid design).

The problem with this line of argument is that it invokes a less well-known or understood mechanism (“the designer”) to account for a structure or organ whose origin may not be fully apprehended at this moment. But who or what is this designer? The proponents of the various forms of creationism (including the now fashionable intelligent design) won’t say, but it doesn’t require an Einstein to infer they are interjecting a supernatural agent. That is, “God.”

The problem is that all intelligent design (ID) has done is to subsume naturalistic evolution's observations then magically assert they are produced by "intelligent design", since no random process could possibly arrive at such intricacy in a billion years. Thus, rather than accept a fairly well understood random process ID’ers opt to nix it in favor of a much less well understood “designer” about whose specifics, attributes they are totally silent.

All they can offer up is canard that: “X, Y or Z structures display irreducible complexity,” hence there must be some unseen intellect working behind the scene to create it! This is pure nonsense as well as a circular argument- but most important commits ignotum per ignotius fallacy.
To paraphrase the philosopher David Hume[1]:

For example, consider the example of the eye again. Is the falsehood of its intelligent design more miraculous than the fact it attempts to establish: that the eye is the product of intelligent design? Arguably no. While the falsehood would leave natural selection as a primary agent, it is (as we saw) in no way is “more miraculous” or incredible than the initial ID proposal! As I noted earlier, by the time natural selection appears, a selection effect in the genome is already solidified. So no "random chance exists", .e.g
http://brane-space.blogspot.com/2010/08/if-youre-going-to-quote-dawkins-do-it.html

In any argument or debate with a religionist, the most anticipated tactic is always the red herring. This tried and true ruse represents an effort to re-direct a debate away from its central issue to a marginal or peripheral one.Example:

“Look at all the crime, the murders and the drugs going on! If it weren’t for atheists we’d have none of these!”

In fact, none of the above are remotely related to, or effects from, atheism. No one has demonstrated, certainly to any degree of competence, even the most cursory correlation between atheism and general crime stats, murder specifically, or drugs. In all likelihood then, they arise from deep societal pathologies, or from lack of social-psychological services, including addiction treatment centers.

However, in the mind of the religious, the atheist is a convenient scapegoat because of his seeming “amorality”. As the embodiment of godlessness, therefore, he is depicted as the weakest link in the chain of social order. Remove the weakest link, and Voila! Society morphs into what it should be: a lawful, decent and orderly structure.

This sort of red herring, while egregious in its own right, also forces the demonization of atheists. We are to be identified as walking, talking moral scourges who inflict a tendency to evil-doing on any vulnerable person in the society. Example from an online 1994 debate about the Rwanda genocide and why God chose not to intervene to save lives.

“What can YOU say for atheism? Why didn’t your great atheism prevent these Rwandan atrocities?”

This is a subtler red herring, since it tries to turn the tables on the atheist by making his non-belief equally accountable for inaction as the omnipotent Christian God. But, in truth, the atheist can’t be accountable or responsible for “preventing genocide” since he’s not the one admitting to worship of or claiming existence for an infinite, all-powerful, all-knowing Being! A Being, given its resume, that ought to be able to do anything, help any innocent anywhere, and then some.

The correct response for the Christian, therefore, is not to impugn atheism for its alleged impotence in preventing genocide, but to admit that s/he doesn’t know why God (as an all-powerful, infinite Being) chose not to intervene. Such specious reasons as “it is not up to humans to fathom the Divine” have been offered from time immemorial, so why not in this instance? Perhaps because the respondent believes (rightly) that it’s hackneyed and trite and might be treated with disdain. But this foresight can’t be used as a justification for a blatant red herring.

Remember again, the most basic form of atheism (the implicit or “weak” form) is the withholding of belief. There is no positive investment in any special, divine entity so there’s no acknowledgement of anything other than a randomly contrived, purposeless cosmos. Humans can’t expect divine intervention into tribal or social aggression, any more than we can expect it into a natural disaster like a tsunami.

At the end of the day, humans inhabit a gigantic, spherical “pinball” machine in which random chance dominates outcome, not any “god” or “divine will”. At any instant any naturally induced calamity can occur, whether hurricane, tsunami or earthquake, and wipe out a mass of humanity. Who gets nailed is totally a matter of the “luck of the draw” at the time, nothing more or less. If, however, a divine being of infinite and all-powerful attributes did exist, the very least we could expect is passive intervention into natural disasters. (E.g. allowing a tornado or other disaster to strike an uninhabited region). This is irrespective of whether it declined to meddle in human “evil” on the basis of some misguided notion of “free will”.

If you’ve ever argued with orthodox Christians, how often have you heard them cite chapter and verse from their Bible? (King James, Revised Standard Version, or other) The tendency has become so predictable it resembles the kind of Pavlovian reflex one observes in dogs when a piece of red meat is dangled before them. They salivate-drool and aren't even aware they're doing it. You start a rational argument with a believer, and within five minutes he’s trotting out the old canard:

“The fool hath said within his heart there is no God!”

If that citation doesn’t work, look for him to go back to his biblical or scriptural grab bag for some other forlorn, antiquated quote, all in an effort to convince you that you, Mr. or Ms. Heathen, are going against two thousand year old authority and God’s holy writ! The favorite quotes, by the way, seem to be all those dealing with “Hell” in the New Testament, or related to the end times and the “Beast” written about in Revelation. All of these, as well as the psychotic personality portrayed in the Old Testament, disclose concepts fashioned by human minds. Martin Foreman hits the nail squarely on the head when he writes[2]:

“No self-respecting human author, far less an all-knowing deity, would suggest (the Bible) is worthy to be considered a holy text”

Catholics at least are somewhat less predictable than Protestants, maybe because Catholics were forbidden to read the Bible for centuries, so didn’t develop the incredible fetishism and obsessive dependence displayed by many evangelical Protestants.(To the unseemly point of idolatry!) No, the Catholics will be sure to toss in various Canon laws, as well as citations from papal encyclicals like Humanae Vitae. In all these cases the argument is from authority, whether based on a papal note or an ancient epistle.

What I like to do is ask my opponent to drop his or her book for a minute and simply argue from straight reason, starting with providing a rational answer to the question:

Why is your faith credible, apart from the existence of any “sacred” texts or personal anecdotes?

Most are unable to do that, at least for any sustained time. Without their Bibles, they're like fish out of water. They can't even form a simple syllogism, far less a coherent argument.

[2] Martin Foreman, “Good News for Atheists- The Bible is NOT the word of God,” reprinted in Freethought Springs, March, 2007 from the series by M. Foreman: If God Existed, He Would be an Atheist.
Posted by Copernicus at 9:05 AM