Another Set of Morons: Opposed to Einstein's Relativity 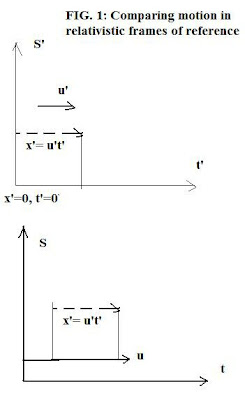 Well, it seems the moron quotient in the country is nearing all time levels. We've already beheld the brainless evangelicals and their ilk - soiling the most nearly complete and demonstrable theories of quantum mechanics, and Darwinian evolution. Now, we find a new site replete with mental vegetables attacking Einstein's theory of relativity. Maybe it is, as MSNBC host Rachel Maddow noted yesterday, a "war on brains". Maybe the bottom line is that this country - well, a lot of it, can't handle brains and is distrustful of them!

Anyway, the site in question for its anti-Relativity BS is known as "Conservapedia" - evidently started by disaffected lamebrains of the conservative mindset, who believe Wikipedia is some kind of liberal conspiracy or plot. Thus, they set up their own definitional tableaux- perhaps hoping there are enough like-minded imbeciles in the country to pursue definitions there. (Btw, so we are clear: I am not a slavish follower of Wikipedia, as I believe while one can go there for a quickly accessible definition, it is also important to consult other, offline, independent sources).

I don't intend to go through all their crap and dreck, just attend to a few of the more outlandish claims. One of them:

"The theory of relativity is a mathematical system that allows no exceptions. It is heavily promoted by liberals who like its encouragement of relativism and its tendency to mislead people in how they view the world."

In fact, it is not a "mathematical system", but two distinct PHYSICAL theories testable in their respective domains. Because the THEORIES of relativity are indispensable to doing good physics (especially in the high energy astrophysics regime) they have nothing - nada to do with political affiliation. Special relativity applies to non-accelerating reference frames, while General Relativity applies to accelerating ones, and is fundamentally a theory of gravitation.

The Principle of Relativity is: All the laws of physics are the same in all inertial reference frames.

This implies "the speed of light has the same value in all inertial reference frames".

Thus- - in no inertial reference frame can any material object exceed the speed of light.

To illustrate relative velocity, first consider an object in a system S' (Fig. 1-top) , which starts moving at the point x' = 0, at the time t' = 0. Assume it moves at constant velocity u' (relative to S') Thus, from the diagram (admittedly not perfect) in the time t' it travels a distance, x'.

Next assume a system S (Fig. 1 -bottom)in which the motion u' = x'/t' is incorporated. We now ask how fast the same object travels according to an observer at rest in the system S? This observer, according to the principle of relativity, will see a velocity given by:

So yes, the same velocity of light is observed. Which comports with the principle.

Now, according to time dilation: All moving clocks run slower relative to an identical clock in a stationary frame.

An excellent example to use by which to demonstrate this time dilation aspect of special relativity, is the muon. Actual experiments disclose that it fully obeys what we expect to observe in the case of time slow-down for a particle approaching the speed of light.

Consider then, the case of a muon formed high in the atmosphere and travelling at 0.99c for a distance of 4.6 km before it decays: e.g.

which is the muon lifetime relative to an observer on Earth.

which is the commonly observed lifetime for muons in their frame of reference.

Using only L, one might suppose the muons would never reach Earth's surface since the path length is too short. But it is precisely time dilation that accounts for the fact a large number DO reach the Earth and are detected.

How much time would elapse on the clocks of Earth observers?

However, the astronauts would disagree -- so how much actual time would elapse on THEIR clocks? And, what would the distance to Proxima Centauri be according to their measurements?

I leave this to industrious readers to work out, and will solve it in the next instalment.

Meanwhile, the other potent evidence for special relativity is by way of the famous mass-energy equivalence relation: E = mc^2. The fact that it fully predicts the energy released in any nuclear fission and fusion reactions, shows the theory of special relativity is in fact, correct. One of the most direct ways to do this is to work out the "binding energy per nucleon" and compare it to that actually observed.

which corresponds to the binding energy actually observed holding the Hg Nucleus together.

Then the binding energy per nucleon is:

Which is also verified. In addition, similar verifications can be performed for the energy given off in any defined nuclear reaction. All of which shows the theory of special relativity is not merely a "mathematical system" but a foundational physical theory with actual observations (e.g. muon lifetimes, paths, and nuclear energies) to back it up. If any critics of relativity, like the yahoos on Conservapedia, don't relish it - then they need to come up with a plausible alternative theory to account for the binding energy of nuclei, the "Q" -energy of nuclear fission reactions, as well as the (otherwise) inexplicable behavior of muons.

One more daffy statement from these morons, concerns their claim that:

Apparently suggesting that Jesus's ability to instantaneously heal a child from a distance implies his healing powers travelled through space faster than the speed of light – and constitutes evidence enough to rule out Einstein's theory.

There are several problems here: First, we don't (assuming we're sane) rule out an otherwise well verified physical theory merely because an ancient book that has been mutilated, mistranslated and imbued with copyist errors (see my previous blog) says so in some passage (which isn't verified anyplace else!) I mean, what measurements were made? Where are they? How far was the child? Do we know whether the reporter was drunk on wine, or anything else? No serious person would justify overturning a theory based on some odd verbal claim minus any empirical measurements, only an idiot would do that.

Second, assuming it is true (case of genuine "quantum entanglement"), one need not knock out special relativity to account for it. Indeed, quantum theory is the one physical theory that actually allows action at a distance, as confirmed in the famous Aspect experiments at the University of Paris. The general layout is sketched in the schematic diagram below:

The above scene captures the instant just before each detector intercepts an atomic magnet from the device. The quantum state observed is described by the spin number, which is (-½ ) for D1 and (+½) for D2, corresponding to the spin down and spin up orientations respectively.

IF such a "miracle" conformed to similar properties and principles as the Aspect experiment, there is no violation of special relativity because a genuine signal propagation hasn't been effected. (This is exactly why the Aspect experiment affords us no practical means to have faster than light communication on Earth, etc.).

Of course, in the Copenhagen Interpretation (the preceding is based on the Stochastic), there is no real or genuine action at a distance even in the Aspect experiment. As author Heinz Pagels has pointed out (The Cosmic Code), the separate polarization records at each analyzer that Aspect used are themselves totally random sequences. Hence, one cannot obtain any useful information except by correlating two sets of records in the manner shown. Hence, no real "nonlocality" or action at a distance. Pagels' exclusion of a 'real nonlocal influence' is also valid on the basis of rejecting definite polarizations before the measurement. This excludes all null measurement techniques. E.g. say we know a polarizer will yield one (or both) of two processes: reflection, r> and transmission, t>. Then: P (U>) = r> + t>.

If then only r> is observed at some detector after interaction with P, it is concluded t> = 0. But only by inference, not actual measurement. Most QM specialists I know regard this as an 'ersatz correlation' - and not truly justified as being interpreted as some non-separability.

Conclusion: Either the gospel record is in error, or made up, or Jesus was a consummate trickster, and managed to perform a remarkable bit of sleight of hand to bamboozle the author of John 4:46-54.

Next: How the morons don't get general relativity.
Posted by Copernicus at 1:42 PM