But for one large asteroid - there'd be NO Humans! 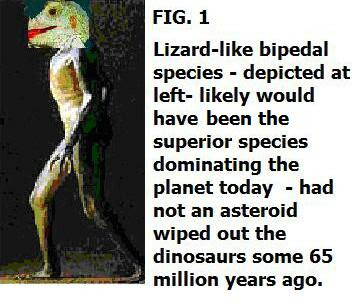 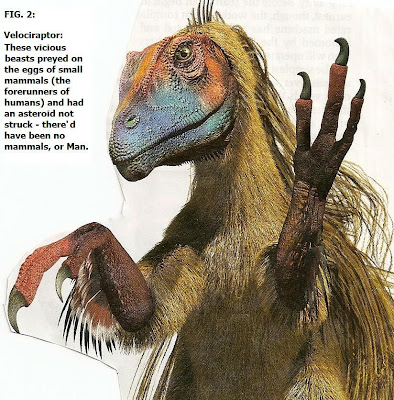 Imagine if no asteroid had struck the Earth 65 million years ago. Many paleontologists can, and what they surmise is that if that cataclysmic encounter hadn't transpired, there'd likely have been no rise of mammals, or apes ....or later hominids including chimps and modern Man. Evolution, dominated by the dinosaurs, might have spun off an intelligent bipedal species such as depicted in Fig. 1. The planet's later biological history might have had a totally different outcome if that monster rock from space not landed in the Gulf of Mexico.

A recent study published in the journal Geology, by Edward Simpson, shows just how close humanity came to not arriving at the scene at all. Of course, at the time - some 70 -80 million years ago, it was the dinosaurs' heyday. Simpson's study discloses small burrows for mammals' eggs, fossilized near Escalante, Utah and which are totally recognizable as the work of small mammals.

A common belief of many paleontologists has been that small quickly moving mammals - the precursors of today's small primates - scampered all about stealing dino eggs for snacks when the dinos were away and hunting. Simpson's work shows just the opposite was true, and the small mammals and their eggs served as many a "midnight snack" for dinosaurs - including the vicious velociraptor shown in Fig. 2.

One burrow found was 22 cm (9") long and 5 cm wide, and included a 15 cm-wide chamber. Of course, given their small size and still insufficient numbers, mammals around at the time had no choice but to dig these burrows for protection - kind of like "bunkers". What amazed Simpson was his other find of signs of digging near the burrow entrances. On closer examination it became clear the claw marks were made by none other than the predator known as Velociraptor.

While the claws of Velociraptor had hitherto been presumed to be used only as weapons against other dinos, or vs. its own fellows (for supremacy) the telltale marks at the burrow entrances show they weren't above going after small prey too, like mammals and their eggs.

Hard as it may be to digest, our prehistoric mammalian ancestors would have been exactly what's for "dinner" and on the menu - their burrows acting as handy snack "trays".

Of course, some critics have proferred other ideas for the burrows, including: scrapes made to mark a given Velociraptor's territory, or a "dust bath" area to get their scales and feathers cleaned much like modern species of birds do today. However, Simpson notes that the burrows are way too deep for either of these explanations to make much sense - so he's standing by his hypothesis.

Dinosaur egg hatcheries also doesn't fit, since as Simpson and other researchers point out these were more or less of consistent size, while the burrows are variable.

In any case, let's be thankful that asteroid did strike when it did, as the iridium present in fossil layers corresponding to that time has shown, thanks to Luis Alvarez and his yeoman work!
Posted by Copernicus at 12:36 PM