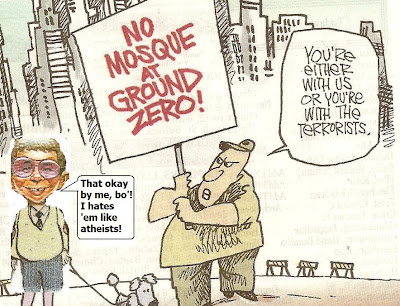 It was only a matter of time before the Park 51 Mosque brouhaha would be invoked as an example of the "clash of civilizations" paradigm first proposed by political scientist Samuel Huntington. For those who may not have heard of it, Huntington's thesis was that the primal conflicts now being waged in our world are not fundamentally those between nation states - but rather between civilizations.

In the case of the terror war shtick, his theme was largely that conflict emerged because the U.S. - as the exponent of Western civilization and values- was seeing its prestige and power decline even as the Muslim sphere exploded demographically throughout the world. In this scenario, all it would take was perceived threats to trigger catastophic encounters - and these did happen, with the U.S. being attacked on its territory in 1993, later in 1998 (with the Cole assault) and subsequently on 9/11 with the Twin towers slaughter.

Of course, the latter was predicted in one form or other well before it actually occurred, and by Chalmers Johnson in his book, Blowback – The Costs and Consequences of American Empire’, Metropolitan Books, 2000. Johnson basically predicted that because of its incursions into Muslim territory and waging warfare there (namely the Gulf War - followed by perceived occupation of "holy lands" in Saudi Arabia by U.S. forces) the U.S. would pay a steep price in terms of a vicious and cataclysmic attack. Lest we forget in the heat of the moment, G. Dumbya Bush - president at the time - was handed a white paper in August, 2001 with the header 'Bin Laden Determined to Attack' - so it wasn't as if it was totally off the radar.

Anyway, the point is that the incursion into the alleged "holy lands" brought the wrath of extremists. And by that I mean, Islamic radical fundamentalists - namely of the Wahabbi sect.
This point is made because I believe Huntington's "clash" paradigm is too far reaching - pitting the WHOLE Islamic world against the West. I do not believe that is the clash we need to be looking at, but rather a "false civilization clash".

Bear in mind, the assumption behind Huntington's version is that the West is the more advanced group and Islam more "archaic" or "primitive" (never mind they first developed algebra long before the West could count ordinal numbers).

So WHO are the real civilizations that are clashing? This may cause some heads to spin like tops, but let's look closely: WHO are creating the most internecine conflicts in both the Islamic world and the West? WHO are the ones responsible for most of the hate, for indulging in over-heated, bombastic rhetoric that continually defeats a global peace consensus? Who are the ones who, back in December of 2009, were featured as the real threats on a CNN documentary hosted by Christiane Amanpour?

The last is a dead giveaway! (Hint: Google 'God's Warriors')

In her CNN documentary, Amanpour had the courage to thread all the culprits into one unifying theme: FUNDAMENTALISM. In other words, the civilization clash is really between modernity-rationalism (wherever it may be found, including in Islamic nations) and the backward forces of fanatical, zealous fundamentalism - whether Islamic, Christian or Jewish.

Readers have already seen with their own eyes the blogs of my Fundamentalist brother- which I've often spotlighted, including my responses, because I believe light shed on venom has an astringent effect: to dilute the venom and expose its source. We have seen him, for example, hold the Pope up to ridicule, defame Jehovah's witnessess and Mormons, as well as have a field day with Eckists, Spiritual Scholars, Science of Mind adherents and many others, not to mention, atheists, often depicting them roasting in his little cartoon Hells. Such is the extremist fundie mind.

I maintain those same intolerant characteristics also pertain and apply to Islamic fundies - such as the ones who plowed jets into the Twin Towers, and the Jewish fundies, who are intent on building their settlements come hell or high water, and are now begging Netanyahu to launch a strike against Iran. (See The Atlantic, Sept., p. 86)

Thus, the civilization we are all arrayed against - anyone who aspires to any level of reason and toleration - is the fundamentalist empire of backward people, all steeped in the claims and dogmas of ancient books thousands of years old and with dubious value. For the Islamic fundies, their mission is to "convert or behead the infidels", while for the Christian fundies it is to "convert or dispatch the infidels into hellfire", or let us say, their putative hellfires - because actual afterlives are not very probable. (And if they are, they are likely afterlives of a residual, nonlocal consciousness associated with deBroglie waves).

True to Amanpour's thesis we must look to fight these zealots and their retrogressive, atavistic inclinations not only on our soil - but theirs.

Now, in terms of the mosque controversy, what we must NOT do is listen to political pyromaniacs (Mike Barnacle's words not mine) like Newt Gingrich who tries to associate "Nazis" with moderate Muslims merely trying to build a civic center on private property as the Constitution provides.

The error of the 9/11 invokers, including the families protesting, is conflating these moderates (who I accept as members of the advanced non-fundie civilization) with Islamic fundies! More importantly, refusing to generously permit the construction is to precisely play into the hands of al Qaeda and the related Islamic fundies whatever their sects. To refuse to condone the construction is to alienate people who could be our advanced civilization allies against those fundies - thereby causing them to align with the zealots and crazies.

In such a close-minded way, we could easily have a clash with the entire Muslim civilization - as opposed to merely its fanatic fundie segment - a conflict we assuredly do not want, nor could we afford! In effect, it is in our own national security interest to swallow whatever pride, and allow the building to go forward without making any more political, cultural or other noise- which plays into the extremists' hands as it discourages moderates. We also need to bear in mind, as Chalmers Johnson put it, that we were not pure as driven snow innocents when 9/11 befell us. We had already interjected massive alien power, warranted or unwarranted, into lands considered sacred by millions. Whether we wish to accept that perspective or not really matters little, it is how THEY perceive it. But the fact remains, it was radical fundie Islamics who struck us, not moderates. But to now condemn all moderates together with all fundies is the full sign of lunacy and a nation that has lost sight of its values to demagogues like Gingrich.

As The Financial Times put it in today's editorial:

"Any chance to strengthen moderates, such as Abdul Faisal Rauf, the imam behind Park 51, is worth seizing.

The opposite is achieved by hysterical claims that an Islamic Centre near Ground Zero would be a victory for terrorists. Conflating moderate Islam and al Qaeda's extremism demonises peaceful Muslims and plays into the hands of those who claim the West is the implacable enemy of Islam".

Anything we can do, to isolate the Islamic fundies from the moderate Islamics and gain the latter to our cause is worth fighting for. The opposite is too horrific to contemplate!
Posted by Copernicus at 2:41 PM

The Cordoba House controversy, in my opinion, is about creating a distraction. The American public is dealing with economic problems, a nasty oil spill, and two overseas wars, and what better way to distract them than by lashing out at a scapegoat?

It frustrates me that right-wing commentators assume that the people behind Cordoba House are extremists. Something similar is happening with an Islamic community center in Tennessee. The levels of bigotry are disturbing.