The Problem of Evangelical Psychological Terrorism 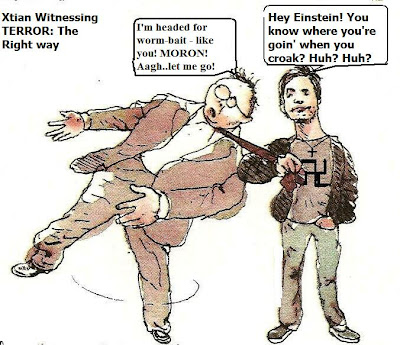 It was author Alan Watts, I believe, in his short but insightful book, The Wisdom Of Uncertainty, who pointed out that only very insecure religions or people have the need to launch themselves into the public domain and proselytize for "converts" - as opposed to keeping their religion to themselves. The very act of doing this demonstrates an enormous amount of hubris as well as arrogance, since those who do it have arrogated to themselves absolute knowledge - which NO ONE can have- concerning what transpires after death. Oh, they will cite chapter and verse of their bibles as some kind of "proof" they know the whys and wherefores, but as Watts notes - anyone who has to commit the fallacy of "appeal to authority" to try and win over the minds of others, has already lost.

My interest in what the fundies call "witnessing" (what I call psychological terror) goes back to 1972, when a student of mine was so traumatized by an over eager Pentacostal proselytizer (who showed her colored images of "souls" burning in Hell with their eyeballs melting) that she had to be committed to Barbados lone mental institution for over a year. Reduced to a diet of largatyl and intermittent electro-convulsive therapy, she was barely able to form a syllable and many of the staff wondered if she'd ever recover. (She eventually did, with the support and help of family and friends)

From then, I vowed to formulate response programs in my spare time to ward off these noisome pests, as well as develop arguments to neutralize their crap when and where it emerged (mostly on busy city streets, where they are trained to do "hit and runs" - dropping flyers into your midst that you don't want and have no interest in. Or, they come to your home, knocking on the door to try to "save" you.

While in this country we do have to have some latitude for allowing "freedom of speech" - BUT we don't have to tolerate pests, unless we want to- or maybe hope to garner some entertainment. And then, one of our objectives must be to try to mount an intellectual attack on their own stupidity and arrogance, and show them that "witnessing" is pathetic and unbecoming of anything more than a zombie. It's merely a ruse to try to validate or reinforce their own shaky faith. (Though they will insist their beliefs or bibles - citing some later added passage- demand that they do so, which is bare bollocks. As I noted this is all a result of Paul commandeering a humble Jewish offshoot to mutate it into a world dominating force)

Usually when witnessers have approached me- in a Mall or some other public place (they've even tried at a public library once!), they ask of one of several inane questions, each of which can easily be exposed for the rubbish it is. A possible illustration of an exchange might go like this:

Evang: "Do you know where you're going when you die?"

Me: Sure. No place, no where! When you're dead, that's it. Death is merely a natural process by which evolution can replace members of species, and ultimately whole species, with newer more adaptable ones."

Evang. "So, you don't believe in God? In the Lord Jesus Christ?"

Me: Whoa! Back up there? Which God? How defined? Do you know or can you tell me the necessary and sufficient conditions for its existence?"

Evang. "Huh! God is all around you, just look!"

Evang. "The Sun, Moon and stars, the grass outside, the trees, the plants and also the planets!"

Me: Those are all natural byproducts of natural, physical processes and outcomes which can be easily accounted for by physics, or by biological evolution!

Now, how about those necessary and sufficient conditions? If you can't even articulate those, then it's clear you're not sure what you're talking about!

Evang. "The God of the Bible!"

Me: Okay, so give me the n-s conditions for it to exist!

Evang. "I don't know what those are!"

Me: A necessary condition is that which if it isn't in place, the entity can't exist. The sufficient condition is such that if it is in place the entity must exist. Now....go ahead.

Me: Oh, most historical evidence rational people can agree on does show there likely (90% probability) was a man who lived at the time, a Jewish rabbi who went by the name Yeshua, but he wasn't a God-man. He was just an extraordinary teacher - who taught others by his example of common eating and healing. He would have been thought or considered a hippie today.

Me: Nope. You can read all about his basis as an itinerant Jewish peasant rabbi in Dominic Crossan's great monograph, 'The Historical Jesus - the Life of a Mediterranean Jewish Peasant'.

Evang.: "So you're not afraid of going to Hell?"

Me: Hell doesn't exist. It was a figment of some ancient, primitive vicious mind that was given some ephemeral form in various art, but isn't real. It can't be because it's logically inconsistent with any type of God postulated as infinite. You postulate God as infinite, do you not?

Evang. "Yes, well,....of course. But what does that have to do with Hell existing or not?"


Me: If something is infinite, do you agree that its extent must be maximal. All over, everywhere? Without bounds, in other words? No limits?

Evang. "Yes, of course...infinite....the most there can be and no room for anything else".

Me: Okay. But consider: IF there were a Hell, it would mean something exists outside of and apart from God, no?

Me: Then, logically, if there were a Hell, and it existed outside of and apart from God - then there would have to be some place God is not, right?

Evang. "I see where you're going with this, but I don't like it!"

Me: No one says you have to. All I'm trying to do is to get you to put down your damned book and think with the brain God supposedly gave you! Now, my conclusion is what?

Evang. "Forget about it! I hope you know what you're doing and that if you make the wonrg bet on Pascal's wager it won't be very nice for you!"

Me: Well, I guess I will take my chances then. At least until you can work to the conclusion I set up for you, regarding no Hell able to co-exist with any infinite God! G'bye! Oh, and don't let that door hit you in the ass on the way out!

My point here is that most evangelicals will high tail it when you force them to confront their claims with logic. And one good thing regarding this type of exchange, it removes them from the comfort zone of their computers - where they now have to stand off against an actual human and argue, really debate...as opposed to making it up as they go along- for example this howler blog post ('Y'All have been WARNED!):
http://pastorstahl.blogspot.com/
Yeah, right! Maybe he needs largatyl and ECT?
Posted by Copernicus at 10:01 AM