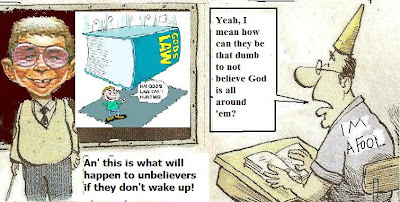 It never ceases to amaze how the fundagelicals- despite no demonstrable presence of any deity operating or acting in the world, continue to refer to atheists as “the Fools”. Seems to me that people who have imaginary, invisible friends and believe in ancient tales – like a guy living three days in a biological vat of hydrochloric acid and coming out alive- are the fools. But they're all so righteous they endlessly deny their nonsense, and accuse us of being the ones blinded.

Let’s look at some recent nonsense spouted on an evangelical site about “God’s laws” and “revealing himself’. The fundie writes:

“If God accepted the challenge of always having to prove His existence , what would it take ? Would it have been necessary for Him to personally appear to and perform miracles to every human being ever born ? But even that might not be enough to satisfy everyone . “


Actually, the fundie is somewhat confused. But let's assist him in gaining some mental traction. It is not the "job" or "challenge" of a claimed existent to "prove its own existence" - but the claimant's to do so. That's like some believer in the flying spaghetti monster to demand it prove itself! (Or make excuses on its behalf for not doing so!) Maybe it doesn't want to, for whatever reason. Maybe it's more comfortable in the shadows. But then flying spaghetti monster believers don't make outlandish claims for their entity's attributes like the God believers do theirs. Like saying it's "all good and all powerful" and "omnipresent" - but can't even life a finger to help those who depend on ro call upon it.


Secondly, if the entity did independently exist apart from fundie imaginations, and it had a mind to demonstrate itself, no rational person - certainly atheist- would demand so immense or multifaceted a threshold as separate proof per person. Most of us would suggest merely disclosing its presence to the extent that there is an actionable force for good in the world capable of thwarting evil – at least most of the time, if not all of the time. For example, those 10 medical aid workers recently slain in Afghanistan. All purportedly doing “God’s work” in providing Afghans with medical aid, and all irreplaceable in terms of their skills and dedication.

WHY couldn’t an infinitely powerful and GOOD deity (so claimed) have allowed even half to have escaped somehow instead of all being slaughtered? Did it not recognize or care that by allowing the deaths of all, any impetus for good in that part of the world would be reduced, exactly where it was most needed? You had there people, interns, a dentist and pathologist, others - totally dedicated to helping poor Afghans in Nuristan province. Yet they were all allowed to be slain on the spot. Does a GOOD God allow such a vicious thing to happen to those doing HIS (claimed) work in the world? Come on now, let's get real! Either it is an Evil God who could act (being all powerful and omnipresent) but chooses not to, or there is NO God at all.

But the fundies, instead of dealing with this massive inconsistency in their God’s claimed attributes – employ intelligence-insulting rationalizations and throwaways like ‘we can’t know God’s will” or "God allows men free will to enact good or evil". Or to frame it more honestly, "God permits the free will of evil doers to triumph over the free will of his good followers". (All those killed were part of a Christian mission, btw).

Thus, the fundies are content to hide their heads in the sand and avoid the plurality of evil in the world, while they mock atheists as fools. Well, hey, at least the atheists don't invest all their energy in invisible Beings! (And these jokers also have the nerve to mock us for insisting in a high probability of advanced extraterrestrials, even as they embrace absolute nonsense and gibberish - like a guy living in a whale's belly for 3 days, saturated in hydrochloric acid and still emerging in one piece!)

He then goes on to write:


“Instead , God long ago decided to provide solid evidence - in the form of His handiwork , human testimony and fulfilled prophecy - that He is the living , intelligent Creator of the universe . This evidence is compelling and powerful to those with an ear to hear and an eye to see . But everyone has a choice . He can face the evidence or scoff at it .”

But this is retarded nonsense, or something I’d expect from a ten year old, not a responsible and purportedly adult blog operator. Citing “handiwork” is not solid evidence, nor is writing blather like "This evidence is compelling and powerful to those with an ear to hear and an eye to see. " To see WHAT? WHERE? What about DARK ENERGY? How is THAT any compelling evidence for an "Intelligent Creator"? You can't just make bare bones claims with nothing else! One can’t simply point to galaxies, solar systems, and stars and insist they are "divine handiwork" but convieniently omit dark matter and dark energy (which together comprise 93% of the universe)! One must show HOW they ALL (in toto) are uniquely created by a divine entity instead of arising from natural, physical causes – agents. The fundies never do this - maybe because they don't know how to give the necessary and sufficient conditions for their god's existence in the first place! Or, maybe they simply don't have the brains to counter physics' principles, so steeped are they in supernatural horse shit.

"Human testimony" also can’t be trusted, since it’s subjective, and in any case, the fundies again act in contradictory fashion. They refuse to accept any human testimony concerning the possible existence or historical interaction with extraterrestrials – whether in the form of actual “Close encounters of the third kind” or possible abductions- but willingly accept and assent to any human testimony wherein the claimants were visited by some spirit, or Jesus or whatever – despite the fact it has been shown these arise in the temporal lobes. (As shown by the experiments conducted by Michael Persinger, see, e.g. his 'The Neuropsychological Bases of God Beliefs')

At the very least, the minimum, the evangelicals need to be consistent in their acceptance standards: if they allow for "human testimony" in their fantastical accounts of invisible interaction with spirit beings, they also need to allow for it in claims by UFO abductees or even those who claim to have received radiation burns from coming too close to an alien device or ship (See Prof. J. Allen Hynek's book, The UFO Experience). If they only accept human testimony in one sphere, but not the other, then they are guilty of committing selection bias and that source can't be trusted.

As for “prophecy” – these are always claimed fulfilled in hindsight, as can be shown merely from reading scriptures with a judicious eye. Moreoever, prophecies in the Bible are all so ambiguous and overladen by antiquated idiom, it's impossible to show how they have manifest or come true. We also know that the claims for Yeshua "fulfilling prophecies" were actually a result of Yeshua already knowing what those earlier Jewish forecasts were, then saying the words or intimating the actions to make it appear as if they were completed or fulflled by him.

In the case of apocalyptic prophecies, such as in Daniel and Revelation, we already know several evangelicals who've gotten themselves in trouble by attempting to project their subjctive interpretations into the future. For example, Hal Lindsey in his "Late, Great Planet Earth", actually used Daniel and the Book of Revelation to make a whole series of insipid claims (in retrospect). One of these was that the "ten-headed Beast" in Revelation was the (then) European Union. (Lindsey like many fundies believed the Antichrist would arise from the Old Roman Empire). Well, by the time the EU approached 20 members Lindsey realized he was far off base, and in fact, realized it earlier when the Tribulation didn't commence in 1988 (40 years or "one generation" after the birth of Israel (the "Fig tree") in 1948). Up to now, indeed, we've seen or heard no signs of any "antichrist" thought the fundies are as eager as ever to see some of the "prophecies" fulfilled such as the rebuilding of the Temple in Jerusalem. Will it ever happen? Who knows?

The problem with all these prophecies is the fundies try to have it both ways. They cite this or that event will happen, according to x, y or z prophesied in this or that Book, but they refuse to allocate specific dates - always finding excuses to punk out (it is not ours to know the hour or the time of the End etc.) Thus, by never appending dates they keep their so-called predictions open-ended. In science, if such open criteria on predictions were allowed, most theories would never be rejected or falsified. But the fundies get away with it because they're in the snake oil.....errrr....religion business!

Another trick or ruse they employ, is to cite any current manifestations of natural calamities - like the recent earthquakes in Haiti, Chile and China....to claim these are "signs" of the last days. Never informing their clueless followers that a certain average frequency of Earthquakes are expected every day given the Earth's crust is composed of tectonic plates that shift and impact each other. (Seems the "Great Designer" was unable to design a planet without such plates, which wouldn't kill over 250,,000 at once! But the fundie idiots expect us to believe their codswallop about "handiwork". Hey, Fundies, what about Dark Energy? Is that Handiwork too? How so, if we can't assess it for any order???)

In the end, the fundies -evangelicals have nothing to support their dreck. Their pretentious world of "law" is based on subjective fictions, pseudo-evidence and faith masquerading as knowledge. If they had one ounce of honesty, far less intellect, they'd realize THEY are the fools. But as P.T. Barnum once put it: "There's a sucker born every minute". At least novelist Anne Rice now recognizes that Christianity is a big game for the religious suckers, and she's finally quit it.
Posted by Copernicus at 9:00 AM