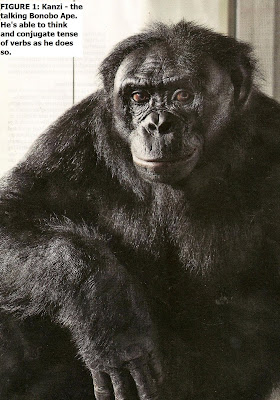 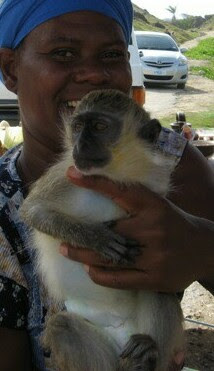 Left: Carlo, the Math Monkey in Barbados, just before toting up the cost of the goods.

Well, we do know the biblical literalists, other black and white thinkers and their hangers on will go bananas, but it's about time we extend their limited purview of natural reality. To that end, I want to discuss in this blog the remarkable domain of communicative monkeys and apes - especially our cousins the talking apes of the bonobo clan.

One wonders why it's so hard for intellectual "black-white"paradigm folks to wrap their minds around talking or communicative primates or monkeys. Is it a conceptual mental block- or perhaps a biblical one instilled in their minds that absolutely no creature on Earth other than Man can communicate or reason.

Even philosopher Rene Descartes, who conceived of res cogitans (thinking thing) and res extensa (non-thinking thing) fell into the human thought chauvinism trap, observing once: "The reason animals do not speak as we do is not that they lack the organs, but that they have no thoughts"

For many biblical literalists, their brains trapped in the antiquated pages of a book most sensible folks now regard as fiction, the trap is laid when they read that human beings are granted "dominion over the beasts of the field". Talk about stoking human hubris!

The fact is that many animals display a range of behaviors that once were assumed to be exclusive to humans. The difference is that now we are actually observing thousands and thousands of species in ways we never did before (including using closed circuit or remote miniature cameras). Thus we now have discovered (after more than 13 years of documented recorded evidence on tape) that elephants conduct their own memorials for their dead, including rituals. Meanwhile, similar observations have shown that chimps and many other animals actually make tools, and the chimps even use stone hammer tools and tree clubs to wage war on other chimps!

Meanwhile, a UK study last month proved that pigs raised in comfortable and hospitable environments (just enough light and space, plenty of food, water) exhibit optimism - and when a stimulus is introduced they will tend to move toward it to investigate, rather than cower.

Language is a whole other domain. Most have heard the story of the gorilla Koko, but few perhaps have heard of the remarkable Bonobo ape, a relative of the chimp. One particular member of this species, Kanzi, has a working vocabulary that would put most humans to shame! (See photo). While Kanzi is able to "speak" - form crudely some of the words in his 400 + word vocabulary- he communicates mostly via his computer keyboard. He types in FULL words and full sentence reponses.

On one occasion one of his trainers asked him aloud: "Are you ready to play, Kanzi?" And the ape smirked and responded with his keyboard: "PAST ready!"

This response exudes both wry humor and intimate knowledge of the language. The fact the ape added "past" to prefix "ready", shows he's not above some mild snark. So, he's been waiting long enough and wants the dumb, slow human to get on with it! And further, he wants the human to know it!

Kanzi's communicative talents extend way beyond the keyboard. With his gestures combined with other suymbolic representations he has, he's been able to form full thoughts, as well as express their manifestations in time as he builds new sentences and conjugates his verbs better than many humans. Meanwhile, at The Great Ape Trust, Kanzi's son Teco is also getting into the swing of it - learning the language taught to Kanzi.

Meanwhile, in Barbados, West Indies - on its East Coast, we have Carlo "the mathematical monkey". We encountered Carlo while headed to the Atlantis Restaurant during our recent trip there, and stopped to take some photos of him, and buy some baubles. As each bauble was counted, Carlo added the new totals on his small chalk board then handed it to his mistress. She then took the money and processed change. I wanted to test Carlo's proficiency using an algebraic equation of the form: 3 + x = 7, to write on his board then let him hold up fingers to display the value of x, but his mistress required another $10 to pursue that. Exactly what I was saving for the Atlantis tip (and they don't accept credit cards).

The bottom line is that animal communication is not some oddball freak show thing. It points to actual potentialities of other creatures living amidst us. My suggestion would be to definitely learn to communicate with these co-existing fauna on our own planet, before we proceed much further trying to communicate with beings on distant planets.
Posted by Copernicus at 12:18 PM