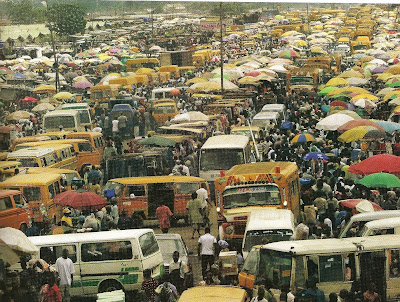 Above: A section of Lagos, Nigeria today. But perhaps a possible view of East LA, in 2060, if we don't control our numbers!
The Dismal Theorem:

"If the only ultimate check on the growth of population is misery, then the population will grow until it is miserable enough to stop its growth"

Well, if Wapo drone Robert J. Samuelson has his way, based on his latest drivel ('Tax Laws Should Favor Families') we will be testing the Dismal Theorem very soon. In his piece, Samuelson wrings his hands about the prospect of the U.S. of A. falling into the near zero population growth dynamic of Western Europe, as he whines:

But....last time I checked the stats, Germany - with its strong trade union tradition and democratic socialism, was running rings around almost every other nation, including the U.S. Meanwhile, Samuelson wants the U.S. to pursue an already disproven economic canard: that higher growth, including population, spurs economic growth and pays for itself.

To that end he argues that "current budget policies punish parents, who are taxed heavily to support the elderly. Meanwhile, tax breaks for children are modest."

This is utter rubbish! Last I checked, my brother in Florida with two kids is garnering a yearly tax break of $2,000 ($1,000 for each child) that I can't partake of ....with no kids. Further, he will within a relatively short span of time (about 10 yrs.) soon be partaking of Social Security himself. The point omitted by Samuelson is that those same parents who "support the elderly" today, will in turn be supported tomorrow. Thus, his implication that they are hanging out there on a limb is nonsense.

Further to the fact, it may interest people to know that most of their current taxes, rather than going to support the "elderly" are actually going to support military adventures whose total cost may run over $7 trillion by the time they are finished (according to the authors of "The $3 Trillion War'). It is these wars, as well as other lopsided military expenditures that are ruining this nation, catapulting it into a morass of debt and deficits that future generations will have to pay back to (mainly) Chinese Bankers.

In his spot-on column in TIME ('Never Again') Joe Klein put it best in terms of the costs of the military follies launched since 2001:

"The essential principle is immutable: We should never go to war unless we have been attacked or are under direct, immediate threat of attack. Never. And never again!"

Let's also bear in mind it wasn't Afghans that launched the 9/11 attacks but 19 SAUDIS! And now I read in today's WSJ about a plan to sell them F-15s. Am I missing something here or what? Oh right, the need for oil translates into strange bedfellows.

Anyway, back to Samuelson's lamebrain bunkum. He moans at the current U.S. birth rate of 2.1 children per woman ("still not quite at dismal levels"), but seems oblivious to what more would translate into. For one thing, much more surplus labor. Many more competing for jobs in an evolving market in which companies no longer want to hire humans, period. Why do you think those self-service lines at the supermarkets are being increased in number? They are the means by which even those companies can prove they no longer need even check out clerks! As for the massive automation going on elsewhere, believe it or not that's where most companies have been spending their $868 billion in pent up "booty". It sure as hell isn't in creating jobs!

As it is, job creation is behind the pace of increased population by about a factor five. That means, at the rate of current population increase, the rate of jobs creation is five times less- and we aren't even remotely getting to the stage of going beyond and replacing all the eleven million or so jobs lost since 2008. So what is Samuelson's brilliant solution? To add more numbers to the job pool and thus increase the number of unemployed!

But never fear! The way the BLS games and jiggers the unemployment stats, we will be down to about 6.5% just by 2014- merely from jobless attrition - at the rate they're cutting unemployed workers from the rolls (After six months they're conveniently relabeled "discouraged").

Surplus labor via overpopulation is also terrible in so many other ways. It creates an enormous pool of unemployed who get so desperate, they will literally work for any kind of pay, and do almost anything. This creates terrific pressure on workers to compete for a dwindling pool of halfway decent jobs, even as companies-employers are getting wet dreams. They can now afford to drop their salary and benefit levels and still get all the workers they want. Hell, if ten people don't like it and want to quit, there are fifty ready to take their place - and if Samuelson gets his way, probably over a hundred! Cheap labor anyone? Well, the greater the surplus labor pool, the cheaper the labor becomes - I can guarantee you that!

Evidently Samuelson, like another pro-birth nimrod before him (Ben Wattenberg in his dopey manifesto, The Birth Dearth) also hasn't processed the other problems attendent on his dumb solution. For one thing all those added births will translate into an even more congested and gnarly landscape. Clogged highways, more CO2 befouling the air, congested ERs - bad already even as hundreds of hospitals are closing them across the nation, and crowded schools in which quality of education is inversely proportional to the class sizes (as all of us who've ever taught are well aware).

Then the taxes Samuelson fears may come about anyway, since obviously taxes and utility costs must escalate to pay for the added growth. The other alternative is to do like many cities, and cut public services (including teachers, firemen and police) and turn out street lights - like in Colorado Springs- and let the chips fall where they may so as to refrain from tax hikes. Oh, and shuttering all the community centers and basketball courts where the kids may go to play after school or during the summer.

Samuelson is talking bollocks on the effect of "high taxes" anyway. Maybe he really needs to read James Medoff and Andrew Harless, The Indebted Society, 1995, specifically the chapter commencing on p. 84, 'Let Them Eat Cake'. In their analysis, Medoff and Harless found (p. 87) that "high tax rates are associated with higher productivity growth" There is a consistent and strong relationship. By contrast, for the years when supply side dogma held, productivity retreated by more than 30% and debt exploded- exactly the opposite of what we've been sold.

Contrary to the supply side bunkum - which must include having more children as a proposed means of increasing "producers" - it doesn't work. Those new born (would be, wannabe)producers - also become consumers- and they may never get jobs, but they will still consume. In our new, overly populated tableaux, that means one of two things: Many more people will each have to consume much less each. Or many more people will die (of famine, disease, etc.- the "Population Crash" predicted by Isaac Asimov and Prof. Albert Bartlett) so that the survivors can consume the same or less. That means less food, less oil, less space....less of everything.

No wonder many such as Prof. Al Bartlett have warned that democracy cannot survive overpopulation, neither can human dignity. If you dispute it, look at the photo above from an issue of The Reporter - the magazine of Zero Population Growth, now called "Population Connection". The photo depicts a section of Lagos, Nigeria, but it could also be an American city- maybe East LA, ca. 2060 if we soon don't get a handle on our numbers, and cease falling for the pseudo-economic snake oil to promote population growth - peddled by Samuelson and his fellow growth promoters.

The most ironic aspect of Samuelson's piece is that he himself unwittingly makes the case for limiting numbers to sustainable levels, noting that the current cost to raise one kid up TO college is $286,000. For two kids, nearly double. To get them both through four years of college, unless they get scholarships, you're looking at over $790,000 - assuming they can't get full loans.

Now, given those costs, and the fact that jobs are being literally extirpated as I write this - either automated or dispatched to low wage enclaves in India, or China- consider the chances of being able to AFFORD having even one kid! To add the coup -de-grace to my argument, Samuelson admits himself that a full 40% of all the births making up that 2.1 per woman now are from unmarried mothers - with offspring destined to live in poverty.

Of course, he won't risk outraging some of his conservative fan base by suggesting it would help to teach young women to learn how to use birth control (or to get their boyfriends to, before engaging in sex). Oh no, not that for us - we in the U.S. of A. continue in the fine old Puritan (ostrich in the sand) tradition of ordering Nellie Belle and Rita Sue to practice "abstinence" - the ultimate magic bullet. Yeah right, in Fantasyland or Peter Pan land, where hormones never overrun young kids with desires!

Of course, Samuelson may also not have suggested that prescription of artificial birth control because it would engender cognitive dissonance in some readers- since he's already pandering and pleading for MORE children, not less!

Here's where it stands right now: we can have a choice of two dramatically different worlds that can support EITHER a lot of us consuming a lot less, OR far fewer of us consuming more. We can't have both (yep - this falls into the either-or paradigm but alas, it applies here!), and the Borlaug Green Revolution is already on the way out. Plus, heat and drought in Russia have now shown us what the future looks like when we sit on our asses and don't act to halt or mitigate global warming. Right now, the Russian wheat crop looks like it will be a failure, and they have ordered all export shipments halted - meaning billions around the world won't get. At the same time, China's own wheat crop failures from droughts have made them now a net importer of U.S. wheat - from a net exporter (of nearly 15 million tons) in 2006.

The solution of deliberately increasing human numbers by Samuelson and his deluded cronies simply doesn't work. It merely adds fuel to the fire by adding millions more per year in (unabsorbable) surplus labor burdens, pollution burdens, traffic burdens, food -crop burdens (in a drought prone world) and service (e.g. health care) provision burdens - not to mention drags on the existing quality of life for living humans - by doing nothing to change the situation to the positive. What we need instead is a radical turn to the Index of Sustainable Growth, as proposed by Eco-economist Herman Daly. We need to learn to live within environmental capacity limits - especially as that environment, once a climate catastrophe strikes, can instantly convert projected food bounty into massive food shortages - leading to the food riots we saw in 2007, or worse.

Rather than adding tax credits as Samuelson idiotically proposes, we need to increase taxes (on each child) to make sure couples add no more to either the planet's limited and finite support capacity or to strain their own financial limits. If nothing else, we need to do it for their own good, as well as ours.
Posted by Copernicus at 2:28 PM