WHY I HATE MOST RELIGIONS 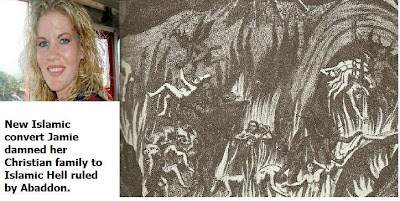 In the past week, and in the days following the news about Jamie Paulin-Ramirez - a 31 –year old Leadville, Colorado mom who converted to Islam- the despicable nature of religion as a divisive force has once more come to light. Evidently, before setting out for Ireland to recruit “jihadists” (a la ‘Jihad Jane’) to eliminate a Danish cartoonist (who had drawn Mohammed as part dog) – the background on Paulin came to light compliments of her mom, Christine Mott. (With whom she lived with her stepfather).

Extensive Denver Post interviews with both Paulin-Ramirez’s mom and stepfather confirmed that before she packed up and left (taking her son- renamed "Wahid") there had been ferocious arguments in the house between the newly converted Islamic and her conventional Christian parents. The new convert went so far as to leave notes around threatening both with “damnation to Hell” – the usual playing card of loser extremists who have exhausted reason to make their case. They know their persuasive ability is limited, since they lack the educational and logical basis- so have to hurl threats at friends and family: “Convert to MY beliefs OR ELSE!”

The constant threats, including verbal, got so bad that Jamie’s parents and brother were totally unable to even talk with her or to her. She was in “another world” – probably the Muslim “Heaven” promised to all fervent believers in Allah. Thus, as her mom told the Post – every discussion turned into a screaming match. Even as she tried to convince the young woman to return home (on a phone call to Ireland) a screaming match erupted with – again- the mother being “damned”.

After reading these accounts, then those about the Ugandan government ready to pass laws (at the behest of evangelicals) to execute gays, and the news that a Congressman named “Stupid” ….errr…. Stupak…..was prepared torpedo the health reform bill because the abortion wording was removed- my livid hate for most religion was kindled anew. Destroy, divide, kill, and undermine – those who don’t believe exactly as you do, and create murderous rages and insane ideations, all for holier-than-thou sanctimony and some pie in the sky promise of an afterlife that is pure poppycock. And on the specious basis of that poppycock will lunatics go so far as to fly planes into buildings to kill thousands, or set off bombs in hotels, or threaten elected officials with “Hell” if they don’t vote for a law or execute a policy – against abortion.

It gets truly sickening. It enrages me no end, as I see family after family ripped asunder by lunatic teachings and the ravings of maniacs who posture sanctimony, holiness, and “helping” others (e.g. “saving” them) but are in fact promoting hatred in the guise of God, and division based on egotistical self-righteousness. These maniacal believers – like Paulin-Ramirez, really think they have the total handle on truth and reality and are prepared to ram their pet version down everyone’s throat – not stopping to consider they don’t know jack.

If these idiots paused a second, they’d understand how stupid and arrogant their beliefs are, and how replete with deficiency and foolishness their bibles (or other revelatory works). For example, given there are more than 1100 religions (including sect offshoots, e.g. evangelicals and charismatics from Protestantism) it is clear to the most utter imbecile that ALL can’t be right. Nor can all their teachings, doctrines be right. (and we already know all their scriptures can’t be, given they collide with each other.)

The problem is: How does anyone assess which is correct? The Roman Catholic Church has asserted its primacy as the original “true” religion in perpetuity since the time of Peter. If any religion has a claim on “the one true religion” - it does, simply given it’s existed from the Year Dot. None of the others have, they’ve all spun off from the RCs whether they want to admit it or not. On the basis of this primacy and seniority, the RC religion proclaims itself the “one true faith” and ordains that all who know of it (yet reject it ) are condemned to Hell. (Though the RC Hell has been modified in recent years so it is no longer taken literally as the kindergartenish “lake of fire” spewed by wannabe Elmer Gantry types – but of permanent isolation from the Beatific Vision and Presence. But even this version suffers from a major defect in logic that I’ve often pointed out: IF God is really infinite – meaning literally OMNIPRESENT – then it can no more be “isolated” from itself, than burn itself. In other words, all beings, parts and partitions must ultimately be unified into One reality. If a separate part is “unsaved” or in “Hell” then God is not infinite since cannot exist in those ‘unsaved” or Hell regions! Not one Christian to whom I’ve presented this logical conundrum has been able to refute it. Go figure! Perhaps it's easier to invoke "Hell" than to use their gray matter.)

Islam has existed almost as long and like the RCs evinces a jealous, uncompromising deity – Allah – and a parochial belief system that doesn’t tolerate “infidels”. By “infidel” the Islamic doesn’t mean simply an atheist (pure and total unbeliever) but ANYONE of another religion. All Christians, Jews, Buddhists, Hindus et al are condemned to the Islamic Hell just like ordinary atheists. Thus, did Jamie Paulin have no qualms – not one – about consigning her mom to eternal fires, since her religion conferred its benediction on this.

As far as Protestants, many of them (e.g. Anglicans) have finally evolved to a more benign state where they don’t exercise the odious spiritual apartheid of the RCs and Islam. They don’t invade nations to force higher birth rates to overtake all other faiths. The lone exception to this are the clique of biblical literalists, who absolutely are convinced their bible gives them primacy in the race for the “true religion” and that a simple formula: “believing on the Lord Jesus Christ as personal Savior” – delivers them from that “lake of fire”. Unlike the Anglicans- Episcopalians and Unitarians, the biblical literalist lot aren’t sufficiently educated to know that: a) the bible isn’t one book but 66 written over a 1,000-year interval and full of mis- translations, and outright false translations, and b) Jesus Christ as a divine entity never existed. There was only a HUMAN rabbi that some called Yeshua – but he wasn’t divine, didn’t perform miracles and could no more “save” another human than that human could himself.

But because simplicity appeals to simple minds, and at least one New Testament citation (John 3: 16) gave it gravitas, nothing else mattered. There was the magic ticket to salvation, it was via Jaysus, and damned to Hell (literally) anyone who clamed differently.

Thus have evangelicals become as loud, brash and arrogant – hurling judgment every and anywhere- as their RC and Islamic counterparts. It never occurs to these numskulls either, that THEY are the ones condemned by the other two – who existed long before their did (or their KJV, confabulated from one of the most corrupted 12th century manuscripts ever). Thus, if one follows the line of logic: if ALL the major Hell-breathing religions see their respective judgments fulfilled then ALL the MEMBERS of these religions will end up in each other’s Hells. The $64 question they want to gamble on is based on the degree to which each is firmly convinced HE (or SHE) won’t go to the other one’s Hell, but THEY (other members of other religions) will go to HIS God’s version. Stupid!

So, on that fragile and tentative John: 3:16 basis of pseudo-truth (plus blindly citing references to Hell that were never in the original maunscripts - e.g. Qumran scrolls) have the cocky evangelicals ostracized their own from their own, not thinking of what they are doing. Believing in their delusions they are trying to “save their family” just as fervently as Jamie Paulin believed that by hurling invective and damnation at her mom and stepfather she was trying to save hers.

As I read of Paulin, and earlier Jihad Jane, then saw the antipathy earlier referenced in my other blog entries this month (concerning a certain, self-righteous evangelical equally wedded to certainty) it occurred to me that most religion operates as a toxin in the world. This toxin incites wars and hatreds, and sows division even as many of us know there is only one life to live, and if we don’t make the most of it – there’ll be no pie in the sky ones to make up for it.

Thus, it is extremely troublesome when one perceives this toxin spreading to more and more minds. I know I said I was cutting back on the religious-oriented entries (in fact, if readers check, I have), but this young 31 year old woman’s descent into religious insanity and faux rectitude reminded me of another’s- and brought it all back up. That she could so easily forsake her family in the name of some god she’s convinced is authentic, shows me she has no god. She has only an outlandish, outsized ego – and that is what she is actually worshipping.

Here’s another paradox the religious literalist never learns- mayhap because he or she isn’t bright enough: ALL people of whatever faith are ATHEISTS - one faith removed. Thus, Jamie Paulin-Ramirez as an Islamic is now an atheist with respect to all other faiths, but one. The evangelical ditto, so also the RC. If there are 1100 religions or sects the evangelical rejects 1099, and takes the 1 left (his own version). SO, he’s de facto an “atheist” to those other 1099.

BUT – someone complains- don’t they all believe in a God? Maybe, maybe not. The problem is, so long as the purported God-believer doesn’t define WHICH God he accepts, we don’t know. The easiest way to do this is to give the necessary and sufficient conditions for his or her God to exist. So far, only ONE (Christian) believer I’ve ever known has done this – and that was for a Socinian deity. As I noted, this is a limited deity which only knows as much as the most advanced human consciousness at any one time –no more. Thus, it can make errors, oversights, mistakes.

Since the world is full of defects and errors, this god makes more sense than any others I’ve seen pushed by any of the sacred book thumpers….whether Jamie Paulin-Ramirez or the nearest evangelical or Roman Catholic. In addition, perhaps this limited deity - with nothing else to do to pass the time- came up with a super quantum computer program to simulate the universe. Only, there were so many defects in it he almost trashed it....but decided not to. Maybe, because "he" enjoys the ongoing drama and entertainment too much. Almost like "Grand Theft Auto IV- Liberty City".
Posted by Copernicus at 10:19 AM