Political Stupidity- Is There a Cure for It? 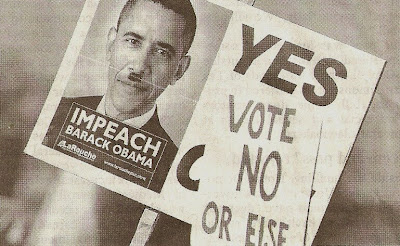 Teabagger depiction of Obama as Adolf Hitler. Are they that ignorant or just stupid?

As I watched the spectacle of a black congressman (Rep. John Lewis, GA) called the N-word at least 15 times by irate tea baggers yesterday (in an ABC News segment) and Rep. Barney Frank (MA) being called the f-word (a homophobic slur of 6 letters) I realized how broken this country is, and how bereft of political rationality or temperance.

In addition to the nastiest of slurs, which ought to be anathema in a truly civil society, the reactionary tea bag brigade also hurled the usual ignorant epithets at the congressmen, to do with “socialism”, “Marxism” etc. Since the Salon.com story (link above) covers the nastiness and racism, homophobia, I will concentrate on the baggers’ economic- political retardation.

In the era of 40 years ago, sad to say, Americans (most of them) could discern the major economic and political systems. I suspect the reason why is because every student at every high school (even public high schools) had to take at least a year of American Government, as well as World History. Because of this exposure people actually learned the differences between fascism, socialism (both democratic and regular) as well as communism and capitalism.

Now, with the spectacle of the Tea Party Movement one recognizes that those days are long gone. What we have is a populist posturing mass of basic imbeciles (politically) who are being led around by the nose by hidden corporate sponsors and thinktanks. (A point that has been brought to the fore in a number of Wall street Journal articles by columnist Thomas Franks (author of ‘What’s the Matter with Kansas?’)

Most Tea Partiers – based on the idiotic signs they carry to most of their protests- have no inkling of the distinction between any of the major economic-political systems. Certainly not by calling Obama a “socialist” or portraying him with Marxian or Leninist attributes.

But as ‘Democratic LEFT- the main organ of the Democratic Socialists of America observes, Obama is about as far from being a Socialist as I am from being a Martian. Readers can see an extensive article on this here:

Socialism and the Politics of Fear

And a YouTube interview with a Temple University Professor (and REAL Socialist) here, on why Obama is not one:

Why isn’t Obama a Socialist in terms of the health care bill on offer?

FIRST, because the bill actually on offer isn’t new! It was the Republican alternative to Hillary Care proposed back in 1993. But as usual, Goopers have short memories when it suits them. In that original Republican health alternative- market exchanges would be set up to allow limited bargaining between health consumers and insurance companies. That is also a central aspect of this plan.

SECOND, I have myself received health care (tonsillectomy, care for gastro-enteritis) in a REAL socialized system and it isn’t anything like what Obama and the Dems are proposing. This was in Barbados, over the 20 years I lived there. In the Barbados system each citizen has a certain percentage of his income allocated each week from his paycheck to National Insurance, which goes toward the National Health System.

When you have an illness or need care – say like my tonsillectomy- you go to the island’s main hospital and are processed, given a room – then assigned a surgeon, or specialist. No money is paid, nor did I have to pay any – ok, I did two days after the operation- pay $5 a day extra for a private room.

In the Barbadian system there is NO private insurance, ZERO. Private health insurers don’t exist. THIS is the key feature of a TRUE Socialist health system – not the gibberish the toadies of the Tea Bag movement are spouting: e.g. that a system WITH private insurance is “socialist”. Because there is no private insurance, no one has to have any insurance but the National version provided by the government, to receive care. Morever, all pre-existing conditions are covered, and no one can be dropped from a treatment because it goes over cost estimates. PEOPLE COME BEFORE PROFITS!

In addition, the Formulary of the National Health Insurance system of Barbados is Socialist, not faux-Socialist. Patients pay one $5 copay per prescription and get whatever they need- without ending up in some “doughnut hole” or going broke because they have something like a private Medicare Part D plan which jacks up copays and premiums each year. In Barbados, NO ONE has ever gone broke from prescription costs, or had to split pills in half to make ends meet. The very thought would be appalling, as it would bein most countries that do have socialized health care.

Thus, anyone who calls the health reform on offer a “socialist one” or “government takeover” is either the most ignorant fool around or an idiot. Or maybe brainwashed! This is why I believe the country is so divided politically: its news and information sources are too fragmented so widely differing perceptions of political and economic reality are sown.


Because there no longer exists a central media journalism purview, most people now obtain their news from hundreds of splintered sources, not all of which exercise the same standards. This also explains why- when a poll by the Pew Research Organization was taken a few years back, 71% of those who obtained their news from reputed journalism sources believed there was no link between al Qaeda and Saddam in Iraq, while the percentage was basically reversed for viewers of FOX News. WHY? Clearly because the latter engages in sophisticated brainwashing and manipulation.

The Columbia Journalism Review (March-April 2010) in an article entitled ‘Dumb Like A Fox’ (page 26) highlights the two key issues that undermine the veracity and credibility of news issued by FOX: a) FOX CEO Roger Ailes is a “seasoned political operator” (p. 28), hence his establishment reflects his political penchant, and b)the actual news portion of FOX content is extremely small relative to its opinion portion (p. 30). This conjunction creates an axis of disinformation, since many viewers who tune in will then tend to confuse the news with the opinion and take the latter as news.

The piece did single one FOX personality, Shepherd Smith – for praise. He among all the others moves to his own drummer and is more honest and forthcoming. I can vouch for that since I still recall in the immediate days after Katrina hit New Orleans, Shep blasting a FOX anchor for trying to portray all the people who were victimized by the hurricane as looters (since constant scenes of looting were being shown). Kudos to Shep – but he’s the exception.

Given so many Tea Baggers likely get their news from FOX, or other biased, deformed centers (e..g. Newsmax) it isn’t surprising so many would evince so much ignorance to do with basic economic-political distinctions.

Before ending, there’s one more that needs to be cleared up – the difference between the National Socialism of Hitler, and the Marxist-Socialism of Karl Marx and others. In fact, the first is a total misuse of the term -since Hitler’s Party were actually extreme RIGHT Fascists, while socialism or Marxism is LEFTIST.

Clueless tea baggers need to do themselves a favor and get Ian Kershaw’s magnificent account of Hitler’s rise to power (‘Hitler Nemesis’). They will easily see that the Weimar Republic (which preceded Hitler’s Nazi state) constituted a weak democracy which had little or no control over the most radical Rightists, especially Hitler’s NSDAP (National Socialist of Deutschland) party. They would regularly beat Marxists, socialist, any leftists on the streets while holding up signs that read: “Tot dem Marxem” (“Death to Marxists”). Obviously this blows a hole in the idiotic depictions (on signs) of Obama as a Marxist and Nazi! (Or sporting a Hitler mustache!)


“Leaders of big business, though often harboring private concerns about current difficulties and looming future problems for the economy, for their part were grateful to Hitler for the destruction of the left-wing parties and trade unions. They were again ‘masters in the house’ in their dealings with their work force”

Well, looks like a capitalist reactionary’s wet dream to me! Eliminate the Left, the Marxists, Commies or whoever was opposed to the spread of Big Business oligarchies and monopolized capital! THIS was Adolf Hitler’s shtick and it’s nothing like Obama’s! Meanwhile, had Germany's REAL Socialist and Marxist parties prevailed in the 1932-33 elections: a) Hitler would never have come to power, b) no concentration camps using captive, slave labor to make munitions, rifles would have arisen, and c) No gas chambers would have been made- using Zyklon B compliments of the chemical manfacturer, I.G. Farben! Put that in your pipes, tea baggers!

Meanwhile, last I checked, Obama – while he’s bailed out banks – hasn’t taken them over, kicked all their CEOs off the respective boards and replaced them with government workers. He hasn’t expunged their stocks or shares, or converted them into government securities. So the morons are talking chalk and cheese. They don’t know a “Socialist” from a Marxist from a Communist….and likely from a Zeta Reticulan either!

The amusing thing to me is that there is already rampant socialism in the US of A. It’s just that it’s corporate socialism – not socialism for the masses. In every way – using every kind of dodge, hollow law and loophole, corporations are protected from the “free market” they so readily espouse. As when the Savings and Loans were bailed out in 1989, then Long Term Capital Management was bailed out by taxpayers, in 1997. And the airlines were bailed out with billions from the public purse in 2001-02. Plus the banks in 2008 without also making their aid contingent on conditions (like no more dabbling in credit default swaps).

Tea baggers are now being contended for by the GOP. Let them have them. Last thing we need is a Dem party with a ten million contingent of birdbrains who don’t know history, can't tell a fascist from a Marxist or capitalist, and are more about reactionary racist rage than constructive action to repair this divided nation. It is clear to the most dense denizen of these United States that all the uproar showing Obama as Hitler, a Stalin, etc. - is a camouflaged racism when all is said and done. The tea baggers know how unbecoming it would appear to have signs of Obama with the N-word emblazoned on them - so they use Hitler and Stalin, etc. depictions instead. Nice try, but we can see through it!
Posted by Copernicus at 11:00 AM

I'm glad you broought to light how Hitler cynically misused the word "Socialism'. Because anyone who's studied any history knows what he really had was fascism.

Just because a tyrant uses a word to describe his economic or political system doesn't mean you take it literally!

For example, take the Democratic Republic of North Korea.

Are they a Republic? NOOOOOOOO!

Are the Democratic? NOOOOOOO!

Only untutored, uneducated people literally take what tyrants describe as the actual thing.

The teabaggers and their ilk need an education more than anything else!