Is the Universe A Simulation? (I) 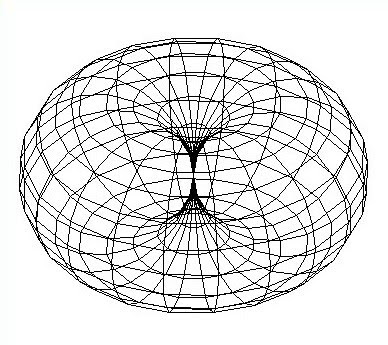 Above: One version of a simulated universe in which the "alpha" (beginning) and "Omega"(end) points are the same. This would be located exactly at the thinnest part of the "neck". The entire entity exists in a 4-dimensional space embedded in a 5-dimensional manifold.


In a recent speculation (‘Are You Living in A Computer Simulation?, Philosophical Quarterly, No. 211, 2003) Nick Bostrom considered whether the universe and everything within it (including stars, galaxies, planets and human being.) is one massive simulation- a vast and intricate hyper quantum computer program being run from outside- perhaps by an extraordinary intelligence. (For example, a Kardashev Type IV Civilization which is capable of using the energy of an entire galaxy might qualify – since the energy to run such a quantum computing simulation would consume about 10^44J or half the energy of a galaxy like Andromeda in one year)

Note here that the basis for a quantum computable universe has already been well explicated in books such as: ‘Programming the Universe’ by Seth Lloyd.

In addition, given all entities are mostly empty space anyway – ultimately predicated on quantum wave forms, or wave functions, one can easily see how the ability to manipulated quantum units at will could lead to a simulation of an entire universe. In fact, if one builds consistently on quantum mechanics one can theoretically arrive at all the macroscopic laws of nature that we see govern our universe. For example, in the limit of the quantum number n -> oo, quantum mechanics converges to Newtonian mechanics,

In a sense, if the universe is simulated, then we and all other life forms within it are “avatars”. But how would one know it or prove it? First things first. Is this equivalence of physical body and cyber-body (avatar) going too far? I don't believe so. The cyber-body is ultimately composed of moving electrons and quanta (photons) that cause multiple pixels on the monitor screen to vary in intensity, producing the illusion of motion. By the same token, the physical body is ultimately constituted of electrons, and can receive and process photons, e.g. by the optic nerve. On a quantum mechanical level the two 'bodies' are very nearly the same. The differences appear at the gross or macroscopic levels, where the physical body displays a 3-dimensional solidity and differentiation of organs, tissues and cells. But are these fundamental? Who can say? It depends on the constructions, doesn't it? In virtual reality, tissues or organs of the physical body would be useless to an avatar. Similarly, the jumping electrons and quanta of an avatar would be useless to my stomach, lungs or other organs.

But if the simulations were done cleverly enough, say using quadrillions of quantum spin system gates operating in tandem, arguably no one would know the difference.

Physicist Frank Tipler of Tulane University has also postulated a virtual universe in his book, The Physics of Immortality. Perhaps the ultimate virtual reality scenario entails Tipler's use of the Bekenstein Bound.[1] According to Tipler, any and every being that has ever lived (I am not sure about animals but suppose this includes them) will be resurrected in an infinitely advanced virtual reality. In the subjective time frame, all those inhabiting that last instant (in proper time) will experience a reasonable (virtual) facsimile of eternity. It is important to note that all these resurrected beings are simulations, not beings in solid material form (i.e. human bodies). Nonetheless, these simulations, much like those in a high-level virtual reality computer program (MOOs), can interact.

One immediate problem with Tipler's simulation scenario is the fact that the Bekenstein Bound (upper limit on rate of information processing) has been proven to apply exclusively to flat space-time. The geometry of the cosmos, meanwhile, has yet to be explicitly fixed.

Another major problem concerns the use of informational replicating machines, "von Neumann machines"[2] , to spread humanity (and presumably intelligence) to all corners of the cosmos. Indeed, this is a pivotal assumption on which Tipler's Omega Point depends. If von Neumann machines cannot exist, or they cannot achieve these grandiose objectives (replicating themselves and spreading throughout the universe), then Tipler's simulation-resurrecting cosmos cannot come into being.

As I see it, the postulate of self-replication violates two basic principles: Gödel's Incompleteness Theorem, and the Principle of Information Entropy. Let's take the Incompleteness Theorem first. Basically, it asserts that all structured logical systems must be incomplete. That is, there exist propositions within them that are true, but cannot be proven. There also exist other propositions that are 'undecidable' from a true-false test.

One such structured logical system might be the computing code for a von Neumann machine. This may comprise some 'N' formal statements - that are used to specify the behavioral and other limits for the machine. The key question is whether these 'N' coded statements, comprising the entire matrix of machine information, can successfully be replicated in another machine. This is possible if E, the entropy (in bits/second) of the message/information source (von Neumann machine), is less than the capacity of the information channel[3] (in bits per symbol).

For the sake of argument, let 10^10 bits be associated with each statement in a von Neumann code (program). Each machine processes an Entropy E = N x 10^10 bits/second. In addition, we have: E = N x 10^10 bits/second. Here is the problem: all the statements in the code concern the behavior per se: what the von Neumann machine is to do. They include nothing about replicating itself! This replicative statement therefore exists outside the code - it is a meta-statement! One requires at minimum an Entropy:

We can see, E' > E, so the message cannot be transferred! The entropy exceeds the bounds of the information channel capacity. Phrased another way, the statement for replication arises from outside the system of code, not from within its instructions. In other words, the command 'Replicate!' may be true but it is unprovable within the Gödelian loop to which all logical systems are constrained. And, so long as it is unprovable, it will not be executed by any von Neumann machine! In effect, there can be no 'self-reproducing universal constructor with human level intelligence'. The Omega Point, at least as conceived by Tipler, cannot be a reality now or in the future.

I noted already the geometrical aspect of the problem, with Tipler's assumption of a flat space-time. Related to it is the fact that any 'resurrections' in the Sim-Cosmos must occur in the past not the future! In other words, humans existing here and now (the 'present') are exactly the simulations (processed information) of a distant future signal that has been propagated from the earlier avatars!

Next: The Quantum computing basis of a Universe simulator

[2] See, e.g.: Tipler, F.: 'Extraterrestrial Beings Do Not Exist', in Frontiers of Modern Physics (Ed. Tony Rothman), 1985, Dover Publications, Inc., p. 160. The basic idea is that the 'von Neumann machine' is the machine equivalent of a human. Tipler's argument - in both this article and 'The Physics of Immortality', is that if the Bekenstein Bound applies to humans, they are also finite state machines - like 'von Neumann machines'. This, however, can only be true if humans are localized. In the quantum view, humans are nonlocal and can access an infinite frequency domain (See, e.g. my earlier blog on Models of the Mind). Hence, the finite state description, via the Bekenstein Bound, is only applicable at the cosmic (entropic) level.