The Cosmic Perspective and Misreading Einstein 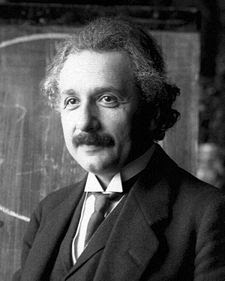 Albert Einstein - two years after his tests of general relativity at Sobral, Brazil. His fame arrived with these tests, but he became fodder for exploitation by religious zealots.

What is the cosmic perspective? In a nutshell it implies the rejection of belief in all specialness in the human species as the be-all and end-all of the cosmos. It means applying the Principle of Mediocrity to our condition - to wit, that principle which over the past thousand years has ever more removed humanity from its special perches - whether the belief its home world was the center of the universe or the belief that humans were the exceptional species in the animal kingdom. (Darwinian evolution having proven we are the DNA cousins of apes)

Thus, it amount to taking a long and large view of human existence, while nullifying its concepts of privileged destiny. These lie at the very root of human identification and meaning, which necessarily entail religious outlooks- but these must be questioned. One who persistently did such questioning is Albert Einstein, but the tragedy is that he has been so frequently exploited by religious zealots that few know what he actually thought. To clarify, the best strategy is to get access to Einstein's own writings in his own books, as opposed to what others have written on him.

One of Einstein's most frequent themes in his books, such as Ideas and Opinions, is that of "cosmic religious feeling". By that the great man didn't mean ties or adherence to religion or religious belief, but an expansive sense of connection to the universe at large. For example, he wrote:

"The individual feels the futility of human desires and the sublimity and marvelous order which reveal themselves both in nature and in the world of thought. Individual existence impresses him as a sort of prison and he wants to experience the universe as a single, significant whole"

Einstein goes on to state that this feeling:


"...knows no dogma and no God conceived in man's image - so there can be no church whose central teachings are based on it"


The preceding is critical to grasping Einstein's take on human-fabricated religions, since he establishes clearly from the outset that he links up or affiliates with no church or any dogma. Nor with a God that is crafted in any human image. Thus, fundamentalists who try to squeeze Einstein into a pigeon hole of their own making do him and their own followers a great disservice.
Indeed, Einstein discloses the need to grow beyond particular God-concepts (especially anthropomorphic ones) and religious allegiances toward a more universal outlook. This is not an easy path, as those who advocate universalism are generally regarded as disloyal. Einstein himself notes (Ideas & Opinions) that those who dared (historically)to articulate the "cosmic religious feeling" were often looked on as "heretics" or "atheists". This is an amazing observation, given so many who actually try to press Einstein into their service, usually are extremely hostile to atheists!

To show even greater emphasis in terms of Einstein's personal opinions of orothodox religion, one may reference his words in Ideas & Opinions:

"It was, of course, a lie what you read about my religious convictions, a lie which is being systematically repeated. I do not believe in a personal God and I have never denied this but have expressed it clearly. If something is in me which can be called 'religious' then it is the unbounded admiration for the structure of the world so far as our science can reveal it".


This is notable because it marks the first time Einstein has called out those who tried to exploit his fame for their own misinformation. Using his renown to propel their own nonsense which Einstein himself would have outright rejected. He also makes clear that he rejects a personal God, which means his deity would never be understood or comprehended by those of conventional religious backgrounds, for whom a personal God is central.

“was consistently agnostic with respect to any belief in a God preoccupied with the working out of human destiny. Though Einstein made constant and amiable references to “God” throughout his life, these were always taken to mean the rational connections, the laws, governing the behavior of the universe”.

And - reinforcing Einstein's own words- as Bernstein notes later (ibid.) Einstein had no use at all for any personal God concept or “Savior” derived from it. Nor did he even accept a life after death, as when he wrote (Ideas and Opinions):


"Neither can I nor would I want to conceive of an individual that survives his physical death. Let those feeble souls, whether from fear or absurd egotism, cherish such thoughts"


Despite the fact that Einstein's own works are seeded with warning that whatever religious aspirations he may have differs from the pedestrian norms (especially of American Fundamentalist Christianity) the zealots are still obsessed with quoting him out of context. Nonetheless, from 1920-21 on, Einstein was thoroughly aware that sundry agents, news editors had been putting words into his mouth, trying to portray them as at least allowing for a personal God, pseudo-Christian interpretation. After all, even today, scientists speaking to newspapers have little or no control over their content. Many times they are astonished to see words put into their mouths they never uttered- or beliefs assigned that they never embraced.


One of the most astounding wake up calls, or what should be! - is often ignored by the headstrong, indiscriminate Einstein quoters. This concerns clear statements of Einstein wherein he made it abundantly clear he subscribed to NO personal God, nor did he accept an afterlife - nor did he accept the concept of “free will”. As he wrote in his ‘Ideas and Opinions’:


"A God who rewards and punishes is inconceivable ...for the simple reason that a man’s actions are determined by necessity – internal and external- so that he cannot be responsible….any more than an inanimate object is responsible for the motion it undergoes.”

“The man who is thoroughly convinced of universal causation cannot for a moment entertain the idea of a being who interferes in the course of events- provided of course, that he takes the hypothesis of causation really seriously"


Study the words and context! “The man who is thoroughly convinced of universal causation”. What does this mean? It means, following the original deterministic concept of Lagrange, that every physical effect has a direct physical cause EVERYWHERE in the universe. E.g.

If object A above collides with object B it will cause B to move off at some defined angle and with some momentum and velocity. (See the earlier blog : 'Laws of Physics in a Nutshell') Things do not occur without physical causes. Thus, for the serious scientist that accepts this premise, it is impossible to accept also a “being who interferes in the course of events”. In other words, NO miracles – no raising the dead, NO resurrections, and NO God men!

If Einstein accepted no personal deity, then exactly what kind of god did he accept? Bernstein in his biography of Einstein makes it abundantly clear (op. cit., p. 21), that his god inhered in the "rational connections, the laws governing the behavior universe.... wich are also comprehensible to us". Of course, this "god" would not be regarded as any accepted - certainly by the orthodox Christian (it might by the heterodox Christian, e.g. Science of Mind practitioner)

Einstein did leave the door open for the orthodox, however, when he wrote in Ideas & Opinions:

"To be sure, the doctrine of a personal God interfering in natural events can never be refuted, in the real sense - by science. For this doctrine can always take refuge in those domains for which sceintific knowledge has not yet been established"

This is the place where the honest religionists' invocation of Einstein needs to begin. Not from contorted or distorted statements.

Finally, I want to look at one Einstein quote often mangled as it is below:

"This source of feeling , however , springs from the sphere of religion . To this there also belongs the faith in the possibility that the regulations valid for the world of existence are rational , that is , comprehensible to reason . I cannot conceive of a genuine scientist without that profound faith."

This is often attributed to Einstein but is seriously miscast, and the punctuation wrong- which totally alters the meaning. Let us look at the actual quotation from Ideas and Opinions:

"To the sphere of religion belongs the faith that the regulations valid for the world of existence are rational, that it is comprehensible to reason.
I cannot conceive of a genuine science without that profound faith. The situation may be expressed by an image: 'science without religion is lame, religion without science is blind."


Note carefully, the alteration in the presentation of the first quote. In the first paragraph, the misplaced punctuation (comma after that is) totally alters the meaning intended. Thus, Einstein meant that the religious faith he mentions is faith that the universe conforms to a regularity in laws....physical laws. So this is consistent with elucidating his god as the "laws of the universe". His point here is that if religion lacks this faith in the regularity of physical laws, it's blind. If science lacks the faith element that the physical laws are regular, then science is lame. What he meant is that without such implicit faith scientists would lack the confidence to formulate their laws. They would adopt merely formulistic, conditional approaches with no generality.

The problem is so few grasp what Einstein really meant, confirming Abraham Pais' take in his article, 'Einstein and The Press', Physics Today (August, 1994) , p. 30.

"In my opinion, Einstein's worldwide renown was caused by the role of language. Even though so very few had a real grasp of Einstein's contributions their contents nevertheless lend themselves very well to expression in everyday language. Because Einstein communicated in language that seemed to be accessible, everyone thought they knew what he was saying - but really didn't. "

Or maybe they didn't because they deliberately altered the meaning of his words (by misquoting him) to suit their own agenda.
Posted by Copernicus at 5:46 PM

"What he meant is that without such implicit faith scientists would lack the confidence to formulate their laws. They would adopt merely formulistic, conditional approaches with no generality"

I'm really elated someone actually took the time to finally correct that (misrepresented) quotation of Einstein. I wondered how many years, decades it would be before people noticed that this often cited quote was butchered to conform with an orthodox religious interpretation.

You not only showed where the butchering took place, and word order even altered, other words added - but showed how the interpretation changes when one reads the correct quote.

Obviously, Einstein didn't mean religion in the usual orthodox sense since he had already said he didn't subscribe to such human organizations! He meant exactly the religion of the cosmic perspective - the unifying laws of the universe as embodied in mathematics.

But of course the religious freaks will never grasp that or process it. Far easier to scream that THEY have quoted Einstein accurately and WE are the ones doing the rewording. They can't deal with reality!

Thanks for a great job of portraying Einstein in a proper light as opposed to the way some have framed him as an ardent religionist.