Resolved: Atheists Not Resort to Buffoonery to elicit attention 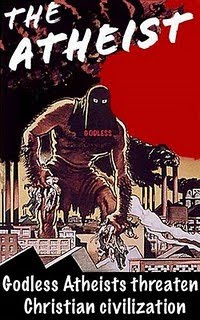 DO we really want people to see us as "Pastor Mike" portrays us? If not, we need to be careful about how we garner attention!

In a scathing editorial in today’s Colorado Springs Gazette, the editors took atheists to task for using highly suspect tactics to gain attention (notoriety?) and bring others to their cause. As noted in the ‘Our View’ Editorial:

This is good advice. There’s no reason atheists need to resort to such sleazy tactics to attract interested people – and this sort of thing plays directly into the hands of anti-atheist zealots like “Pastor Mike” (see his latest blog cartoon on atheists, pictured above).

Do we really want or need more piling on about how “evil” we are, not to mention joined at the hip to our best “pal”, Satan? No we don’t! Those college atheists therefore need to grow up and find a constructive way to gain attention. How about holding seminars or discussion groups? Or - convene a debate between believers and non-believers?

I also think it unwise, again from the editorial – for the Freedom From Religion Foundation to battle the U.S. Postal Service over its new Mother Teresa stamp.

All this will do is earn us more enemies we don’t really need right now. Battling the USPS over a stamp in the end will make little difference. Much better to inform people that the good Mother simply kept people in a state of dependency in Calcutta but never really addressed their physical needs. (She did tend to their “spiritual” ones, for what that was worth).

In other comments, the editorial was way wrong, for example in claiming "the movement toward mainstream status for atheism may have come and gone in a flash". Not really, because technically – although atheism has some prominent spokespersons, it is not a movement. A movement presupposes millions who share common cause in uniform principles, philosophy and ways of working together. The American atheist contingent is not that – but mostly 18 to 20 million individuals who can’t even agree on the same form of Materialism. (I already noted in previous blogs at least five types and there are actually at least eleven).

Thus, it's as supercilious and foolish to say we comprise a “movement” as to say we are a “religion”. Both are stupid, because both presume a uniformity we simply don’t possess . Heck, atheists are even split between withholding belief in a deity (implicit atheism) and asserting flat out that "there is no deity" (explicit atheists). Then add to that the atheist agnostics, who don't believe there's enough knowledge to even warrant the question of belief - and you see how we are all differently aligned. As one wag put it: "I guess you could say we’re like Democrats – trying to herd them is like trying to herd cats". Too true! Of course, this also means the misbegotten efforts by zealots to portray us as one monolithic threat (see Mikey's cartoon) are also off base.

Thus, the editorial’s claim that “the atheist movement is falling apart” is nonsense, since there never was any “movement”.

As for political aspirations, no realist atheist I know expects that to occur in his or her lifetime. This country will likely go the way of Rome before a true atheist is even elected Senator – far less President. It’s time we grow up and realize that. A nation which largely regards informed unbelief as some kind of moral disease or mental deviation will never elect any of its members to office - probably not even dog catcher.

Atheists come together to share their firm unbelief in magical entities, and to share their woes and rejection with one another when a non-understanding, intolerant outside world treats us as lepers.

There is one sentence, with the exception of the first word, we can probably agree with the editor on:

“God may love the honest atheist more than a mainstream religious hypocrite, who feigns belief for practical advantage and lives in opposition to everything religion teaches.”
Posted by Copernicus at 2:38 PM