Solar Oblateness And The Solar Quadrupole Moment: What's The Connection? 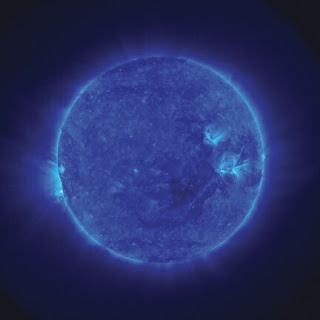 Solar oblateness has been key to tests of general relativity, including by my former Mathematical Physics prof at Loyola, Carl Brans.

Solar oblateness came to the fore some decades ago when it was invoked to challenge the standard Einsteinian General Relativity. This was as part of the Jordan- Brans- Dicke theory of gravity proposed by Robert Dicke of Princeton and Carl Brans - my former mathematical physics prof at Loyola University ca. 1966.  (See image)

As with all rotating celestial bodies - planets included - the Sun is "oblate", meaning that it "bulges" at the waist, i.e. solar equator. The measure of this bulge is then the ratio of the equatorial diameter's excess (i.e. over the polar diameter  or (a- b) to the polar diameter (b) itself. Or:
Obl = (a - b)/ a

Less known is the fact that an oblateness gives the Sun what is called a "quadrupole moment" which we designate J2. The dimensionless parameter J2 is defined (cf. 'Gravitation and Spacetime' by Hans C., Ohanian and Remo Ruffini, W.W. Norton, p.18):
J2 = Q 33/  2M R 2
where M is the mass of the Sun, R is its radius, and Q kl =  Q 33 is the mass quadrupole tensor (op. cit., p. 17).  To assess a baseline perspective, if the Sun were rotating totally uniformly oblateness effects minimal) then J2 would be roughly 1 x 10 -7. In this case, the corresponding contribution to the advance of Mercury's perihelion would be a few hundredths of an arcscond per century, or in other words, within the observed value of the uncertainty for 'eta' (e  ).
Interestingly, Brans and Dicke (1961), originally proposed a 'scalar-tensor' theory of gravitation which avoided conflict with the Einstein GR prediction. In their field the scalar field replaced the gravitational constant and becomes instead a function of space and time, so oe gets a variable value for G - the Newtonian gravitational constant. Effectively, one is looking at a quantity G'/G where G' denotes the first time derivative, or dG/dt.
Meanwhile, in 1967, Dicke and Goldenburg obtained an unexpectedly large J2 ~ 2.5  + 0.2 x 10 -5 which - if accepted- would show significant deviation from the Einstein predicted value for Mercury's perihelion advance. It would also have required that the solar interior rotate at a much faster rate than the surface. Such a large quadrupole moment would have led to an additional 3 arcsecs per century over Einstein's value. Thus, leading to  e ~ 46"/ century. This large value has never been confirmed, and indeed, Dicke et al (1985) using a solar vibration method found J2 = 1.7 x 10 -7  .   According to this value of J2, also obtained by three other investigators (Christensen et al, 1985, Duval et al, 1984, Brown et al, 1989) the observed perihelion advance of Mercury is in agreement with the general relativity predictions.  Nevertheless, a definitive J2 value has yet to be determined.  (By 'definitive' I mean the accuracy in measurement ought to be of the order  10 -8 )
Quite obviously, what the preceding showed is that better methods of measuring oblateness (and hence the quadripole moment J2) are needed, but which exceeded optical methods, including digital photocells, and also oscillatory -vibration methods. Such an advance on observational quality became feasible in 2010 with the launch of NASA's Solar Dynamics Observatory (SDO). This Observatory was able to measure with record precision the shape of the solar limb (the solar disk's edge) and in addition ascertain variations in the limb over a solar cycle.
The results forthcoming were simply amazing, i.e. that the Sun's equatorial radius exceeded its polar radius by 7.2  + 0.5 milliarcseconds, and with NO evidence of departure from constancy. Given the Sun's diameter of 1.4 million kilometers subtends a half degree in the sky (1800" roughly) then the difference between its equatorial and polar radii would amount to barely 5 km. In other words, it's almost perfectly spherical. Most remarkably, the 5 km difference is small even when compared to the turbulence on the solar surface
Further refinement - especially useful over solar cycles - was obtained by incorporating best -fit quadrupole (C2) and hexadecapole (C4) coefficients. Then  'to 4th order' the difference between equatorial and polar radii is given by:
D = -3C2/ 2  - 5C4/8
Amazingly, within the range of observational uncertainties, both C2 and C4 have been consistent with constancy over two years. Moreover, C4 is effectively zero (contributes very little to solar oblateness) so:
D = -3C2/ 2
Further analysis using Legendre polynomial multipole data discloses a marginal hint of correlation between C4 and the sunspot cycle - which may or may not assume importance for future sunspot -flare forecasts.