"Sea Is Rising, But Not From Climate Change" - Fred Singer's WSJ Op-Ed Calls Into Question His Mental Acuity

S. Fred Singer has been notorious in climate science circles for many years. Though ostensibly trained as an "atmospheric physicist" and even with some rocket science background, Singer has proven himself to be one of the most obdurate deniers of global warming.  More recently, as in a Mar. 18 WSJ op-ed ('The Sea Is Rising, but not from Climate Change') it appears he's devolved into full blown senility or maybe early onset Alzheimer's.   The touched -in- the- head simpleton writes:

"Of all known and imagined consequences of climate change, many people fear sea-level rise most. But efforts to determine what causes seas to rise are marred by poor data and disagreements about methodology. The noted oceanographer Walter Munk referred to sea-level rise as an “enigma”; it has also been called a riddle and a puzzle.

It is generally thought that sea-level rise accelerates mainly by thermal expansion of sea water, the so-called steric component. But by studying a very short time interval, it is possible to sidestep most of the complications, like “isostatic adjustment” of the shoreline (as continents rise after the overlying ice has melted) and “subsidence” of the shoreline (as ground water and minerals are extracted). I chose to assess the sea-level trend from 1915-45, when a genuine, independently confirmed warming of approximately 0.5 degree Celsius occurred.

I note particularly that sea-level rise is not affected by the warming; it continues at the same rate, 1.8 millimeters a year, according to a 1990 review by Andrew S. Trupin and John Wahr. I therefore conclude—contrary to the general wisdom—that the temperature of sea water has no direct effect on sea-level rise. That means neither does the atmospheric content of carbon dioxide.


This conclusion is worth highlighting: It shows that sea-level rise does not depend on the use of fossil fuels. The evidence should allay fear that the release of additional CO2 will increase sea-level rise."

Of course, this is absolute nonsense, and the reaction- response of  (real) climate scientists to this offal was not long in coming.  Among the first to respond (WSJ letters, May 16) were Prof. Andrea L. Dutton of the University of Florida, and Prof. Michael Mann of Penn State.  They wrote, in deliberate sarcastic frame:

"Would the Journal run the op-ed 'Objects Are Falling, But Not  Because of Gravity'? That's pretty similar to climate contrarian Fred Singer saying The Sea Is Rising but not from Climate Change.

No, ice is not accumulating on Earth, it is melting. No, Antarctica isn't too cold for melting - warming oceans are eroding the ice from beneath, destabilizing the ice sheet. And no, legitimate scientific conclusions are not reached in op-ed pieces but through careful, peer-reviewed research".

Which begs the question of why Singer didn't get his major climate "find" published in a major journal. Well, most likely because after he sent it in - assuming he did - the referees were unable to stop laughing from hysterics.  That's because they'd know, as the authors write "research shows that sea levels are rising and human -caused climate change is the cause."

The best part is when they give Mr. "Rocket scientist" Singer a basic thermal physics lesson, this is after he writes "the cause of the trend is  puzzle":

"When water warms it expands. When ice warms it melts. To deny these facts is not just to deny climate change. It is deny basic physics."

Among the dumbest takes is seen at the end when Singer scribbles:

"Currently, sea level rise does not seem to depend on ocean temperatures and certainly not on CO2. We can expect the sea to continue rising at about the present rate for the foreseeable future."

To which letter writer Wendy Fleischer responds, citing NASA, via a Feb. 13 paper:

"Rising concentrations of greenhouse gases in Earth's atmosphere increase the temperature of air and water, which causes sea level to rise in two ways: first, warmer water expands, and this thermal expansion of the ocean has contributed about half of the 7 centimeters of global mean sea level rise over the last 25 years. Second, melting land ice flows into the ocean, also increasing sea level across the globe."


Which begs the 2nd question of whether we need to send Singer back to school for a remedial physcs lesson.

In a summary retort from climatefeedback.org we read:


This commentary published by The Wall Street Journal, written by Fred Singer, claims that warming (and therefore greenhouse gas emissions) has no effect on global sea level rise. Although Singer concedes the physical fact that water expands as its temperature increases, he claims that this process must be offset by growth of Antarctic ice sheets.


Scientists who reviewed this opinion piece explained that it is contradicted by a wealth of data and research. Singer bases his conclusion entirely on a cherry-picked comparison of sea level rise 1915-1945 and a single study published in 1990, claiming a lack of accelerating sea level rise despite continued warming. But in fact, modern research utilizing all available data clearly indicates that sea level rise has accelerated, and is unambiguously the result of human-caused global warming.


Since the 1990s for example, satellites have measured an acceleration in the rate of global sea level rise: 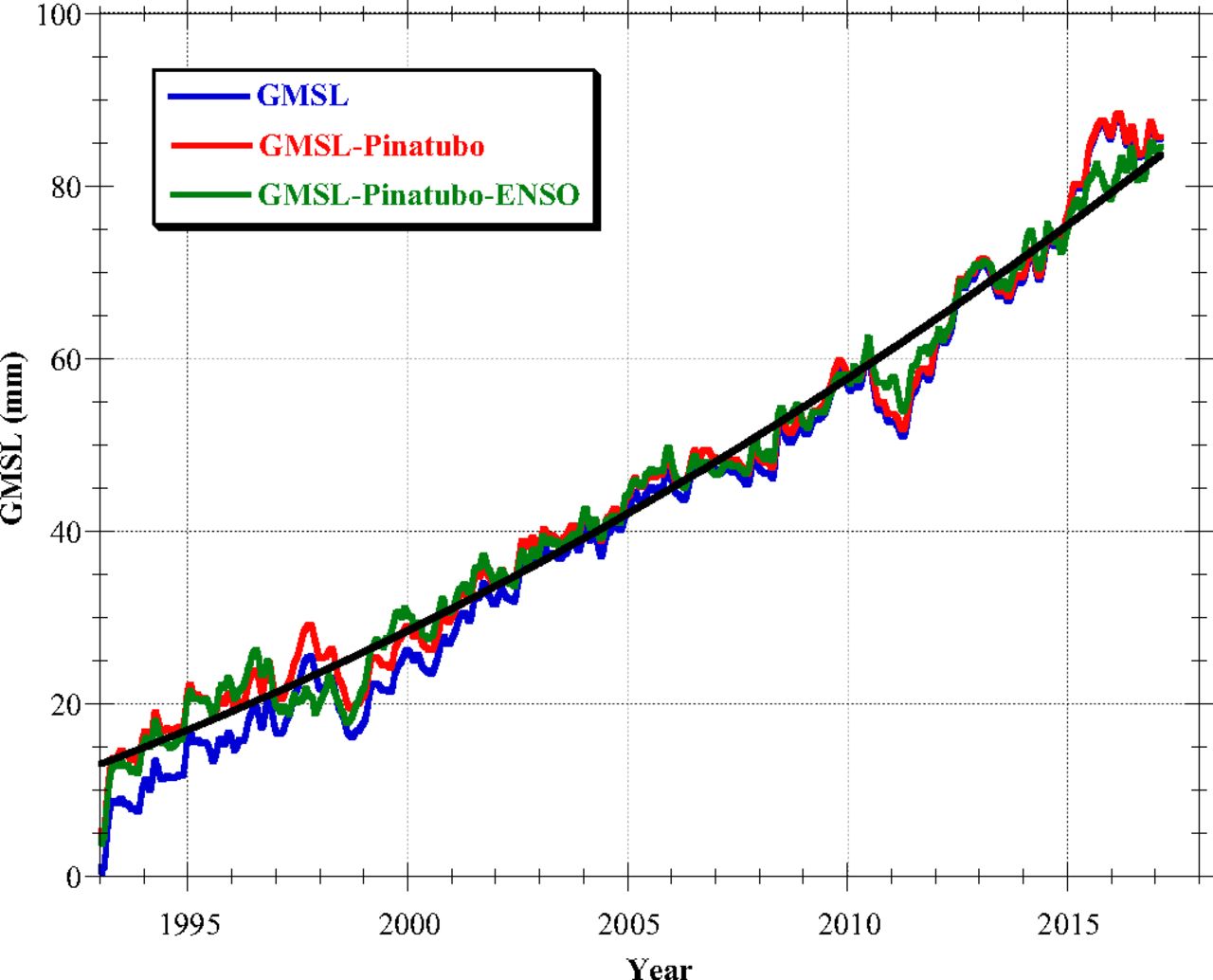 Global mean sea level (blue), after removing an estimate for the impacts of the eruption of Mount Pinatubo (red), and after also removing the influence of El Niño (green), fit with a quadratic (black). From Nerem et al. (2018)

These comments are the overall opinion of scientists on the article, they are substantiated by their knowledge in the field and by the content of the analysis in the annotations on the article.

This article severely misrepresents the scientific understanding of the processes responsible for observed changes in global sea level. Understanding and attributing the causes of changes in global sea level is an area of active research and there are genuine uncertainties, but there is a clear consensus on the important roles for ocean thermal expansion and addition of mass to the oceans from melting glaciers and ice caps during recent decades. For example, the following paper by Church et al. (2008)* summarizes the independent lines of evidence for changes in sea level from satellite altimeter and tide gauge measurements and how these changes can be explained by a combination of thermal expansion and exchange of mass (either liquid water or ice) between the oceans and continents: 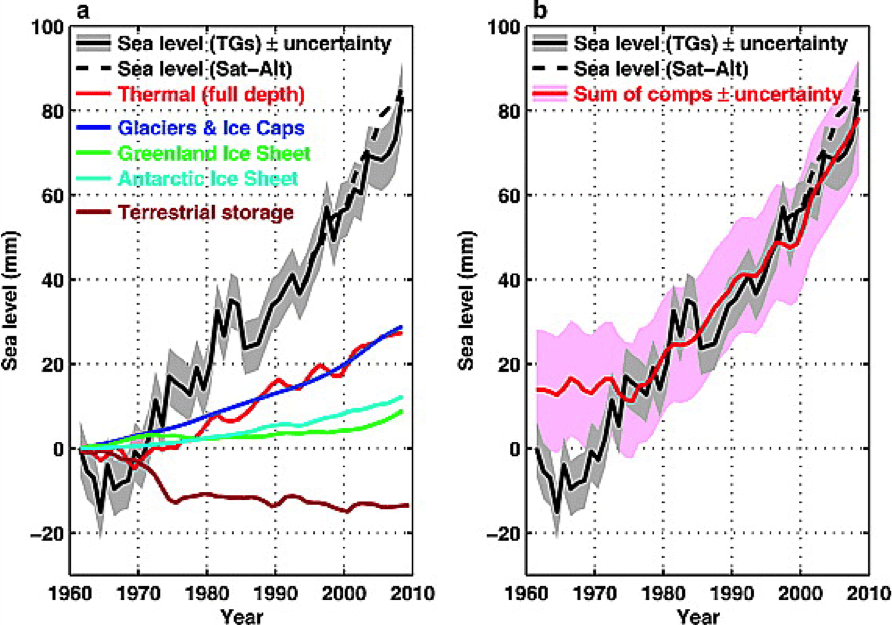 The article has almost nothing to do with the modern state of sea-level science. The author tries to call into question that global warming causes sea-level rise, and does so by cherry-picking a short segment of data from 1915-1945, a time when data quality is poor and the warming signal small—a bizarre approach that could never pass scientific peer review and is apparently aimed at misleading a lay audience.

Other criticisms:  On Singer's reliance on "outdated, cherry -picked data":

This is a blatant case of cherry picking to confirm a Singer’s position while ignoring all other instrumental sea level data that may contradict that position. This fallacy is a major problem in public debate.
Stefan Rahmstorf, Professor, Potsdam University:

It is rather ironic that the author first complains about “poor data” and then goes on to cherry-pick a time of particularly poor data that includes the World War 2 period. Even the temperature data from this period are questionable; the sea surface temperature data show a strong warm peak at the end of WW2 (the basis of his claim of 0.5 °C warming) which is probably a data collection artefact, given that no such warming is seen in the data collected at the global network of weather stations on land. Also, in the peer-reviewed literature it has been shown that minor inaccuracies in sea-level data by just a few millimeters can lead to spurious fluctuations of sea level trends when too-short time intervals are considered*.

So the takeaway from all these climate specialists is that Fred Singer doesn't know what the hell he's writing about. But again, bear in mind it's an op-ed in the WSJ - which as one climate scientist put it "just tells its readers what they want to hear".

With this latest load of pseudoscientific twaddle, Singer has shown himself not only an incompetent agnotologist - from the Greek agnosis, or to sow doubt- but either suffering from premature senility or.....being gracious, now one of the Climate Denier Three Stooges. That would be right along with 'Moe' and 'Larry'......errrrr… Richard Lindzen and Willie Soon.