Question:  I have recently heard about Project Lucifer. Can you please explain what it is and its purpose? Thanks!

Answer:   LUCIFER I, refers to two giant 27.6-foot-diameter (8.4 meters) telescope mirrors, comprising the Large Binocular Telescope, installed at Mount Graham, Arizona.  . Each instrument is cooled to -351° Fahrenheit (-213° Celsius) in order to observe in the near-infrared wavelength range. Near-infrared observations are essential for understanding the formation of stars and planets in our galaxy as well as revealing the secrets of the most distant and young galaxies.

According to Richard  Green, a professor of astronomy at the University of Arizona's Steward Observatory:

"With the large light-gathering power of the Lucifer 1, astronomers are now able to collect the spectral fingerprints of the faintest and most distant objects in the universe,"

Even better, LUCIFER's novel, ingenious design will allow astronomers to observe star-forming regions in unprecedented detail, which are commonly hidden by dust clouds. The instrument is remarkably flexible, combining a large field of view with a high resolution. It provides three exchangeable cameras for imaging and spectroscopy in different resolutions, according to observational requirements.

A recent image from the Lucifer I  scope is shown below: 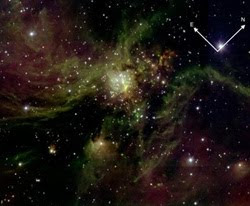 After Lucifer's twin (Lucifer II)  joins it ca. 2011,  we can look forward to finding many stellar nurseries and emerging new formed stars such as the now recognized T Tauri stars.Some of these T Tauri stars have been observed in the well-known Orion Nebula, about 1600 light years away.

The T Tauri and other observations clearly demonstrate that creationism can’t be valid. If it were, no new stars should be forming!

Posted by Copernicus at 4:26 PM