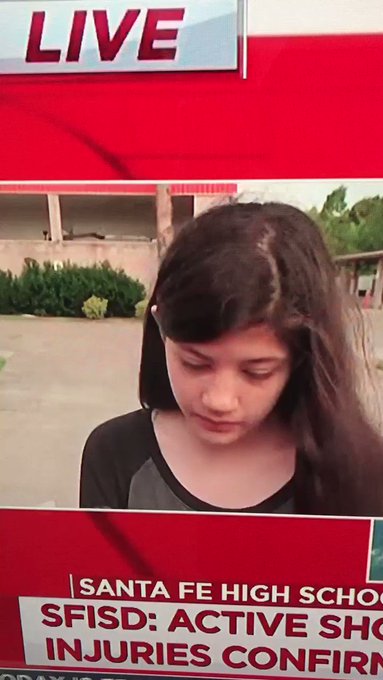 Santa Fe HS student Paige Curry declared a sense of inevitability about school shootings. In fact, that only applies to states like hers that fail to act with new gun laws.

And yet another school shooting, the news of which came over wifey's Daily Kos cellphone feed yesterday a.m. barely minutes after she got her coffee. "What the hell is wrong with this damned country?" she yelped.    "Everything!" I replied, "And more than you can know as long as that human pustule blights the White House." (Referencing NY Times' Roger Cohen's  op-ed reference to "moral rot" now taking over our nation.)

She agreed and then went on to describe the god-awful news of the 16th shooting this year at a school during school hours that caused injury or death. Combined, the tally of the previous fifteen incidents is 21 deaths and 46 injuries -  this time at Santa Fe High about an hour outside of Houston. The only relatively positive aspect that could be found is that the shooter didn't use an AR-15 but a shotgun and .38 revolver. Which was bad enough, ending up killing 10 though with an AR-15 the total easily could have been doubled.

The deaths and injuries in Santa Fe happened three months after 17 students and staff were shot dead at a high school in Parkland, Florida, generating an immense amount of activism and attention, but has not so far translated into meaningful political action, well at least at the federal level. As I will show, however, a number of forward looking states have taken matters into their own hands, convinced Trump is a bought and sold whore for the NRA.


Noteworthy here - and relevant to the case I will make - is a  television journalist’s interview with  Santa Fe student, Paige Curry, which went viral on social media.   The reporter asked:
“Was there a part of you that was like, ‘This isn’t real, this would not happen in my school?’”


Curry gave a rueful semi-laugh, and replied,
“No, there wasn’t.  It’s been happening everywhere, I’ve always kind of felt like eventually it was going to happen here too.”
A truly sad declaration disclosing resignation and a pervasive learned helplessness that infects too many in this country.. But must it be so? No, not at all! TX Governor Greg Abbott declared in the wake of the incident that "this is one of the most heinous attacks we're ever seen in the history of Texas schools" then added: "We need to do more than just pray for the victims". Indeed, but what?  Since the mass church shooting in his state, then the Parkland massacre, Abbott hasn't done a damned thing to alter the dynamic so his end question of  paralysis is weird.  Meanwhile, other states have made tangible progress to dispel the "learned helplessness" in the face of NRA obstruction.

For example, Gov. Rick Scott in Florida, after Parkland, pushed the state's GOP dominated legislature and got a robust new gun law that included: implementing a red flag law that enabled law enforcement to remove a gun from a person at risk, raised the minimum age to purchase a gun, added a 3-day waiting period and banned bump stocks.

The latter is also the law now in deep red Kansas.

All of this follows  Connecticut's lead, which has passed sweeping legislation in the wake of the 2012 Sandy Hook shooting.,

As  CT  Gov. Daniel Malloy made clear on Chris Hayes' 'All In' , the states can do much more when the federal government won't.  His example, also pertains to other states, e.g. Massachusetts, which requires not only passing a state -approved gun safety course first, but also being licensed - as one would if getting a car - as well as fingerprinted.

Why are the states more successful in gaining passage of key gun laws, which seem to falter at the federal level? According to Gov. Malloy:

"Frankly, I don't think the NRA has the level of influence by demand in state capitols , because they are not paying for it.... Look, I don't care how late you come to the table, just get it done in your state.

Let me give a statistic. Last year the state of Texas saw more than 3, 500 dies as a result of gun violence. In my state it was 172.  Taking into account population difference, 12.6 per 100,000 lost their lives due to gun violence in Texas compared to 4.6 in my state. You can make your state safer.

You can be part of changing the culture that death is okay as part of some idealized notion of what the constitution says."

What were the "best practices" that Connecticut did to reduce the level of gun violence? Gov. Malloy named the following:

"In the last four years, as a result of what we did, Connecticut has had the largest drop in violent  crime of any of thee fifty states. And thirty percent better than the next nearest state. And look, it's not just about violent crime. Children are killing themselves because they found a parent's gun. How much more likely is it that someone in your home will be killed, or kill himself because of a gun, or the gun will be stolen as part of a crime.... Now at least, we also have formed a consortium of states - including Connecticut, New York and Massachusetts to do our own gun research and publish it."

Good points! Too often glossed over by the NRA's vocal minions. And as Malloy noted at the end, which ought to provoke a head snap to attention for Greg Abbott:

"I understand that Governor Abbott is embarrassed that he had a mass shooting at a church and now a mass shooting at a school, and 3,500 people a year die of gun violence in Texas. But hey listen! Join us! Do something about it and make your citizens safer by passing sensible gun laws."

Malloy's take is that states either take action like his state and Florida, or they "cower" in front of the huff and puff of he NRA.

If Greg Abbott wants to do more than say prayers in the wake of more shootings in his state maybe he ought to listen to Gov. Malloy!

Of course, if Abbott does find the courage to make common cause with Malloy, he will have to expect blowback from gun nuts, such as we're now witnessing in Boulder, e.g.

But in the wake of passage,  the hardheads, goofballs and nuts, who don't grasp there is no 2nd amendment protection for assault weapons (according to the 2008 SC case District of Columbia vs. Heller) cf.:
http://brane-space.blogspot.com/2018/02/sorry-you-have-no-constitutional-right.html
have kicked up a ruckus with a protest. This has been led by radical libertarian gun nut and talk show blowhard Jon Caldara. He is now suing the city to have his way, but my bet is he is wasting his time and money. He also needs to back away from his fake news sites and re-read the Heller decision again.