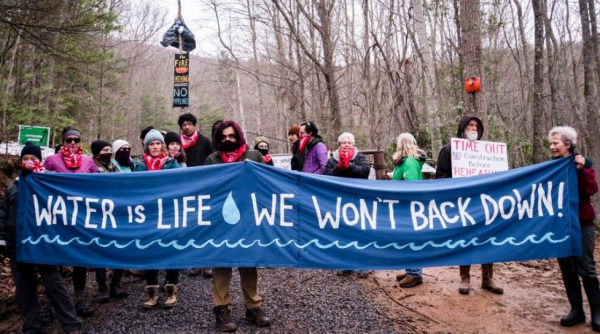 Seven years ago a  study released  by the UN Food and Agriculture Organization (FAO). showed roughly 1.3 billion tons of food was either lost or wasted globally due to inefficiencies throughout the food supply chain.  According to the report, industrialized and developing countries wasted or lost roughly the same amount of food each year – 670 million and 630 million tons respectively. But while rich countries wasted food primarily at the level of the consumer, the main issue for developing countries was food lost due to weak infrastructure – including poor storage, and inadequate processing and packaging facilities that lack the capacity to keep produce fresh.

At the time it had been made evident that food losses mean lost income for small farmers and higher prices for poor consumers in developing countries. Now we also know the exent to which food waste and losses mean wasted water resources as well.

According to a new report  published in Plos One Americans alone wasted over 25 percent of their food between 2007 and 2014.   Researchers at the US Department of Agriculture analyzed eight years of food dat  to see where food is wasted and also what members of the public say they do at meal times.  About 150,000 tons of food is tossed out in US households each day, equivalent to about a third of the daily calories that each American consumes. Fruit and vegetables were the most likely to be thrown out, followed by dairy and then meat.

This waste was also found to have an environmental toll, with the volume of discarded food equivalent to the yearly use of 30 m acres of land and 4.2 trillion gallons of irrigated water. Rotting food not only denies nutrition to a vast population that needs it but also clogs up landfills and releases methane, a powerful greenhouse gas.

Ironically, the study found that the healthiest Americans were the most wasteful, because of their high consumption of fruits and vegetables, which are frequently thrown out. Fruit and vegetables require less land to grow than  other foods, such as meat, but require a large amount of water and pesticides.

In terms of  breaking down the quantitative specifics.  the uneaten fruits and vegetables accounted for nearly 2.3 trillion gallons of water wasted, i.e. that was used to grow them (1.3 trillion for fruits, 1.0 trillion for veggies). This is serious given that a ‘State of the World’ report (2000, pp. 46-47), warned that ever increasing water deficits will likely spark “water wars” by 2025 - with more than 500 million people in a condition of water deprivation.

Fruits and vegetables  also accounted for 39 percent of the total food wasted by weight.

Lisa Jahns, a nutritionist at USDA and co-author of the study, said:

“We need a simultaneous effort to increase food quality as well as reduce food waste. We need to put both of those things out.”

Jahns’s study recommends educating consumers on fruit and vegetable storage in order to reduce food waste.  This is an excellent idea, given if we are going to expose our bodies to carcinogenic pesticides in growing the veggies, we ought to be sure they are consumed not tossed out.

“Consumers aren’t connecting the dots, [and] they don’t see the cost when they throw food in the trash. At the same time, we don’t want to undermine legitimate food safety concerns and we need to be aware it’s not just the cost of food that’s the issue. It’s the time and energy required to prepare and store food, which often isn’t a priority in a busy household.”


The report, by the Center for Biological Diversity, found that just four of the 10 largest grocery chains in the U.S. have specific food waste reduction commitments. A further four out of the 10 don’t prevent the waste of food considered too cosmetically “imperfect” to sell. Walmart achieved the highest grade, a B, while Aldi US was the worst with an 'F. Trader Joe’s, Target and Whole Foods all did poorly, with a D.

Jordan Figueiredo, who runs the “Ugly” Fruit and Veg Campaign and collaborated on the report told The Guardian UK

Perhaps the most severe indictment for food waste comes against the healthy eaters.  Indeed, the study found "the higher the diet quality the more food was wasted"


Maybe this is one more reason we need to ditch the healthy eating craze given we already know it leads to higher medical costs too, e.g.

Want a more comprehensive tally of waste? In “Junk Planet”, Robert Burrowes  provides a comprehensive description of the degradation of the atmosphere, oceans, waterways, groundwater, and soil as well as the modern pollution of antibiotic waste, genetic engineering, nanowaste, space junk, military waste and nuclear, a description of a planet degraded by pollution impacting our bodies and health as well as the planet’s future.