Question: Can you please explain magnetic helicity - with examples - as applied to the solar environment?   Use any math you need as I have taken advanced calculus! :) 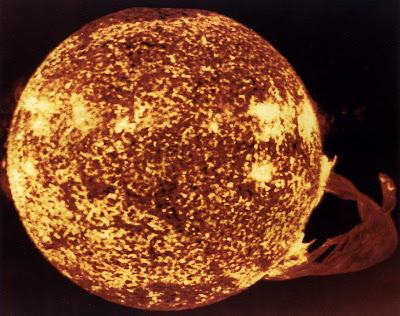 It is good to know you have an advanced calculus background, since to really get at the nitty gritty of helicity - say beyond the "show and tell" stage, one needs some mathematical background. Preferably in differential and integral calculus.


But first things first. It is possible to obtain at least a basic conceptual notion of helicity by doing a simple geometrical exercise which I did in high school and I am sure you probably have as well.

That is, to construct a Moebius strip.  To do this very easily, you can simply cut out a rectangular strip of paper with the rough dimensions shown below:


Now take the strip (of length L) and put a kink or half-twist into it about two –thirds from one end, then tape the free ends such that points ab meet ba in that order, i.e.  when taping the ends ensure a to a and b to b.. What you will have is called a Moebius strip. The Moebius strip has one part twist and one part writhe and this is the fundamental basis of helicity. You can get a pictorial idea by going to:


“Magnetic helicity” was probably first introduced by K. Moffat in the late 1950s as a topological invariant that describes the complexity of a magnetic field. Like the pure tolpological helicity, this magnetic helicity also has “twist” and “writhe” components. It is written as a function of the vector potential (A) and the magnetic field (B), and measures the topological linkage of magnetic fluxes (F)


The magnetic helicity H of a magnetic  field B within a volume V is defined:

the vector potential A satisfies:

Here A is the vector potential. From Taylor’s hypothesis, the above integral is approximately invariant- so the minimum energy configuration is a “constant-alpha” force free field, e.g. curl B = aB

In actual working solar conditions, one prefers a gauge-invariant form of H and this is provided by the “relative helicity” – wherein one subtracts the helicity of some reference field (Bo, e.g. associated with  a= 0) and having the same distribution of the normal component of B on the surface (S).  As we see, with a= 0  then J = 0, B = 0.    This is a current-free field given  curl B = 0.  (e.g. Ñ X B  = a B  = 0)   Another way to put this, is that such a solar configuration represents a "potential field" i.e. which has zero free magnetic energy stored.  Then:

The  magnetic storage capacity takes on actual values as the field departs from the potential and we get non-zero a  showing a measure of shear.  It is hypothesized that shearing and twisting of the field “injects” helicity and that this may be useful in quantifying: a) how much magnetic free energy becomes available, and b) whether instability can be predicted based on observed indicators of helicity at the level of the photosphere-chromosphere.

For example it may be possible to resolve H r  observationally into two components such that:


where term (1)  on the right side refers to the “twist” and term (2)  to the “writhe” (a topological function of the specific geometry observed)  An illustration depicting acquisition of both forms of helicity is shown in the graphic below:

Images of rising solar loops: On the left side the loop features only internal twist, on the right the loop has writhe as well as twist. (From DeMoulin and Berger,  Solar Physics, 2003)
Theoretically, even if   (d H r / dt)   = 0, the writhe term is non-zero, hence a residual helicity remains. This is why conservation of helicity defines a specific constraint such that no magnetic field with finite total helicity can relax to a potential field (Demoulin et al, 2006)
We see evidence of the Sun’s magnetic helicity in the solar corona as well as the solar wind that streams past Earth. In eruptive prominences, for example see the one in the attached image, we actually have the graphical detection of the twist and writhe (or helical structure) associated with topological helicity – and which is magnetic helicity in the Sun’s magnetic environment.

Also, if you carefully inspect and study the prominence in the upper right of the image in the link below, you can discern both twist and writhe in the plasma filaments. Evidently then, prominences are capable of transporting magnetic helicity in the solar corona.

http://antwrp.gsfc.nasa.gov/apod/ap060416.html
The magnetic helicity is also visible in the gas filaments of the prominence depicted in the lower left of the image from the link below:

Solar eruption, especially coronal mass ejections (CMEs) carry magnetic flux as well as helicity from the Sun. When the erupted magnetic field reaches the Earth it interacts with the magnetosphere, causing magnetic substorms and auroras.

Some recent research also reveals remarkable aspects of magnetic helicity in the solar environment. For example, it seems that magnetic helicity of different signs or polarities (+ or -) can occur, depending on which hemisphere of the Sun it’s measured.

Specifically, the sign of helicity will be positive or negative, depending on what is known as the “hemispheric helicity rule.” That is, the force-free  a  characterizing each active region will have a tendency to be (+) in the southern solar hemisphere, (-) in the northern solar hemisphere.
When you think about it, this makes eminent sense. (Think of the Coriolis force causing a preferred sign or handedness, relative to convective flows in the northern and southern hemispheres of a planet like Earth) If there is a preferred “handedness” (or chirality) associated with magnetic flux, it would be expected to exhibit a different sign in each hemisphere.

Observations confirm that this sign asymmetry exists throughout the solar atmosphere: in the corona, the solar wind and the photosphere.