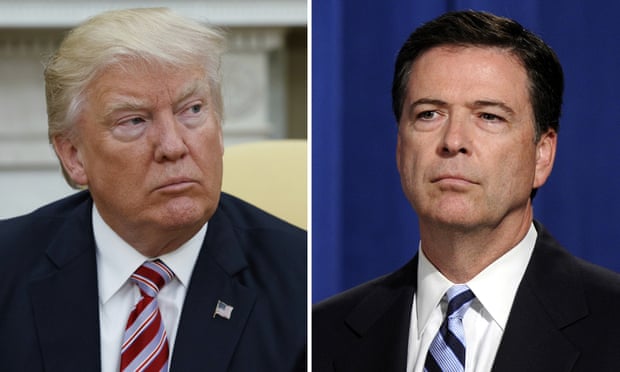 No contest: Between the degenerate on the left, and James Comey - who exposes every  bit of vile filth we've come to expect from this administration in his new book.

I really haven't been that surprised or amazed to read the accounts of James Comey's new book, 'A Higher Loyalty: Truth, Lies and Leadership', which bluntly denounces Donald Trump as “untethered to truth” and likens the maggot to a Mafia boss, specifically "Sammy the Bull."   Mr. Comey ought to know as he's had to prosecute riff raff like that in his early years with the Bureau.  But, other than the more recent ugly details of the nature of the Trump cabal in power, we already knew most of what Comey has written.

For example, author David Cay Johnston in his book, 'It's Even Worse Than You Think',  documents a mother load of Trump's early crimes and how he manipulated the system.  Johnston in an appearance on Chris Hayes'  May 6, 2016  All In,  reminded one and all that back in 1990, the deadbeat  con man  couldn't pay his damned bills- even though he claimed to be a billionaire. But he got bailed out because the state of New Jersey Casino Control Division took his side against his bankers - to whom he owed tons of money. In Johnston's words:

"It was government intervention in the market that saved him."

That defined this lowlife's  modus operandi: getting the state governments or others to bail him out after he piles up tons of debt. Or, he just leaves victims (errr. suckers)  to suck salt, like those who fell for his Trump University balderdash.

In Comey’s book, obtained by The NY Times, as well as The WaPo and Guardian, the former FBI chief describes his first trip to Trump Tower in January 2017, to brief the president-elect about the links to Russia documented in the Steele dossier , i.e.  compiled by the former British spy Christopher Steele. (As I've already written I've read it myself and find nothing amiss or beyond belief as regards Trump or what he'd do. He is a bottom- feeding maggot after all!)

Comey noted with some descriptive flair that Trump “appeared shorter than he seemed on a debate stage with Hillary Clinton”, but this is likely because: (1) TV stages create misleading optics, whereas (2) In RL his BMI is in the "obese" range (30-31)   So his actual height (6' 1") appears truncated owing to his girth, flab. (Aides report him unable to button his suit coats.)  . Comey also added: “His face appeared slightly orange, with bright white half-moons under his eyes where I assume he placed small tanning goggles, and impressively coiffed, bright blond hair, which on close inspection looked to be all his. I remember wondering how long it must take him in the morning to get that done.”

The orange hue we already knew about, and it has been a source of comedy for Bill Maher and others, i.e. because the Dotard likes to use creams that impart fake tans.  So this isn't really big news, but hell, Comey ought to be allowed to offer descriptive turns of phrase when he sees fit. The nervous Nellies and wimps - like CBS' John Dickerson this morning - who whined about potentially lowering discourse, need to grow up and let Comey be Comey. Besides, the former G-man deserves some shots after the way Doturd fired him!


Comey then described discussions by Trump’s team regarding the political implications of the Russian intervention as well as the Steele dossier and possible strategies when it made the news media, all while intelligence community leaders remained in the room.  The Trumpies'  main concern (especially Reince Priebus)  was how to portray the meet as a positive PR encounter. With Comey thinking,  as this meet  goes down,  how the Russkies just tried to get Trump elected, leaving him wondering if he needed to give Trump and Co. a "lecture on how to behave" i.e. with the intel personae.

Pretty quickly, Comey learned by their use of body language and lingo where the direction was going, and the extent to which the meeting resembled meets with Mob bosses.
“Holy crap,” Comey exclaims at this point, “they are trying to make each of us an ‘amica nostra’ – a friend of ours. To draw us in. As crazy as it sounds, I suddenly had the feeling that, in the blink of an eye, the president-elect was trying to make us all part of the same family.”


No wonder the perceptive Comey repeatedly likened  Trump’s presidency to a “forest fire”, in the 304-page book  while painting Trump as a Mafia-style boss.


For example, in a discussion of a White House meeting with Trump and then chief of staff Reince Priebus in February 2017, Comey writes  that “because he never stops talking”, Trump “pulls all those present into a silent circle of assent”.

This ought to be familiar to anyone who's known or worked for a CEO or boss who is a legend in his own mind and believes he can out -yak underlings into submission. Until told by someone with cojones to STFU.


“The encounter left me shaken. I had never seen anything like it in the Oval Office. As I found myself thrust into the Trump orbit, I once again was having flashbacks to my earlier career as a prosecutor against the Mob. The silent circle of assent. The boss in complete control. The loyalty oaths. The us-versus-them worldview. The lying about all things, large and small, in service to some code of loyalty that put the organization above morality and the truth.”


Of Trump’s now famous demand over dinner at the White House in January 2017,  i.e. “I need loyalty”, Comey wrote: “To my mind, the demand was like Sammy the Bull’s Cosa Nostra induction ceremony – with Trump in the role of the family boss, asking me if I have what it takes to be a ‘made man’.”
Comey's interpretation ought to resonate with anyone who's watched any Mafiosi movies, including 'The Godfather', 'Godfather II, 'Goodfellas'  and others, and knows "made man" refers to submitting to the Don.  One basically bows or kneels to kiss the top gangster's ring and that  signals total obeisance,  absolute loyalty. You don't renege on that unless you want to end up like Michael Corleone's pathetic, back stabbing brother,  Fredo.
But clearly Comey grasped the meaning and the deplorable suggestion. Little wonder that encounter prompted much more rigorous note taking to capture the atmosphere of the crime family that had taken over the White House and now has the nation in its toxic grip.

The WaPo's Philip Rucker also notes how Comey described Trump as having been obsessed with the  portion of the Steele dossier dealing with the urinating prostitutes.  Trump raised it at least four times with the FBI head  and "was eager  to prove the allegations weren't true" - i.e. that he had prostitutes perform golden showers on the same bed the Obamas slept in when they were in Moscow.   But his over eagerness to dismiss simply showed me Trump's consciousness of guilt is all consuming, especially after Comey told him flat he wasn't saying the FBI believed the allegation.

Despite this, Dotard rambled on about how bothered he was "if there's even 1 one percent chance Melania believes it".    Well, he ought to have thought about that before doing it!  And look we know damned well that "piss tape" is out there, likely in Putin's paws to drop at just the right moment. Maybe after Trump sends  cruise missiles into Syria.

But again, one doesn't need to get Comey's book to know Trump is a depraved mutant and common thug, you merely have to take note of his thuggish actions, and the multiple attacks on James Comey as well as Robert Mueller. . In the latter case, actually phoning the lying renegades at FOX News and encouraging their talking shitheads to dump on Mueller about getting fired by Trump.   Thus we've heard these illustrious ravings:

From an innominate,  breathless Bimbo on Monday afternoon:

And from Loony Lou Dobbs, frothing at the mouth:

"I would fire the SOB in three seconds."

And from some fat-faced fool blabbing on Monday:

"The attorney general is incompetent, the FBI is corrupt, and Robert Mueller and Rod Rosenstein are unethical and abusive of the legal process. All of them deserve to be fired."

And from top Trump ass kisser Sean Hannity (with a bulletin board in back featuring Mueller's photo with lines drawn to underlings):

And a parade of other assholes and asswipes as presented in a collage of segments on Maddow last night.

Bear in mind these odious fucktards are spewing lies and propaganda about a rock-ribbed REPUBLICAN  not some flame throwing liberal.  But they are committed to doing this to feed Trump's ignorant and disgusting base-  the "bottom half of the IQ curve" that put Trump into office, in the words of Harvard lecturer Harvey Mansfield (WSJ,  Weekend Interview, March 31)..

The  FOX  rabble rousers also know when and if an indictment of Trump does come it will set off a constitutional crisis and possibly a civil war between the backward loon Trumpkins and the rest of us. As I wrote before, a united nation cannot stand when up to 40 percent don't subscribe to actual news or facts but accept lies instead.  That automatically implies two nations at odds with each other.

For those who may believe Comey exaggerates in his book remember Trump's gangster life began in his early teens when he fashioned specialty switch  blades to stab alley cats to death that roamed his Queen's neighborhood.  The discovery of the switch blades motivated his parents to send him off to a New York military academy.   So Trump's thug -gangster nature preceded his ascension to power.
This is the thug we now have occupying  (and defiling) the highest office in the land.  In an epilogue, Comey passes judgment on Trump’s character, as if we needed to read what we already know. . He writes that “our country is paying a high price” for the 2016 election, adding,  “This president is unethical, and untethered to the truth and institutional values. His leadership is transactional, ego driven, and about personal loyalty.”

As expected the Reeptard trolls - namely the  Repuke National Committee (RNC) has set up a "war room" to try to defame Comey.  To that end,these turds and vermin have set up their specious rebuttal website. (“Lyin’ Comey') to give cover to a degenerate fellow traitor and mob boss wannabe.  What's the scumball quotient for the RNC?  One indicator is that Elliot Broidy - one of its honchos- resigned after it was learned Michael Cohen had to pay out $1.6 million to "fix" his impregnation of Playboy model. (She subsequently used part of the money for an abortion of his love child')  No, you cannot make this crap up!

What is so funny is that these Reeptardo fools need to recruit Hillary's  missing email fiasco and Comey's blabbering on it 10 days before the election - which they cheered at the time.  But what do you expect of degenerates too cowardly to criticize the biggest threat to the Republic in modern history?
These scum will have plenty of time to repent at leisure, after the Dems seize the House and very possibly the Senate in November.  At that auspicious time, hopefully, the new House Dems will go after the RNC traitors too!

Posted by Copernicus at 9:39 AM