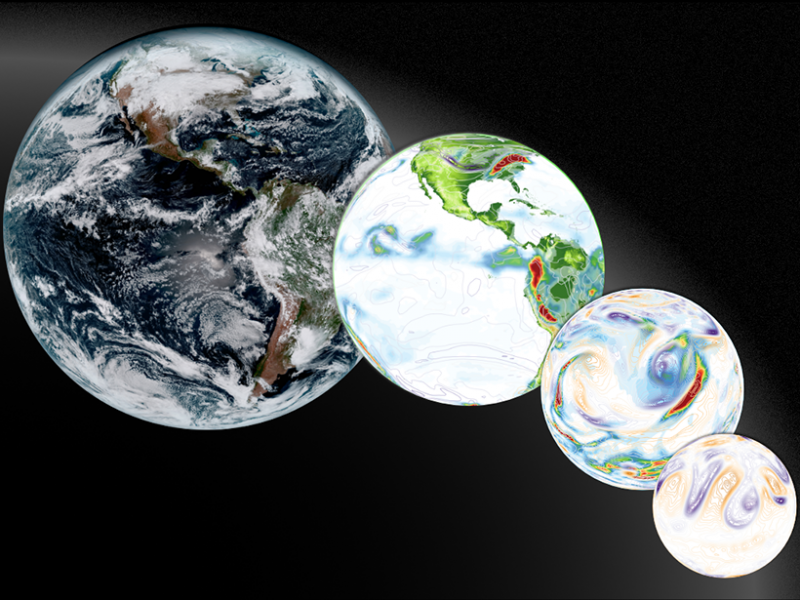 Clockwise from top left, a satellite view of Earth, a complex Earth system model depiction, a simpler aquaplanet configuration, and the simplest dynamical core. This hierarchy of models is now being supported by the Community Earth System Model project. Satellite image: NASA; design by B. Medeiros.

An ongoing problem with climate science modeling concerns: 1) the high level of complexity of most models, and 2) the intrusion of quacks and climate know- nothings. The latter set includes Steven Milloy with his "Junk science" site when he is the one peddling it (see e.g. 'The EPA Cleans Up Its Science', WSJ op-ed, March 27). I argue the two are connected because with the complexity of too many climate models, the opportunistic interjection of quacks and nitwits is almost assured. (Milloy himself is an attorney - not a climate researcher or even physical scientist).
Let's note here that thirty years ago,  the development of so-called Earth system models (ESMs) was still decades away. One of the earliest climate researchers to conceive of these advanced system models was Prof. Gunter Weller of the Geophysical Institute at the University of Alaska-Fairbanks, e.g.

By late 1986  Weller had shown the abnormal heating of the Arctic to be some 5 - 7F greater than the continental U.S.  The ice cores available at Dr. Weller's  Atmospheric Physics lab were extracted from Arctic ice at depths corresponding with geological time frames dating back over 80,000 years. His results showed that the greatest ambient temperatures corresponded to the highest CO2 concentrations recorded in the ice cores.  What he envisaged was an advanced Earth model to integrate these results but the computers of the time were not up to the task.

Today, the .vast majority of computing  resources for climate modeling are dedicated to potential use in ESMs.  These are constructed to numerically simulate Earth’s climate with the greatest possible faithfulness, so are designed to include the most comprehensive range of physical, chemical, and biological processes that can be handled on today’s powerful computing systems. The problem is not all academic sites have such systems..
For reference, Isaac Held alerted the climate science community to a widening divide between simulating and understanding the climate system more than a decade ago. He noted that a gap had developed between idealized models, which can sometimes be thoroughly understood, and the complex, high-end models (such as ESMs) that comprehensively simulate the climate system but cannot be completely understood because of their complexity.
This gap is particularly problematic for many researchers and students, who often have to work with limited computational resources. Furthermore, simple climate models are key to educational activities in university classrooms and as part of graduate research: They provide an entry point that enables students to master modeling techniques and concepts before moving on to more complex methods.


The complexity of these ESMs arises from the need to generate the most accurate projections of climate change in the coming decades. These projections play a crucial role in the assessments of the Intergovernmental Panel on Climate Change; they also inform climate-related decision-making in a wide variety of sectors. It's important to recognize here that while ESMs may be good for simulating the climate system they may not be as valuable for understanding it.  This was Isaac Held's contention, and it was also Gunter Weller's major concern as early as 1986 when he himself was limited to numerical models based on FORTRAN code.
This computing resource bifurcation has motivated climate researchers to add a new set of tools within the Community Earth System Model (CESM) project: a hierarchy of simpler models to foster better understanding.  An added benefit of such simpler models would be to more easily expose climate cranks like Milloy, as well as more familiar climate denier culprits such as Willie Soon- whose arguments ought to be more easily exposed for review and critique in the simpler context.
For example,  Milloy's WSJ op-ed was subsequently skewered in a follow- up WSJ letter by Brian Combs ('Getting the Science Right For EPA Regulators', WSJ,  Mar. 31- April 1, p. A14.)  Combs first noted Milloy's being only an attorney (like EPA arsonist Scott Pruitt) and also the spurious ploy of trying to tie mortality from (small) particulate pollution  to death certificates. Milloy stated in his WSJ  op-ed that "I found in 2012 I could get California death certificate data in electronic form" and it was :scrubbed of all personal identifying and private medical information".  He then claimed (ibid.): "Some of my colleagues used this data to prepare a 2017 study which found PM2.5 (dust and soot smaller than 2.5 microns in diameter) was not associated with death.."

But as Combs pointed out, the nature of the data for PM2.5 as well as on the death certificates was simply "too minimal  to draw any significant conclusion." So Milloy's efforts make about as much sense as trying to tie close Martian oppositions to increased UFO sightings on Earth.  Combs also noted the failure of Milloy to provide any reference for his study on his JunkScience.com website.  Hence, "readers can't evaluate its conclusions or  whether it was published in a peer-reviewed journal".  But clearly, if the data sets were too "minimal" to reach a satisfactory statistical conclusion, there's no way they'd be published in any serious climate journal.

Milloy boasts that the "best thing is if you d0n't believe the result you can get the same data for yourself and run your own analysis".   But why would anyone do that? Why extract the same low signal (high noise),  minimal data to replicate a meaningless result? Has Milloy ever heard of  the old computer saw:  "garbage in, garbage out"?  My lack of belief is tied to his inability to get a paper based on these results published in a proper climate  journal. It isn't contingent on replicating his same junk analysis and getting the same junk result.

But as I've stated time and time again, this is the hallmark of the classic climate crank: making bold or bald assertions with no citations or references from peer-reviewed papers in real climate science journals. This as opposed say to biased fluff appearing on the website of the conservative George C. Marshall Institute. Say from the likes of climate babblers  Will Happer, or Sallie Baliunas.  Happer himself is a "physicist "at Princeton  - which kind of destroyed my image of that venerable institution and its allegiance to academic quality. I mean what does it say about a place that happily entertains climate hacks?
Anyway, in the U.S. the CESM project is now the natural choice for building a solid hierarchy of climate models. The models,  made available under the CESM project,  are developed, maintained, and documented specifically to serve the entire community of climate scientists. That means that even climate frauds like Willie Soon, Sallie Baliunas and Steve Milloy can take advantage of the resources - as can climate hack Will Happer at Princeton.
Quality assurance is also applicable to the CESM project. It has a wide user base given all released model versions are thoroughly tested and routinely ported to the latest machines available. This is an arduous task not easily accomplished by individual investigators in a typical university setting. Crucially, the CESM can be freely downloaded and used by anyone. Again, that includes climate contrarians like Will Happer, Steve Milloy, Steve Koonin and others.
In the meantime, the AGU personnel promoting wider participation (e.g. L. M. Polvani, A. C. Clement, B. Medeiros, J. J. Benedict, and I. R. Simpson)are requesting contributions to  work already underway for so-called single-column configurations, i.e.  of both  atmosphere and ocean models.   For those interested in cooperating in "filling up levels of the models' hierarchy" they recommend the following guiding principles for moving forward:


1) There should be a clearly demonstrated need for a simplified model.


2)The community members spearheading each effort need to pair up with one or more partners at the National Center for Atmospheric Research to collaborate in the model development.


3) Project leaders must assess the resources needed to develop the new simpler model and identify some avenue for funding the development.


4) Developers of simpler models should submit scientific papers to the peer-reviewed literature, explaining the rationale for the usefulness of the new models and describing what novel understanding of the climate system is to be gained from using these simpler models.


The above cited Eos authors add:
"Ideally, these activities would be coordinated across the community to avoid duplication of efforts."
It would be terrific to see the likes of Milloy, Happer, Koonin et al cooperate in such a  CESM venture but I don't anticipate it any time soon. They are all too enthralled by the fake power embodied in their contrarian stance and the extra column space garnered in op-ed sections - like the WSJ's.

Which merely shows me that none of these pretenders is interested in doing serious climate science.

"As a public health  scientist seeking a broader perspective, I consulted a January 2016 Journal of Thoracic Diseases review of over 50 peer-reviewed epidemiological and experimental studies - virtually all of which find significant evidence of increased mortality and of pathological lung damage associated with exposure to PM 2.5 particles."