Pope Denies Existence Of "Hell" - Why The Big Fuss?

As reported in the weekend WSJ ('Shifting Lines: Pope's Uncertainty Principle'  p. A9, Mar. 31- April 1) Pope Francis evidently denied the existence of a cornerstone of Roman Catholic "boogeyman" doctrine in a recent interview. We read:

"For Pope Francis the unconventional has become routine. Still, the news Thursday morning was startling. Italian journalist Eugenio Scalfari, a friend and frequent interviewer of the pope, reported that the pontiff had denied the existence of hell.  Sinners who die without  achieving eternal salvation 'are not punished' the pope said, according to an article by Mr. Scalfari in the Italian newspaper La Repubblica"

The Pope added for clarity:

"There is no hell. There is the disappearance of sinful souls."

Of course, as the author (Francis X. Rocca) points out, the Vatican's fossils quickly went into panic PR mode, trying to spin the account away from core doctrinal denial.. After all, what good would it do if nearly a billion Catholics weren't kept quaking in their boots by the threat of hell?  So, the Vatican did the only thing they could, short of denying the pope denied hell - they insisted Scalfari's article was a "reconstruction" - as opposed to a transcript of his conversation with Francis.

In truth, one wonders why the big kerfuffle erupted given simple, consistent but rigorous exercise of logic would disclose hell is a confection, a fiction.  The pope's denial of hell in this context is merely a manifestation of his invoking critical thinking and logic as opposed to blind adherence to an archaic doctrine..  The  basic logical contradiction inherent in the hell concept can be encapsulated by the diagram shown below: 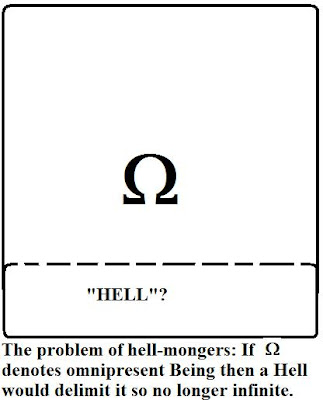 This presumes a "punishment partition" in infinite Being leading to the Hell-Infinite -God paradox. The claimed "infinitude" (or omnipresence), e.g.  of an infinite deity is contradictory to the acceptance of a Hell.  This is provided one grants that "infinite"literally  means everywhere or pervading all of Being.

In such a case there is literally no place left where - whatever it is- doesn't exist. Hence, if applied to "God" it means all inclusive of reality. Including ALL transcendent reality, assuming such exists.

The diagram shown illustrates the point. The whole vast field defined as "Omega" (Greek symbol) is taken to be one unitary Being or "God". It is taken to be literally infinite, meaning occupying all Being, all there is. (I am assuming Catholics, like most Christians, take "infinite" literally not as "occupying most regions" but not all.  If the latter, then the Being is not infinite but finite - and hence a finite deity.

If one appends a Hell, as say a "punishment partition",  then this infinite Being is now delimited. In other words, it ceases to be infinite (or omnipresent)  since its Being is foreclosed where Hell exists, unless one would argue that Hell is part of God. Most Catholics I know don't wish to "go there".

Thus, if Hell is asserted to exist and is claimed to be "eternal" then God cannot be infinite. If God is maintained to be infinite - meaning all inclusive of Being- the only conclusions possible are that either a) Hell doesn't exist, or b) Hell must be a part of God's Being!

By this exercise in logic, Pope Francis would be perfectly justified in denying the existence of Hell because it is logically contradictory to the concept of God as infinite unitary Being. Up to now, I've not seen or heard any religionist able to refute this logic, even by resort to the most twisted semantic somersaults.

But what about the pope's claim that the sinners just "disappear" - as in wink out of existence? This really isn't that much of  stretch and most atheists already believe this applies to everyone, not just them.  Think of it like a general anesthesia from which you never wake up.

Under general anesthesia - as I've been, three times in the past two years- there is no consciousness of any temporal passage. You are knocked out one second, then after the operation or procedure, you come back to consciousness. It is as if no time has elapsed - even hours - between going under and re-surfacing in the hospital recovery room.

If  you died while under general anesthesia - say if the operation went  badly wrong - would you notice it? I doubt it. It would simply be a case that you never transition back to consciousness.  It would be as if you never "woke up". This is the form of extinction the pope is referencing for "sinners",  but again which most atheists take to be the final end to shuffling this mortal coil anyway. (Atheists do not subscribe, at least most of them, to the 'natural afterlife' idea which requires accepting a subjective time whereby a  final "dream state" can transform into an eternal state of afterlife, independent of consciousness.)

WSJ author Rocca cites Brit correspondent Christopher Lamb who sees the pope's anti-doctrinal stance as consistent with 'a move away from the institutional and doctrinal and toward a greater focus on personal conscience" which is good.   In addition, under Francis the Vatican's doctrinal office has more or less backed off on issuing judgments including on controversial questions of sexual and medical ethics.  This also comports with Francis' efforts to liberalize moral teachings, including on divorce, and artificial contraception.

My take is that Francis sees this liberalization as essential especially after the Church lost vast moral capital in the wake of the priest sexual abuse crisis.  Thus, for the Vatican's doctrinal obsessives to double down on their moral dicta - say to do with any number of behaviors, especially sexual - would simply drive more reflective Catholics away..

Francis then, at least has the  sense to acknowledge he's playing on a losing wicket, and to make the most of it instead of pretending the opposite.