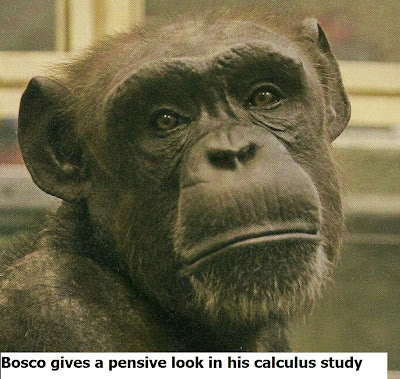 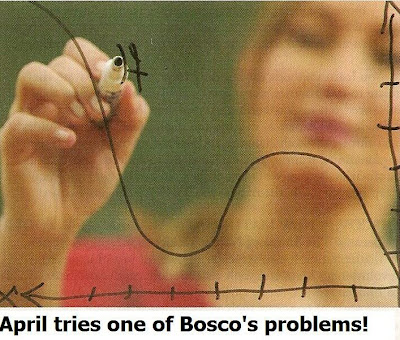 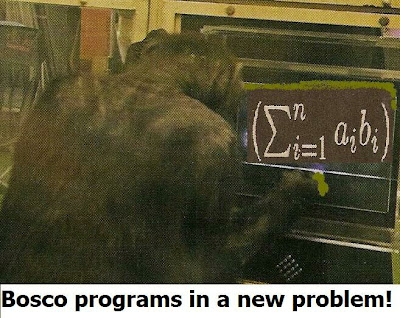 Bosco the chimp has found a new line of work after being rescued from a lab for cosmetics testing. He’s now got a new lease on life teaching AP Calculus to a home-schooled girl in Evansville, Indiana. 16-year old April Janelle Furst has been trying to get a handle on her AP Calculus for the past five months, to no avail. Her parents have since begun to home school her, and have recruited Bosco the chimp to assist.

According to April’s Mom, May Furst, Bosco has his own office in the unused garage, including access to a computer and monitor that enables him to not only use the standard symbols of calculus –including integral signs, and summation symbols, but also to export them into computation programs like Mathcad, and transmit the results to April, sitting at her computer inside her bedroom. There, April also has a transparent screen on which she can work out the calc problems assigned by Bosco.

“Sometimes his problems are really, really hard!” she chirps. “But if I run into a road block, he’s always happy to help me out! And all I need to do is pay him a few bananas and coconuts a day!”

Bosco’s abilities in math first came to light at the lab where he underwent experiments. On one occasion, when a sheet of paper accidentally got pushed under his cage, he scratched in what looked like derivatives, and integral signs. His handlers, amazed at the discovery, believed that the chimp had way too much math talent on offer to be subjected to painful injections of assorted chemicals for the cosmetic industry. So they put out ads on his abilities, and offered him for sale to the first kind owner who could pay $100. Harvey Furst saw the ads, and arrived within a day after their initial appearance, to bring home the genius chimp. He hasn’t regretted it yet.

"I must say, he also has marvelous hygiene habits and knows how to use the toilet in the garage. This is one exceptional ape!"

What does all this mean for standard evolutionary theory? Maybe that it will have to be revised to account for some chimps having at least as much brain power (or more) than certain pretend pastors from Florida! April is convinced, observing:

“Bosco is also terrific at games of strategy, including chess and GO. I am sure he could wallop that pastor’s behind without even batting an eyelash! Besides whenever he sees a picture of the guy, Bosco goes bonkers.”

In the meantime, April has now returned to work on her latest problem from Bosco: to find the minimum of a third degree curve, f(x) = x^3 - x^2 + 2, and show how she obtained it (see image).
Posted by Copernicus at 7:18 AM